The first round of WSK Super Master Series is underway

The opening round of WSK Super Master series started in Adria in the best possible way with another weekend of great international karting after the first round of the season that took place last week also in Adria in occasion of the WSK Champions Cup.
The presence has been quite high also in this occasion and the challenge announces to be exciting in this opening round of WSK Super Master Series. More than 340 drivers from 50 countries gathered, in fact, in Adria to compete in the four categories KZ2, OK, OKJ and MINI. This is a positive start to the season with a lot of interesting themes that has the main manufactures, international teams and talented drivers as the protagonists. 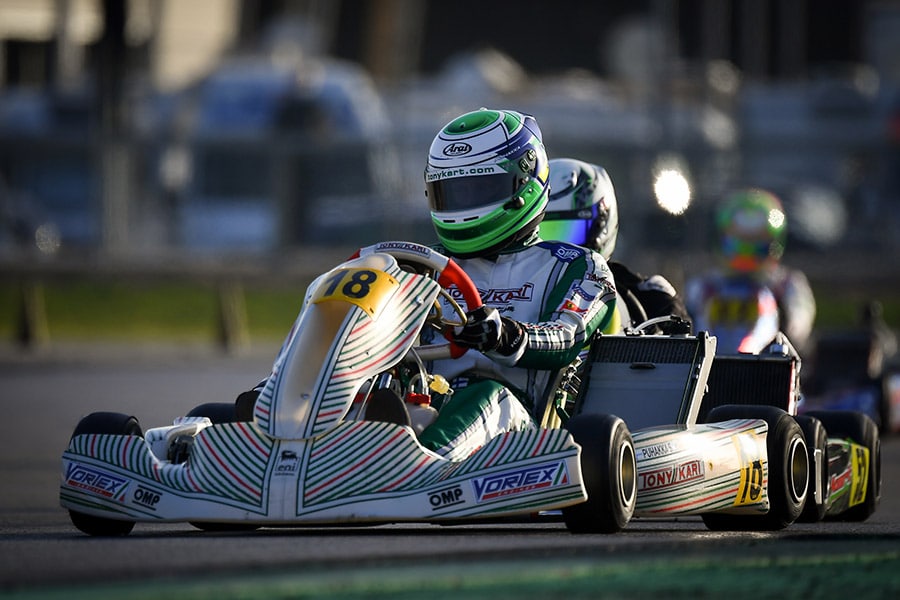 Qualifying.
The weekend officially kicked off with qualifying practice in the morning. The pole position of KZ2 went to the recent winner of the WSK Champions Cup: the Swede Viktor Gustavsson (Leclerc by Lennox/BireART/TM Racing) completed his best loop in 47.691s, while the Finn Simo Puhakka (Tony Kart Racing Team/Tony Kart-Vortex) went quickest in Series-1 in 47.828s. The fastest of OK was the Italian Brando Badoer (KR Motorsport/KR-Iame) in 48.040s, while his teammate Arvid Lindblad topped the charts of Series-2 in 48.091s. In the three series of OKJ, the British driver Freddie Slater (Ricky Flynn/Kosmic-Vortex) posted the fastest time in 49.690s, while the winner of the WSK Champions Cup Rashid Al Dhaheri (Parolin Motorsport/Parolin-TM Racing) was the quickest of Series-3 in 49.826s and the German Maxim Rehm (Ricky Flynn/Kosmic-Vortex) set the pace in Series-2 with his best lap completed in 49.842s. In the 4 sessions of MINI the Russian Gerasim Skulanov (CRG Racing Team/CRG-TM Racing) was the fastest in 54.640s, while the quickest of Series-2 was the Chinese Zhenrui Chi (Baby Race/Parolin-Iame) in 54.807s, in Series-4 Kian Fardin (Team Driver/KR-Iame) topped the charts in 54.939s and the Pole Juliusz Ociepa (KRK Racing/Energy-TM Racing) did the same in Series-3 in 55.075s.

Lindblad and Tsolov on top in the two heats of OK.
In the two heats of OK, the British driver Arvid Lindblad (KR Motorsport/KR-Iame) led the winner of the previous race and teammate from Brazil Rafael Camara in the “A-B” heat, while the Bulgarian Nikola Tsolov (DPK/KR-Iame) proceeded the Italian Edoardo Ludovico Villa (TBKart/TBKart-TM Racing) in the “C-D” heat.

OKJ, double win to Slater.
A total of 5 heats have been run in OKJ. The victory of the “A-B” heat went to the Brit Freddie Slater (Ricky Flynn/Kosmic Vortex), who was followed by Rashid Al Dhaeri (Parolin Motrorsport/Parolin-TM Racing), while the German Maxim Rehm (Ricky Flinn/Kosmic-Vortex) proceeded Sonny Smith (Sauber/KR-Iame) in the “C-D”, and the Chinese Yanpu Cui (KR Motorsport/KR-Iame) led the Japanese Kean Nakamura Berta (Forza Racing/Exprit-TM Racing) in the “E-F”. In the “A-C” heat Slater won again from teammate from Asia Dion Gowda and the Brazilian Matheus Ferreira (KR Motorsport/KR-Iame) won “D-F” as Nakamura came second again.

9 heats run already in MINI. Skulanov and Przrowsky on top.
In the nine heats of MINI, the Thai Enzo Tarnvanichkul (Team Driver/KR-Iame) won the “F-G” heat. The winner of the previous round, the Dutch René Lammers (Baby Race/Parolin-Iame) won “D-E” at the end of a comeback race, Kilian Josseron (Team Driver/KR-Iame) came first in the “B-C”, the Pole Jan Przrowsky (AV Racing/Parolin-TM Racing) in the “A-G”, the Asian Tiziano Monza (Sauber/KR-Iame) in the “B-E”, René Lammers won again “C-D”, the Russian Gerasim Skulanov (CRG Racing Team/CRG-TM Racing) the “A-B”, the French Jimmy Helias (Tony Kart Racing Team/Tony Kart-Vortex) won “D-F” and the Spanish driver Christian Costoya (Parolin Motorsport/Parolin-TM Racing) the “E-G”. At the end of the 9 heats, Skulanov and Przrowsky have the same number of penalties and are followed by Lammers.