WSK Champions Cup heading towards the grand finale in Adria 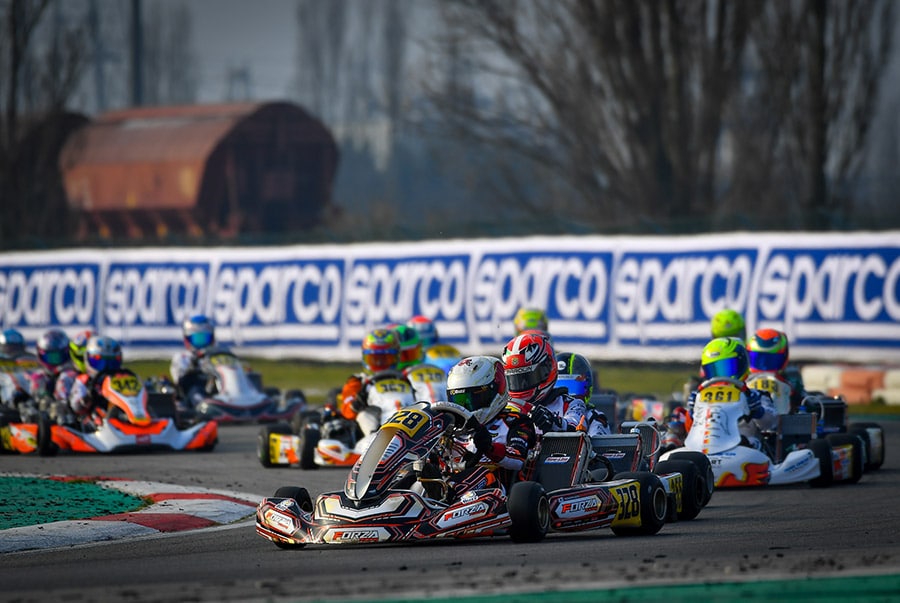 The WSK Champions Cup in Adria is all set for the grand finale that will take place on Sunday, February 21st. This is going to be the top moment of this opening weekend of the international karting 2021 season that saw 337 drivers on track out of the entered 350 in the four categories MINI, OKJ, OK and KZ2.

Renaudin, Gustavsson and Celenta on top in KZ2.
A big battle is ahead in KZ2. The French Adrien Renaudin (Sodikart/Sodikart-TM Racing) took the lead of the classification thanks to a second win on Saturday, but he will be challenged by two other strong contenders like the Swede Viktor Gustavsson (Leclerc by Lennox/BirelArt-TM Racing) who won two heats on Saturday, and the Italian Francesco Celenta (Parolin Motorsport/Parolin-TM Racing), who claimed the second win on Saturday after the one secured on Friday. All the three drivers have the same number of penalties! Among the favourites to the win, the Dutch Senna Van Walstijn (CPB/Sodikart-TM Racing) had to retire from a heat due to an incident, while the Finn Simo Puhakka (Tony Kart Racing Team/Tony Kart-Vortex), is currently fourth. Two strong interpreters of the category, the Dutch Stan Pex (KR Motorsport/KR-TM racing) and his teammate Danilo Albanese, who made up for some ground after a retirement in one heat, are a bit delayed.

The Brazilian Camara shines in OK.
One of the main protagonists of OK, Andrea Kimi Antonelli (KR Motorsport/KR-Iame) claimed two wins on Saturday, but his run was spoiled by some unlucky moments. His teammate from Brazil Rafael Camara had a better path and secured one win on Saturday and one on Friday plus some other positive results that earned him the provisional lead. The other KR Motorsport driver Brando Badoer also displayed a great shape taking one win and installing himself in the second place of the provisional classification. The third place is occupied by another KR Motorsport driver, the Brit Arvid Lindblad. The other heat-winners on Saturday are the Brit Joseph Turney (Tony Kart Racing Team/Tony Kart-Vortex) and the American Ugo Ugochukwu (Sauber/KR-Iame).

A good duel between Al Dhaheri and Keeble in OKJ.
Quite a few heats – 15 – have been needed to define the OK-Junior classification. The double win also on Saturday and other positive results allowed Rashid Al Dhaheri (Parolin Motorsport/Parolin-TM Racing) to take the lead of the classification. The most victorious driver was the Brit Harley Keeble (Trony Kart Racing Team/Tony Kart-Vortex) who claimed 4 wins on Saturday, the last of which leading Al Dhaheri. The Japanese Kean Nakamura Berta (Forza Racing/Exprit-TM Racing) had a strong weekend so far and won two heats. Two wins were also claimed by the German Maxim Rehm (Ricky Flynn/Kosmic-Vortex), who overall took three wins including the one on Friday. In the classification he is lagging a bit behind though, due to a DNF in the opening heat on Friday. The Russian Dmitry Matveev (KR Motorsport/KR-Iame) and the French Maxens Verbrugge (Ricky Flynn/Kosmic-Vortex) won one heat each.

Lammers leading the pack in MINI.
In MINI, at the end of the 18 heats run so far, René Lammers (Baby Race/Parolin-Iame) is topping the charts thanks to two wins on Saturday and one on Friday, but the final classification of the heats will be drawn on Sunday morning after the three final heats. Emanuele Olivieri (Formula K Serafini/IPK-TM Racing) is currently behind Lammers thanks to several good results and the win scored on Friday, the Swiss Kilian Josseron (Team Driver/KR-Iame) also won one heat. Two heats on Saturday were won by the Asian Tiziano Monza Sauber/KR-Iame), while the Pole Jan Przyrowsky (AV Racing/Parolin-TM Racing), the Dane Dries Van Laugenndonk (BirelArt Racing/BirelArt-TM Racing), the Austrian Niklas Schaufler (Emme Racing/EKS-TM Racing) and the Australian Griffin Peebles (Team Driver/KR-Iame) won one heat each.