The weather was still changeable on Friday, December 11th over Portimão for the beginning of the Qualifying Heats of the Rotax MAX Challenge International Trophy. A few clearings tried to break through the cloud cover despite the frequent presence of light rain, which generated some pretty rainbows, as well as generally limited grip. Spoiler penalties frequently changed the rankings. 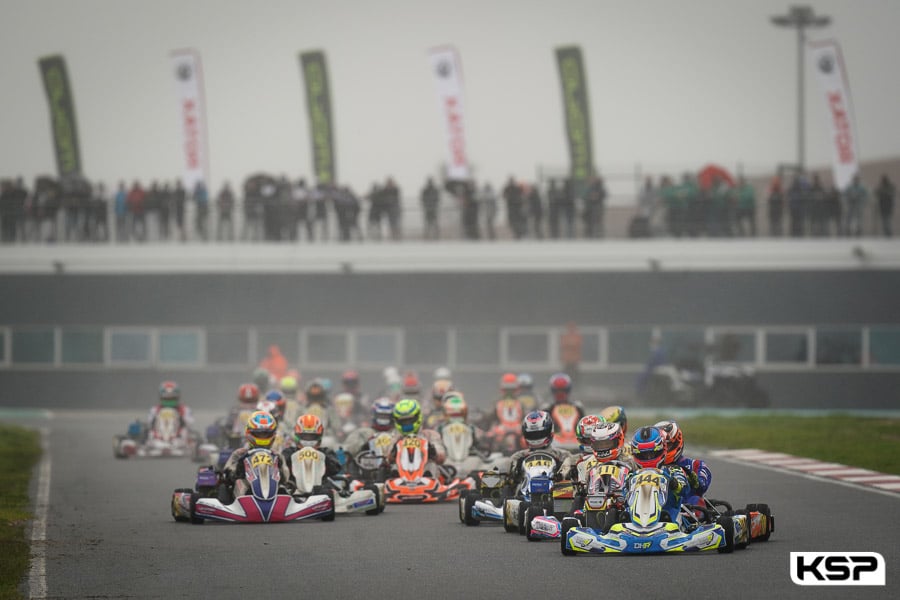 Arthur Roché (FRA – Kosmic – PKS Compétition) made a 14-place comeback to 9th place in the A-B heat, while Yann Bouvier (FRA – Kosmic – KRS) took 17 places to 11th position. These two drivers confirmed during the B-D heat with progressions of 12 and 10 places. Dylan Léger (FRA – Tony Kart – Kart Management) was 5th then 3rd, and Nicolas Picot (FRA – Tony Kart – NPS) was 10th then 8th despite a 5” penalty.

Freddie Spindlow (GBR – Kosmic – KR Sport) was deprived of his victory under the chequered flag in the C-D heat because of a penalty for incorrect grid position before taking 3rd place in the following heat. Téo Blin (FRA – Tony Kart – Kart Management) was victim of a retirement in the C-D heat and made a comeback of 11 places to 5th place in the following heat despite a 5” penalty.

Micro: Feghali continues in the lead
Poleman of the after Qualifying, Christopher Feghali (LBN – KR – DHR) has confirmed his status by winning the two races of the day. The first victory was narrowly won against the growing threat of Juliusz Ociepa (POL – Energy – KRK Racing), whereas Matej Nemec (SVK – KR – LSR Racing) was relegated by nearly 8″ in the second race. Twice 4th, Max Sadurski (NLD – Energy) saw the benefit of his consistency.

Heats and Prefinals on Saturday’s programme in Portimao