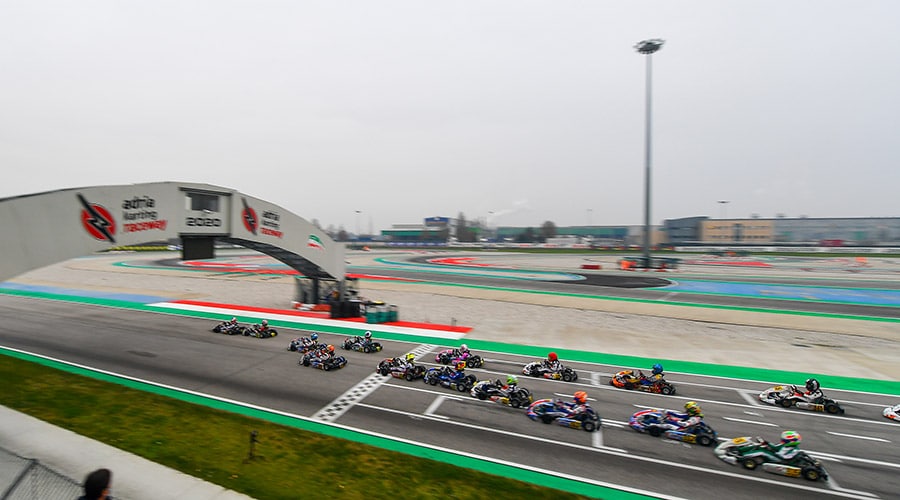 The final stages will begin on Saturday after the closing heats of Round 2 with the Prefinals of Round 1 and Round 2, while the double Finals on Sunday, November 29th will enjoy live streaming coverage from www.wsk.it.

The provisional leaders of Round 1.
The heats valid for Round 1 took place on Thursday and the Dutch Stan Pex (KR Motorsport/KR-TM Racing-Vega) topped the charts in KZ2, the Russian Andrey Zhivnov (Team Komarov/Tony Kart-TM Racing-Bridgestone) in OK, the Brit Arvid Lindblad (KR Motorsport/KR-Iame-Vega) in OK-Junior and the Dutch René Lammers (Baby Race/Parolin-Iame-Vega) in MINI.

The heat-winners of Round 2 of the WSK Open Cup.
The drivers that posted the pole position time on Wednesday, namely the Dutch Stan Pex (KR Motorsport/KR-TM Racing-Vega) in KZ2, the Brit Taylor Barnard (Rosberg Racing Academy/KR-Iame-Bridgestone) again in OK, the Dane Tobias Clausen (Ricky Flinn/Kosmic-Vortex-Vega) in OKJ and the Pole Maciej Gladysz (Parolin Racing Kart/Parolin-TM Racing-Vega) in MINI were the favourite for Round 2.

KZ2. The Dutch driver Stan Pex (KR Motorsport/KR-TM Racing) put in an excellent performance in KZ2 winning the first heat, as did the Swede Viktor Gustafsson (Leclerc by Lennox/BirelART-TM Racing), who won the second. Pex got the lead back in the third and crossed the finish line ahead of a great Leonardo Marseglia (BirelART-TM Racing), while Gustafsson was third. Among the front runners, Pex’s teammate Danilo Albanese (KR Motorsport/KR-Iame) also showed a good pace.
KZ2 provisional classification after heats: 1. Pex; 2. Gustafsson; 3. Albanese; 4. Marseglia; 5. Valtanen; 6. Leuillet; 7. Van Walstijn; 8. Vycheslav.

The program will continue on Saturday, November 28th with the closing heats of Round 2 that will be followed by the Prefinals of Round 1 and Round 2. The much awaited Finals will name the winners of the WSK Open Cup 2020 on Sunday, November 29th.