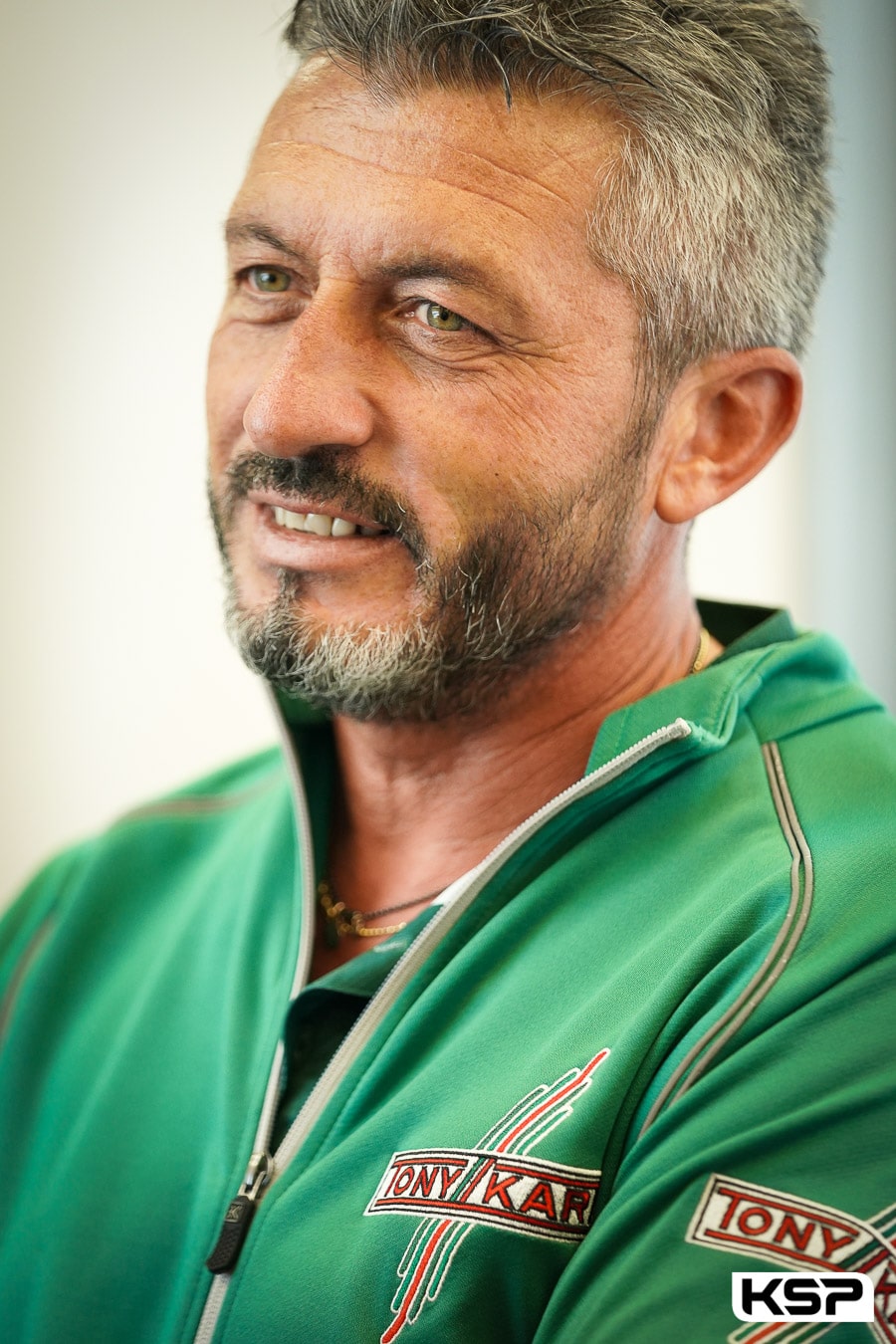 “I’m proud to be a team manager at Tony Kart.”

Giacomo Aliprandi has already spent more than half of his life with the OTK group. The 51-year-old father of one child is one of the key members of the Tony Kart team, where he has become team manager and has had many wonderful moments. Recently, the quiet Italian accompanied his trio of drivers Bradshaw, Turney and Hiltbrand on the podium of the OK World Championship.

How does one become a team manager at Tony Kart?

I am fortunate to have family ties with Roberto Robazzi, President of the OTK Group. In the beginning, I started working as a simple employee at the factory 31 years ago! Then I moved to the racing department as a mechanic for several seasons. I was with Johnny Mislijevic when he became European Champion and World Champion in Formula Super A in 1996. Tony Kart had been chasing this title since its inception, it was also the first for the Vortex engines created only two years earlier. Then I took on the role of team manager.

What is your role?

At the factory, which is based in Italy at Prevalle near Brescia, and during the competitions, I have to make sure that the official team is running smoothly at all levels. The preparation for the trips and the equipment, in collaboration with the team of mechanics, remains an essential job. Within the structure, I am lucky to be helped by colleagues who also have responsibilities, such as Alberto Viglino, Marco Ardigo and Arnaud Kozlinski. Concerning the defence of our drivers, when they are summoned by the sporting stewards, this was my task in the past. Today, it is Arnaud who takes care of it.

How do you manage internal rivalries?

When drivers are chosen to represent the official team, they must first think about the results they are expected to bring to the Tony Kart brand. We regularly discuss the strategy with our drivers, they must be aware of this and be able to use their own judgement. In the past, we have of course sometimes seen misunderstandings on the track. When they are in the heat of the action, the adrenaline they feel pushes them to favour their own desire to win to the detriment of the team. We know that this is part of racing, it is the essence of competition and we have to deal with the situation.

Roberto Robazzi is very charismatic. How do you assess your relationship?

We have been working together for more than 30 years in good conditions, so I can say that our relationship is excellent. Of course, I know that he is very demanding with his employees, but he is also very demanding with himself. He is a tireless worker, both on the track and in the factory. His level of involvement commands respect. For example, he has put a lot of effort into making sure that all the components that make up his karts are manufactured in the factory. Today, when one of his chassis brands wins with a Vortex engine, it’s a 100% OTK victory, except for the paint. This is unique proof of our expertise. So the pressure for results is strong, because he wants the best for his company, as well as victory in every competition. I would add that his passion for karting is incredible!

What has changed the most in karting over the last few decades?

For my part, I have always had the impression of working in a very professional context, so I have adapted to technical developments. Today, what is quite striking is the age of the drivers who race at a high level in international championships. It is not always easy to manage very young drivers, especially as the Tony Kart team is now involved in Mini. Personally, I have great memories with Johnny Mislijevic, Jarno Trulli, Davide Fore or Marco Ardigo, who all raced in our colours when they were over 20 years old. In KZ, there are still some experienced drivers left, but we also have to ensure the support for the very young hopefuls. Like their parents, they sometimes find it hard to understand why they don’t win. Talent and mentality are still the most important things. The OTK group teams provide the same equipment to all the drivers, but not all of them are able to use it 100%, sometimes because of the conditions, sometimes because of their lack of experience.

What are your most vivid memories?

I must have experienced more than 600 races, so it’s hard to choose! Working with talented drivers such as those mentioned above gave me great satisfaction. I enjoyed all our victories. I think I’m lucky to work for a company that is considered the number one in the world of kart racing. The excellent atmosphere in the team is also something I appreciate. I have been working closely with some of the mechanics for a long time. Together with them and others who arrived more recently, we are a close-knit team, in victory as well as in defeat. Today I am proud to be team manager of such a team, I hope to experience many more years with Tony Kart in the future.

Do you have an anecdote to tell us?

Here again, there are many. I have in mind the Junior European Championship we won in 1999 in France at Angerville with the German Reinhard Kofler. He wasn’t very well known internationally and had just come back from his national championship. In the final, he was able to dominate drivers like Lewis Hamilton, Nico Rosberg and Robert Kubica. I also remember this European Grand Prix in Saint Amand in 1996. Johnny Mislijevic had won Race 1 and led Race 2, before losing a wheel due to a broken wheel bearing, which almost never happens. Fortunately, he then won the Belgian Grand Prix and was crowned!