Very exciting finals took place at the International Circuit 7 Laghi in Castelletto di Branduzzo (Pavia), the circuit crowned the 5 winners – in each of the categories KZ2, OK-Junior, International MINI, IAME X30 Junior and X30 Senior – of the 31st Andrea Margutti Trophy on Sunday, November 15th, in the due respect of the Covid sanitary regulations. 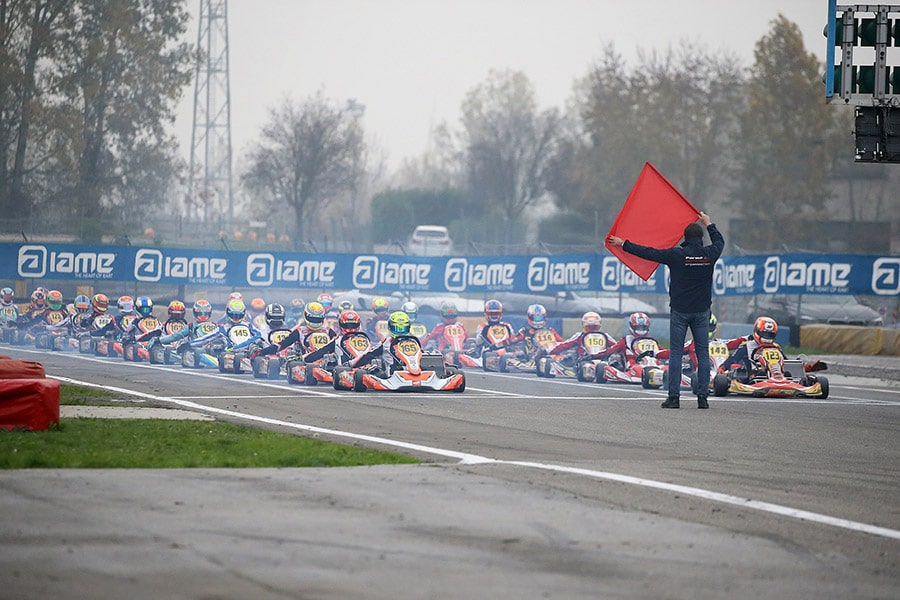 The closing races confirmed the value of the main protagonists of qualifying, as the exciting battles until the end made the event that every year celebrates the memory of the young Andrea Margutti since 1990 even more interesting. In Castelletto di Branduzzo, the prestigious Hall of Fame of the event was enriched by 5 new champions: the top step of the podium of KZ2 went to Senna Van Walstijn (CPB Sport/Sodikart-TM Racing-Vega), that of OK-Junior to Alex Powell (Kidix/KR-Iame-Vega), International MINI’s to René Lammers (Baby Race/Parolin-Iame-Vega), X30 Junior’s to Clement Outran (Team Driver/KR-Iame-Komet) and X30 Senior’s to Edoardo Ludovico Villa (TB Kart/TB Kart-Iame-Komet).

KZ2 went Senna Van Walstijn’s ways.
The victory of Senna Van Valstijn (CPB Sport/Sodikart-TM Racing-Vega) in KZ2 is quite remarkable, as the driver was at his maiden important victory. This was a well deserved result as he took the pole position in qualifying, won the heats and the Prefinal. In the Final, the Dutch Van Valstijn engaged a big battle with some rivals that tried to “steal” his lead: Fabian Federer (Maranello Kart/Maranello-TM Racing) took an early lead but then had to retire due to a technical problem and then Luca Bosco (Manetti Motorsport/BirelART-TM Racing), who inherited the lead from Federer. Van Valstijn regained the lead in the closing two laps and crossed the finish line leading a great Filippo Berto (Emilia Kart/BirelART-TM Racing), who also managed to find his way past Bosco, who ended third. The fourth position went to Alessandro Buran (Renda Motorsport/BirelART-Vortex) after the troubles he hit in qualifying, while the fifth place went to Ukraine’s Vyacheslav Putyatin (CPB Sport/Sodikart-TM Racing).
KZ2 Final Classification: 1. Van Valstijn; 2. Berto; 3. Bosco; 4. Buran; 5. Putyatin; 6. Pollini; 7. Giannoni; 8. Forè; 9. Ebner; 10. Dalè.

Alex Powell dominated OK-Junior.
OK-Junior was dominated by the rhythm put in by the Jamaican Alex Powell (Kidix/KR-Iame-Vega), who took the lead of the Final and kept it for all the 18 laps, building a good margin on his direct rivals. Powell has been one of the main protagonists of the whole weekend, starting from the second place in qualifying that he kept after heats, to the victory in Prefinal and and Final with more than 2s of margin on the Chinese Yuanpu Cui (KR Motorsport/KR-Iame) and 6 seconds on Giovanni Trentin (Parolin Racing Kart/Parolin-TM), who in turn climbed two places up from the result of Prefinal. His teammate Rashid Al Dhaheri lost two places and crossed the finish line in P4, leading Nicola Lacorte (Team Driver/KR-Iame), who has also been among the quickest of the weekend.
OK-Junior Final Classification: 1. Powell; 2. Cui; 3. Trentin; 4. Al Dhaheri; 5. Lacorte; 6. Luescher; 7. Kinnmark; 8. Desiderio; 9. Cesaretti; Deligny.

Photo-finish win to René Lammers in MINI.
A lot of protagonists came to the fore in International MINI, the category that once again confirmed the competitiveness of these young “gladiators”. The Russian Gerasim Skulanov (Formula K/IPK-TM Racing-Vega) led the Thai Enzo Tarnvanichkul (Energy Corse/Energy-TM Racing) in qualifying, while in the heats Skulanov was again on top, this time around followed by René Lammers (Baby Race/Parolin-Iame) who made up for the lost ground and Tarnvanichkul, while the latter won the Prefinal from Skulanov to Lammers. After a few position exchanges on top, Lammers had the upper hand in the Final, as the previous leader Skunalov lost not only the race, but also the second and third place. At the sprint to the line, the second place went in fact to the Finn Kimi Tani (LA Motorsport/Intrepid-TM Racing), while the third to the Pole Maciej Gladysz (Parolin Racing/Parolin-TM Racing). Skulanov was fourth and Tarnvanichkul fifth. The first of the Italians was Emanuele Olivieri (Formula K Serafini/IPK-TM Racing), who recovered 11 positions.
International MINI classification: 1. Lammers; 2. Tani; 3. Gladysz; 4. Skulanov; 5. Tarnvanichkul; 6. Przyrowski; 7. Orjuela; 8. MacLaughlin; 9. Van Langendonck; 10. Olivieri.

Edoardo Ludovico Villa takes another win in X30 Senior.
Great duels took place in IAME X30 Senior, as an excellent Edoardo Ludovico Villa (TB Kart/TB Kart-Iame) secured the second win in a row of the Andrea Margutti Trophy. The Italian has always been among the quickest of the weekend with a lot of other protagonists. Danny Carenini (Autoeuropeo/Tony Kart-Iame) had the upper hand in the heats, while Villa was relegated to P9 by a penalty. The Prefinal gave Villa the chance climb all the way up and take the win from Alessandro Cenedese of Team Driver (KR-Iame) to Carenini. The start of the Final put Carenini out the contention, as he lost ten places, while Villa took the lead of the race and kept it all the way to the flag. Valentino Baracco was second and Brando Pozzi (Top Kart-Iame) third, after shining with the pole position in qualifying. Carenini was fourth at the flag but then he was pushed down to P7 by a penalty. The fourth place went therefore to Alessandro Cenedese (Team Driver/KR-Iame), who got it off Gianluigi Palego (M2 Racing/Tony Kart-Iame) as the latter was handed a 3s time penalty.
X30 Senior classification: 1. Villa; 2. Baracco; 3. Pozzi; 4. Cenedese; 5. Palego; 6. Pulito; 7. Carenini; 8. Ferrari; 9. Ingolfo; 10. Di Filippo.

Complete results are available at www.trofeomargutti.com.