Highly spectacular qualifying heats as always at the Andrea Margutti Trophy organized by Parma Motorsport have taken place at the Circuit 7 Laghi in Castelletto di Branduzzo (Pavia). Qualifying heats have named the main protagonists that will face the final stages with Prefinals starting on Sunday at 10:50 and Finals at 13:30. 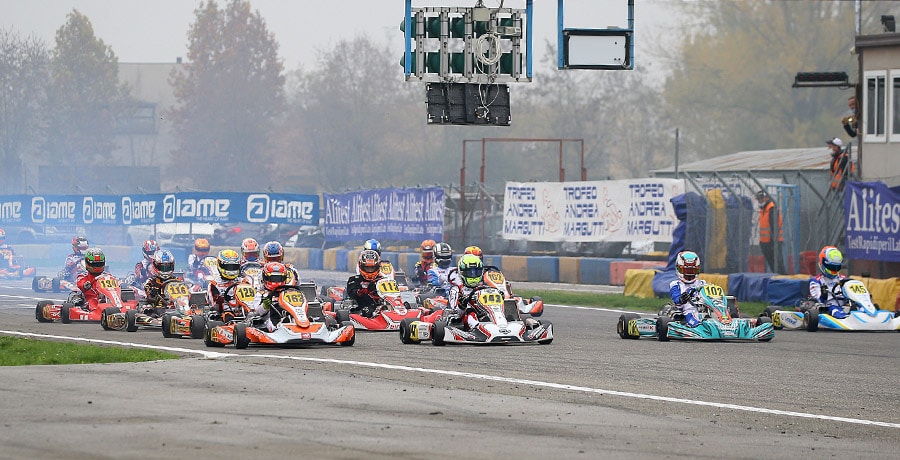 Van Walstijn and Federer to the fore in KZ2.
A jumped start by a fraction of a second cost the victory in KZ2 to Giacomo Pollini (NGM Motorsport/Formula K-TM Racing), who was eventually handed a 5s time penalty that relegated him to P5. The victory went therefore to Senna Van Walstijn (CPB Sport/Sodikart-TM Racing-Vega), who posted the pole position time, and proceeded Fabian Federer on Maranello Kart and Vyachesiav Putyatin (CPB Sport/Sodikart-TM Racing). The fourth place went to Moritz Ebner (TecTav/BirelART-TM Racing) and the fifth to Luca Bosco (Manetti Motorsport/BirelART-TM Racing). The top 3 was repeated in the second heat, as Van Valstijn led again Federer and Putyatin, while Giacomo Pollini recovered up to P4 leading Luca Bosco and Moritz Ebner. Alessandro Buran (Renda Motorsport/BirelART-Vortex) has been quite unlucky as he was recovering from a technical problem in the first heat, but spun in the second one.
KZ2 classification after the heats: 1. Van Walstijn; 2. Federer; 3. Putyatin; 4. Ebner; 5. Bosco; 6. Pollini; 7. Lundberg; 8. Dalè; 9. Balbo; 10. Lanzeni.

In OK-Junior Flavio Olivieri paid the fee of a wrong start.
In OK-Junior Flavio Olivieri (Praga Racing Team/Praga-Vortex-Vega) has been the quickest in qualifying and confirmed his momentum in the first heat where he led Giovanni Trentin (Parolin Racing/Parolin-TM Racing) and Rashid Al Dhaheri (Parolin Racing/Parolin-TM Racing) at the flag. In the second heat he crossed the finish line behind Yuanpu Cui (KR Motorsport/KR-Iame) and Alex Powell (Kidix/KR-Iame) in P3, but Olivieri was later on handed a 10s penalty for a not correct start and therefore he was relegated to P16. The third place was therefore inherited by Al Dhaheri, Trentin was fifth and Nicola Lacorte (Team Driver/KR-Iame) sixth.
OK-Junior classification after the heats: 1. Cui; 2. Powell; 3. Trentin; 4. Al Dhaheri; 5. Lacorte; 6. Olivieri Flavio; 7. Malek; 8. Kinnmark; 9. Roy; 10. Desiderio.

Ratel and Cirelli on top in the X30 Junior heats.
The pole position of IAME X30 Junior was set by Andrea Barbieri (TB Kart/TB Kart-Iame-Komet), but the French Andy Ratel (Kbk Competition/Exprit-Iame) bounced back winning the first heat and Riccardo Leone Cirelli (Autoeuropeo/Tony Kart-Iame) did the same taking the victory in the second one. Barbieri came second in the first heat, but then lost some positions at the end of the second one. Matteo De Palo (Mixauto Motorsport/Tony Kart-Iame) displayed a good crescendo of results. The new Italian Champion Manuel Scognamiglio (Team Gamoto/Tony Kart-Iame) had a troubled qualifying instead, while Davide Larini (Newman Motorsport/Tony Kart-Iame) showed a good race pace.
X30 Junior classification after the heats: 1. Ratel; 2. Cirelli; 3. Barbieri; 4. De Palo; 5. Costa; 6. Leopardi; 7. Galbiati: 8. Larini; 9. Bondarev; 10. Outran.

Great duels in X30 Senior!
The IAME X30 Senior has been highly spectacular thanks to the duels between Edoardo Ludovico Villa (TB Kart/TB Kart-Iame), who won one heat but was penalized in the second one, and Danny Carenini (Autoeuropeo/Tony Kart-Iame) who also claimed one win. The duel between the two has been very exciting but a lot of other drivers are ready to slide in the fight as Daniele Vezzelli (LGK Racing/EKS-Iame-Komet), the poleman Brando Pozzi (Top Kart-Iame-Komet) who also secured one win in the heats and Lorenzo Ferrari (Autoeuropeo/Tony Kart-Iame), who unfortunately had to retire from one heat. Samuele Di Filippo (Autoeuropeo/Tony Kart-Iame), Alessandro Cenedese (Team Driver/KR-Iame) and Francesco Pulito (M2 Racing/Tony Kart-Iame) were also among the quickest.
X30 Senior classification after the heats: 1. Carenini; 2. Pozzi; 3. Di Filippo; 4. Cenedese; 5. Villa; 6. Pulito; 7. Gnecchi; 8. Palego; 9. Taccola; 10. Mira.