Qualifying practice on Friday, November 13th kicked off the 31st Andrea Margutti Trophy, the event that reached its 31st edition in the memory of the young Andrea Margutti and that is underway at the Circuit 7 Laghi in Castelletto di Branduzzo (Pavia) with the organization by Parma Motorsport. 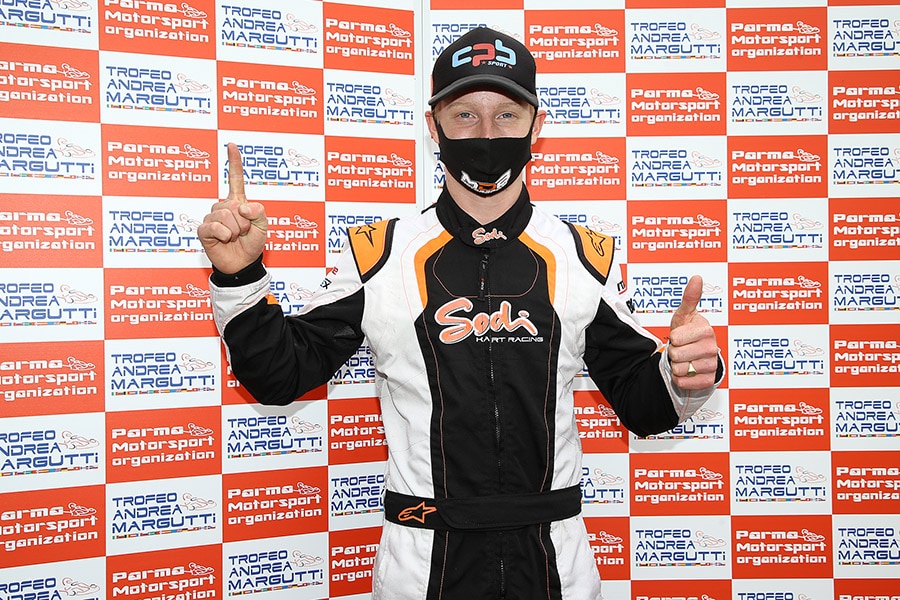 In KZ2 Senna Van Valstijn leads Giacomo Pollini by 0.008s.
This edition announced to be once again very hard-fought despite the absence of some protagonists due to the peculiar period following the Covid-19 sanitary emergency. Qualifying on track defined the initial protagonists and underdogs in the various categories, starting from KZ2 where the Dutch Senna Van Valstijn (CPB Sport/Sodikart-TM Racing-Vega) secured the pole position in 46.613s pipping 2016 Andrea Margutti Trophy’s winner Giacomo Pollini (NGM Motorsport/Formula K-TM Racing) by just 0.008s. The third position went to another winner of the Margutti Trophy, Fabian Federer, who won the race back in 2012 and that was 0.035s shy of the lead on Maranello Kart. The fourth time, just at 0.040s from the top, went to Moritz Ebner (TecTav/BirelART-TM Racing). Luca Bosco (Manetti Motorsport/BirelART-TM Racing) and the great Natalia Valentina Balbo (NGM Motorsport/Formula K-TM Racing) qualified just at one tenth to the top. Andrea Dalè (Nuova 3M/CRG-TM Racing) who won the Trophy back in 2005 was also among the quickest as 2015 winner and multiple-champion Davide Forè (Intrepid Driver Program/Intrepid-TM Racing), who qualified 11th.

Sparkles in MINI among Gerasim Skulanov, Enzo Tarnvanichkul and Jan Przyrowski.
MINI Group 3 International has been very exciting and the Pole Jan Przyrowski (AV Racing/Parolin-TM Racing-Vega) had the upper hand in Session 1 posting the fastest laptime in 53.572s, leading the American Matias Orjuela Garcia (Parolin Racing/Parolin-TM Racing) by 0.055s and Slovenia’s Mark Kastelic (Team Driver/KR-Iame) by 0.066s. The young Thai Enzo Tarnvanichkul (Energy Corse/Energy-TM Racing) was even faster in the second Session and posted his best time in 53.447s. He was followed by the Austrian Nando Weixelbaumer (Baby Race/Parolin-Iame) at 0.084s and by the Czech teammate Jindrich Pesl at 0.197s. The quickest of all was the poleman of Session 3 though. The Russian Gerasim Skulanov (Formula K Serafini/IPK-TM Racing) went quickest in 53.221s and was followed by the Pole Maciej Gladysz (Parolin Racing/Parolin-TM Racing) at just 0.004s as teammate Emanuele Olivieri (Formula K Serafini) was 0.025s shy of him.

Tight pole position for Andrea Barbieri in X30 Junior.
The gaps among the protagonists of IAME X30 Junior were minimal too. The best time here was posted by Andrea Barbieri (TB Kart/TB Kart-Iame-Komet), who managed to lead the pack in the closing stages with a best loop completed in 50.483s, that was 0.012s clear of Matteo Luvisi (Newman Motorsport/Tony Kart-Iame) and 0.056s of Riccardo Leone Cirelli (Autoeuropeo/Tony Kart-Iame). Daniele D’Urso (Racing Factory/BirelART-Iame), Giosuè Luigi Galbiati (TB Kart/TB Kart-Iame) and the French Andy Ratel (Kbk Competition/Exprit-Iame) were just over a tenth shy of the pole. The new Italian Champion Manuel Scognamiglio (Team Gamoto/Tony Kart-Iame) had some problems and ended 0.6s from the top in 22nd place.

Brando Pozzi and Lorenzo Ferrari lead X30 Senior.
In IAME X30 Senior the pole position in Session 1 went to Brando Pozzi (Top Kart-Iame-Komet) who completed his best lap in 48.934s. He had been fighting with last year’s winner Edoardo Ludovico Villa (TB Kart/TB Kart-Iame) who was 0.071s shy of him and with the new Italian Champion Danny Carenini (Autoeuropeo/Tony Kart-Iame) who had a bit over a tenth of gap to the top. Team Autoeuropeo completed a one-two-three in the second Session with Lorenzo Ferrari – who has been competing in motorsport for two years but is back to karting for the occasion. He completed the best loop after 49.644s and led his teammate from France Arnaud Malizia by 0.08s, and the other teammate Samuele Di Filippo by 0.036s.

Qualifying heats will follow on Saturday 14th, while the final stages will take place on Sunday November 15th. Live Timing will be available from www.trofeomargutti.com.

Results and info at: www.trofeomargutti.com.