The FIA Girls on Track-Rising Stars programme, an initiative set up by the FIA Women in Motorsport Commission, is now in its decisive stage and the Ferrari Driver Academy (FDA) will be playing its part. The aim is to promote women in motorsport and support talented young women between the ages of 12 and 16 as they seek to embark on a career as a professional racing driver. 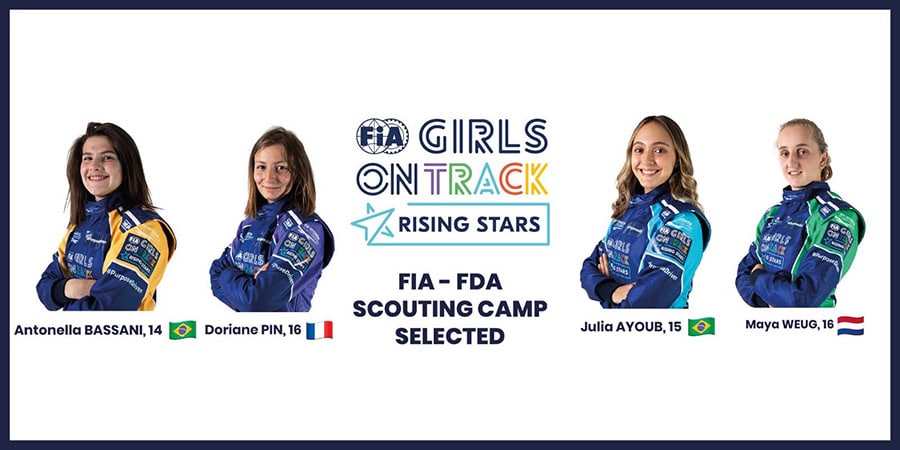 The drivers selected for the fourth stage of the Girls on Track – Rising Stars project then participated in a Formula 4 training camp where experts assessed their progression to this entry-level category. In attendance was FDA driver Arthur Leclerc, currently second in the European Formula Regional championship. A further selection was made and the final four is at Maranello since today. In strictly alphabetical order they are: Brazilians Julia Ayoub, 16 years old, and Antonella Bassani, 14 years old; from France, Doriane Pin, 16 years old; Maya Weug, also 16, born in Spain with a Belgian mother and a Dutch father.

Busy schedule. The young women will spend four busy days in Maranello, getting a clear idea of what it means to be an FDA student. The programme includes physical aptitude tests, communications skills, attitudinal tests and simulator driving sessions as well as a series of lessons on the sporting regulations and behaviour on track. On Thursday and Friday they will be at the Fiorano track, driving a Formula 4 car fitted with the same Pirelli tyres as used in the Italian championship.

The selection. The young women will leave the Ferrari training camp on Friday afternoon when the experts will pour over all the data gathered from the track and from the activities of the first three days. They will then pick one candidate deemed to be the most deserving of becoming the first female student to join the Ferrari Driver Academy.

FIA President Jean Todt said: “I would like to thank all the partners of the FIA Girls on Track – Rising Stars programme for their commitment and to congratulate the four selected drivers. This is a pivotal time in their young careers. I wish them much success during this final stage of the programme and have no doubt they will be even more motivated now they are immersed in the Ferrari family. As you know, promoting gender equality and diversity in motor sport is one of the priorities of the FIA and its #PurposeDriven movement and I salute this achievement.”

Scuderia Ferrari Team Principal and Managing Director, Mattia Binotto, said: “We are pleased and proud that the first edition of the FIA Girls on Track-Rising Stars programme, devised in conjunction with the Ferrari Driver Academy now comes to a conclusion at the Fiorano track, a stone’s throw from our headquarters. Scuderia Ferrari was keen to get involved in this partnership with the FIA, because it’s a great opportunity to establish a well structured motor sport training route for young women who want to race, while also promoting the fact that there are no gender barriers in motor racing. This has been a very important year for the FDA, which has expanded its scouting programme worldwide, culminating in the world finals held at Fiorano two weeks ago. The completion of the FIA Girls on Track-Rising Stars programme is another important step for the Academy which has already given and continues to give Ferrari so much satisfaction.”

F4 Academy: Return to Paul Ricard for the rest of the competition