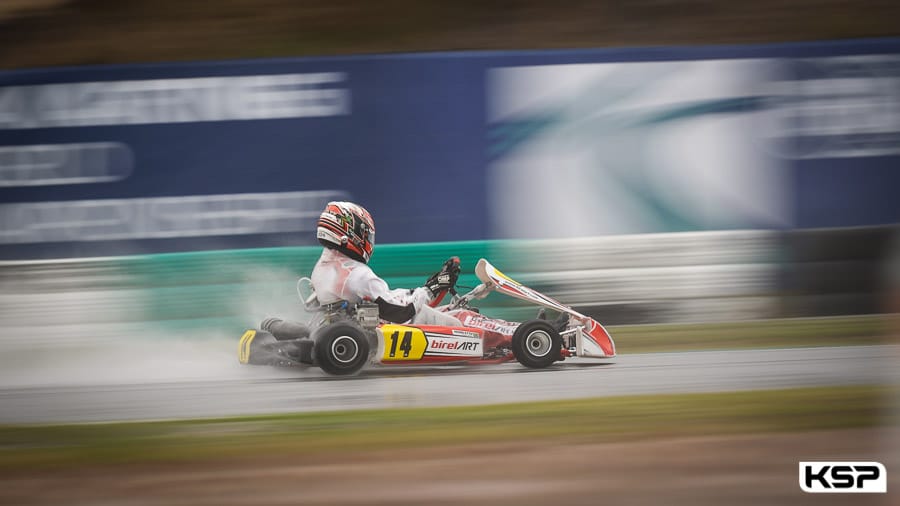 Andrea Kimi Antonelli (KR/Iame) started the second session with a bang after the rain had stopped. He was the first one to cross the 1’12” mark in front of Ruben Moya Lopez (CRG/Iame) and Alexander Hartvig (Tony Kart/TM). Laurens Van Hoepen (Birel ART/TM) was then back in 2nd position. Despite his efforts in the last two laps, Antonelli stayed on his time of 1’11”850, two tenths ahead of Hartvig and Van Hoepen. Matias Salonen (KR/Iame) was in 4th position in front of Moya Lopez. Florian Rousseau-Ricci (KR/Iame) finished 12th behind Enzo Trulli (Birel ART/TM).

The track, which had been forecasted to be dry for the third session, was still very slippery. The drivers waited a little longer than usual to start. Marcus Amand (KR/Iame) went off the track because of another driver after only one lap… Lorenzo Travisanutto (Parolin/TM) was fighting for the lead against Callum Bradshaw (Tony Kart/Vortex) and Danny Keirle (KR/Iame). Bradshaw finally finished in the lead – 1’12”149 – nearly 2 tenths ahead of Travisanutto. Keirle was 3rd a tenth further back, Juho Valtanen (KR/Iame) 4th and Kajus Siksnelis (Exprit/Vortex) 5th, followed by Nikita Bedrin (Tony Kart/Vortex). Hugo Besson (KR/Iame) set a good 8th time.

Pedro Hiltbrand (Tony Kart/Vortex) was immediately at the front of Session 4 on a dry track. Lorenzo Patrese (KR/Iame) then took over the lead, but the times weren’t very fast with two minutes to go. The progression resumed in the last minute with the lap of 1’12”520 at the last moment by Hiltbrand, 5 hundredths ahead of Taylor Barbard (KR/Iame). Patrese finished 3rd by three tenths, followed by Casper Jansson (Tony Kart/Vortex) and Josep Marti (KR/Iame). Rafael Camara (Exprit/TM) couldn’t do better than 8th, whereas Lola Lovinfosse (Tony Kart/Vortex) was 13th.