At the end of the second FIA Girls on Track – Rising Stars Training Camp, four drivers have secured coveted places for the final training course at the Ferrari Driver Academy in Maranello, Italy. The FIA Women in Motorsport Commission’s innovative talent detection programme has seen 20 aspiring female racers from around the world vie for the honour of reaching this point in their young careers. Now, after weeks of training and assessment, just four will fight for one place and the ultimate goal of potentially securing a one-year contract as a member of the Academy. 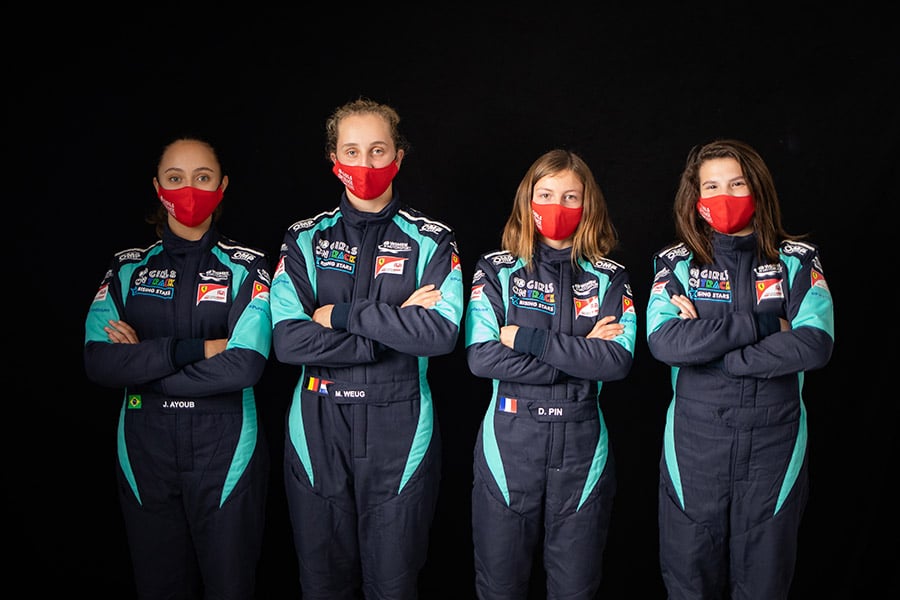 “This has been another incredibly tough assessment for the drivers, some of whom experienced Formula 4 for the first time; that was a steep learning curve for them,” commented Michèle Mouton, President of the FIA Women in Motorsport Commission and a keen observer. “We have seen a very high level of determination and focus, and the results have been full of surprises from outsiders to more experienced F4 drivers who all performed and progressed quickly.

“I would like to congratulate all the drivers for reaching this point. I know they will take away a great deal of knowledge and advice to help them develop their careers further. For our selected four drivers heading to the Ferrari Driver Academy training course, this is the final step towards a potentially life-changing opportunity in their young racing careers.”

This week’s second Training Camp for eight selected drivers opened up the opportunity to test Formula 4 machinery and, for some, it was their first taste of this entry-level motor sport category after years in karts. Showing speed on the track has, from the outset, been just one element of the FIA Girls on Tracking – Rising Stars assessment and the drivers have needed to demonstrate their potential to adapt, progress and develop both on and off the track throughout the entire process. The Training Camps were also designed to highlight many of the elements vital to becoming a complete racing driver, including physiological welfare, media interaction, personal presentation, safety and the value of team/driver relationships and tyre management.

Today was largely about track time and a full race simulation around the 3.8 kilometre Circuit Paul Ricard. After two 10-lap qualifying sessions – where drivers used both new and scrubbed tyres – the all-important six-lap Super Pole intensified the battle for pole position, as well as the honour of winning the Pirelli Award for the fastest Super Pole lap. Dorian Pin from France claimed the accolade and was presented with a Pirelli wind tunnel tyre, an award iconic in Formula 1 that commemorates securing pole position at each Grand Prix.

After the 16-lap race and individual interviews with the jury, the eight drivers embarked on their final educational webinar covering safety and medical issues while the pivotal deliberations took place. This FIA Driver Training programme was launched in 2016 and has been implemented within the FIA’s single-seater championships, as well as at the Ferrari Driver Academy, as an important initiative designed to instil important lessons in conduct, safety and human performance. FIA Safety Engineer, Nuria Encinas Redondo, provided a valuable insight into FIA-approved safety equipment, including helmet and driver clothing standards, and their importance in mitigating injury in the event of an accident, while a presentation by FIA Medical Co-ordinator Prisca Mauriello then looked at anti-doping and anti-alcohol awareness, both fundamental to the FIA Race True campaign.

As a member of the jury throughout the process, accomplished race-winning driver Cathy Muller, who is Manager of the FIA Women in Motorsport Commission’s Detection Cell, concluded: “The level has been high and it has been extremely encouraging to see how much the drivers have progressed since the shoot-out. They have shown real commitment to advancing their careers both on and off the track and it has been a pleasure to witness their on-going development.”

At the end of another mentally and physically demanding and exhilarating few days, the four selected drivers are now scheduled to head to the Ferrari Driver Academy for five days of assessment and Formula 4 track time on the Fiorano circuit (9-13 November). At the end of this training course, just one of the drivers could be awarded a one-year contract to join the Ferrari Driver Academy for an FIA Formula 4 season in 2021.