Portimao: Lindblad takes the lead in Junior Champions of the Future heats 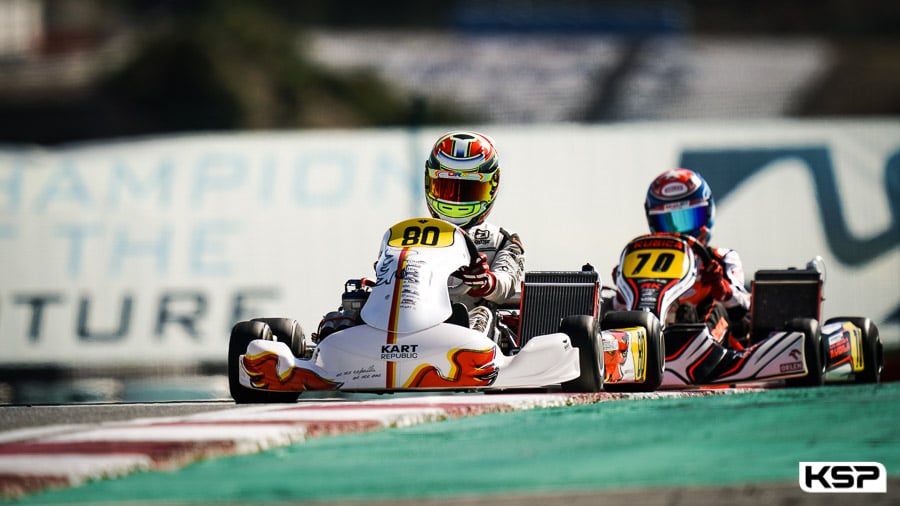 Arvid Lindblad (KR/Iame) took the advantage over poleman Brando Badoer (KR/Iame) at the end of the Qualifying Heats of Champions of the Future in Portimao: with four victories for the Briton against three for the Italian, the dice were thrown. Ugo Ugochkwu (KR/Iame) didn’t disappoint by finishing 3rd with three wins to his credit. Tymoteusz Kucharczyk (RK/TM) made good progress, finishing with a victory, to move up from 8th to 4th position in front of Christian Ho (KR/Iame). Evan Giltaire (Sodi/TM) was brilliant in this difficult exercise, finishing in 6th position. Freddie Slater (Kosmic/Vortex) moved up from 21st to 9th place, while Martinius Stenshorne (Birel ART/TM) was performing better and better after an average first heat. Arthur Rogeon (Exprit/Vortex) moved up from 26th to 17th position. Tuukaa Taponen (Tony Kart/Vortex) and Dion Gowda (Kosmic/Vortex) both dropped back in the top 20 after one retirement each. Macéo Capietto (Kosmic/Vortex) lost out significantly after a contact in the last heat and was 27th.

Connor Zilisch (Tony Kart/Vortex) has made some strong recoveries, but he will have to go through the Repechage on Sunday morning, together with the brilliant Ariel Elkin (KR/Iame) and some French drivers who are far from being in a position to qualify. Augustin Bernier (KR/Iame) was 50th after two difficult heats, Guillaume Bouzar (Parolin/TM) 58th, Antonio Leite (KR/Iame) 64th, Arthur Poulain (Sodi/Iame) 65th, Jolan Raccamier (DR/Modena) 68th, Maxens Verbrugge (KR/Iame) 70th ahead of Maxwell Dodds (Parolin/TM), Alessandro Giusti (KR/Iame) 76th, Romain Andriolo (Sodi/TM) 79th and Jules Roussel (Sodi/TM) 86th.

Champions of the Future: Antonelli continues at the front of the OK heats