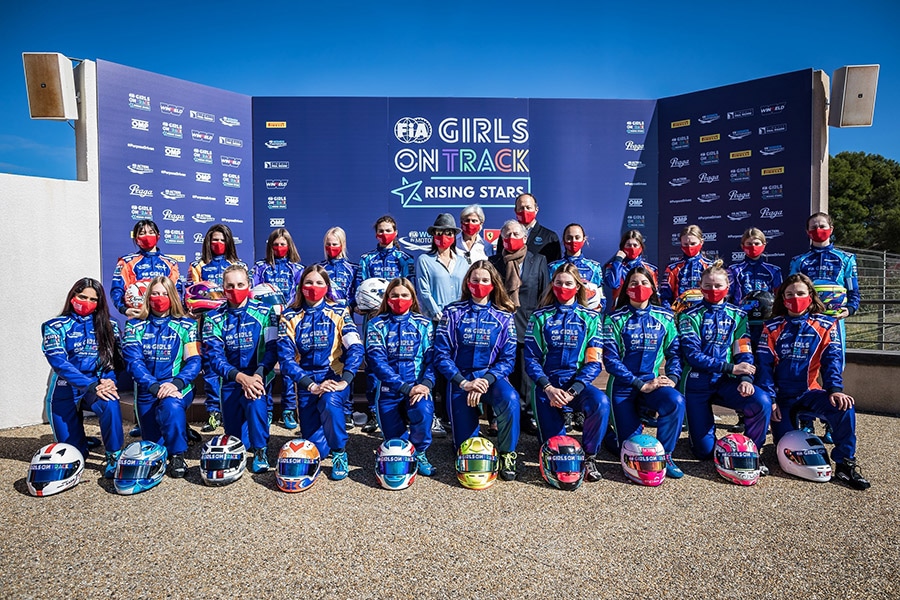 At the end of the final day of the FIA Girls on Track – Rising Stars shoot-out, 12 of the 20 participants have been selected to progress to the three-day Training Camp hosted at Circuit Paul Ricard 14-16 October. Jean Todt and Michèle Mouton, in their capacities as FIA President and President of the FIA Women in Motorsport Commission respectively, were keen observers of the second stage of this talent detection programme, which supports and develops young female racers in their motor sport careers while creating greater diversity within the sport.

Jean Todt said:
“It has been pleasing to attend the FIA Girls on Track – Rising Stars event at Paul Ricard today and be given a glimpse of motor sport’s future. The fact that we had young girls attending from five continents underlines the global appeal of this unique talent search concept. In speaking to the girls today, and watching them complete their many tasks, the joy and passion they have for motor sport shines through. I am proud that through initiatives such as FIA Girls on Track – Rising Stars, the FIA is embracing diversity in motor sport, one of the objectives of our #PurposeDriven movement. I would also like to thank all of our partners Ferrari Driver Academy, Winfield Racing School, Circuit Paul Ricard, Pirelli, Praga Karts, OMP and Motorsport.com for their efforts in making the event such a success. I congratulate all the girls taking part in this week’s event and wish them all the best in their future careers.”

The participants selected to undergo the three-day Training Camp are:

Today was another intensive programme for the 12-16 year old girls from five continents who not only put their skills to the test on the track, but were challenged in workshops designed to evaluate and help improve their physical and mental wellbeing for the demanding world of motor sport.

In action, the girls were back out on the 1.0km circuit in two groups, providing them with an opportunity to demonstrate what they had learned from the Winfield Racing School coaches the previous day. Taking part in a full race simulation, they competed in warm-up, qualifying and a super pole shoot-out before concluding with 15 lap races in their Pirelli-shod Praga karts.

“It really has been a fantastic opportunity, an experience I am sure the girls will never forget, and I believe they will all take something valuable away with them as they continue to progress in their careers,” commented Michèle Mouton. “There has been strong competition but also great camaraderie among the girls, and they should all be very proud to have reached this stage. For our selected 12 girls, the next three days will inevitably become more intense as the prospect of being selected to attend the Ferrari Driver Academy gets ever closer.”

The three-day Training Camp starts tomorrow (14 October), and will focus on driving skills, in-depth analysis of performance and progression, as well as further workshops run by 321 Perform. On Friday (16 October), up to eight drivers will then be selected to move on to the Formula 4 focussed training camp at Circuit Paul Ricard from 2-4 November.

Imagery from the second day of the FIA Girls on Track – Rising Stars can be downloaded here.

Eight racers on the road to FIA Girls on Track stardom

Find out the impact of Covid-19 on the nervous system