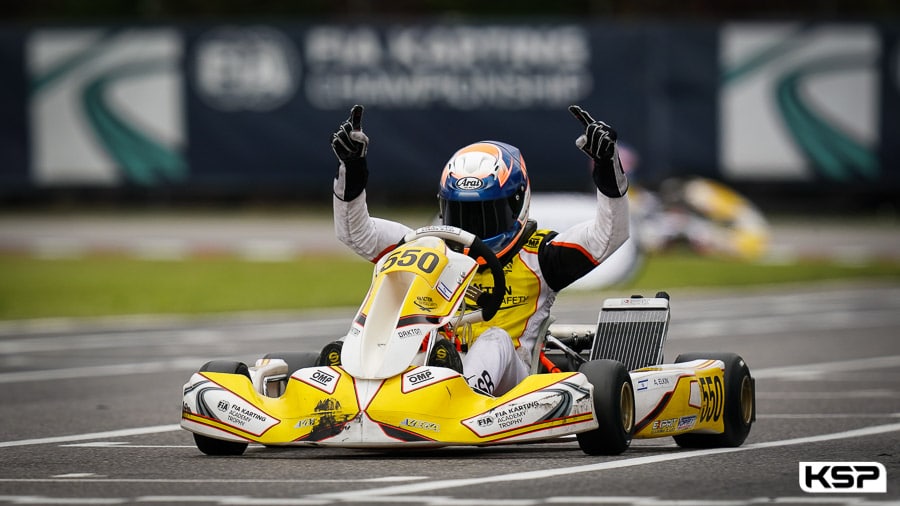 The last Final of the season of the FIA Karting Academy Trophy started under the clouds of Lonato with Aleksander Gubenko (RUS) and Connor Zilisch (USA) on the front row in front of Matteo De Palo (ITA) and Ivan Domingues (POR). Gubenko had a very good start whereas Zilisch crashed with Macéo Capietto (FRA). Theo Micouris (GBR) was 3rd behind De Palo. Zilisch retired, Capietto was 24th, but he also dropped out a little bit later, losing sight of his 2nd place in the Trophy. Ariel Elkin (ISR) was back in 4th position, whereas De Palo took the lead, followed by Micouris who passed Gubenko. Alex Powell (JAM) was 5th in the wake of Elkin, gaining seven places each. De Palo had taken a small advantage at the front, leaving the chasers to battle for 2nd place. Gubenko attacked Micouris, who lost some ground and Elkin found himself in 3rd place. The Israeli then took 2nd place, leaving Gubenko to resist Micouris, joined by Jonathan Waywadt (DNK) and Powell. Elkin then approached the leader De Palo and attacked him with three laps to go. Weywadt retired from the race after contact. Elkin held on until the finish line and won the race against De Palo. Gubenko finished 3rd in front of Powell and Rafael Mondonese (PER). Zilisch won the Trophy despite everything and Capietto took 2nd place at the last minute.