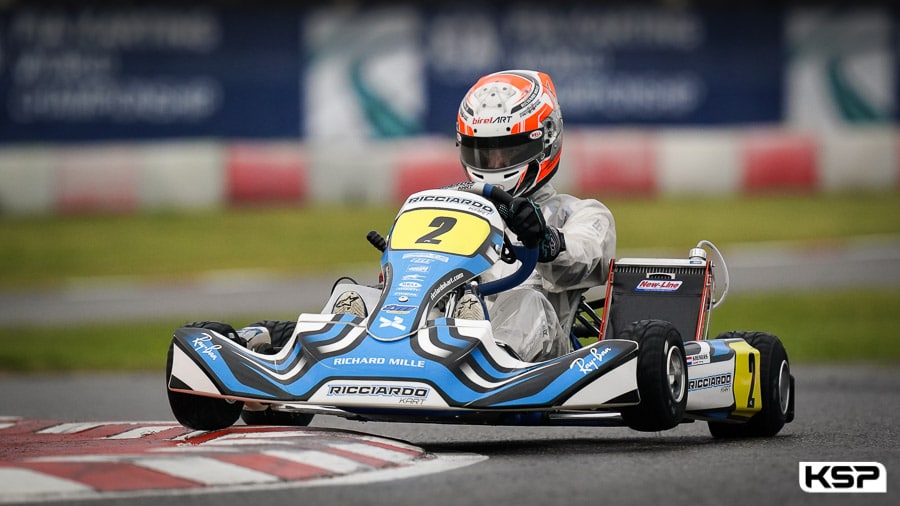 As in KZ2, it was the reigning European Champion who also achieved pole position in the KZ category. At the end of the session, Marijn Kremers (Birel ART / TM Racing) was the fastest of the two groups, the second and last, ahead of Stan Pex (KR / TM Racing). With his Ricciardo-coloured kart, the Dutchman couldn’t have dreamed of a better way to start this competition, as he took the risk to come and defend his world title, whereas he could also have entered the F4 race at the Paul Ricard the same week-end.

On a wet track, there was a surprise from Luca Corberi (Tony Kart / Vortex), 1st in his group and 2nd overall. Although the Italian knows the track by heart, he wasn’t able to test as much as he would have liked and wasn’t among the fastest in the dry. All in all, the Frenchmen performed well overall, with Jérémy Iglesias (Formula K / TM Racing) an excellent 4th, Emilien Denner (Tony Kart / Vortex) 8th with his new team, Adrien Renaudin (Sodi / TM Racing) 12th and even Yohan Soguel (Oberon / IAME) 18th in this very tough context.

Experience also played an important role, as we have Dutchman Bas Lammers (Sodi / TM Racing) in 5th position ahead of his compatriot Jorrit Pex (KR / TM Racing) and the Finn Simo Puhakka (Tony Kart / Vortex). It will be more difficult for Alessandro Irlando (Birel ART / TM Racing), only 24th.

Back after his two-month break to recover from a problem with his ribs, Spaniard Pedro Hiltbrand (Tony Kart / Vortex) is in 11th position behind the two Italians Fabian Federer (Maranello / TM Racing) and Matteo Vigano (Birel ART / TM Racing).