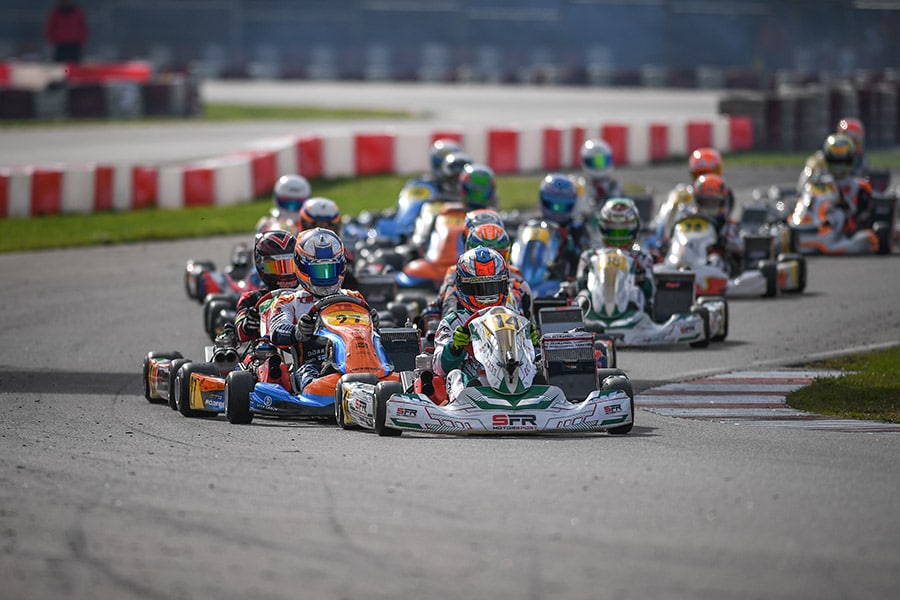 The German Kart Championship travelled to the Prokart Raceland in Wackersdorf for its third event of the season. For the first time this year, the weather was a deciding factor. Rain caused shifts among the different championships. Kris Haanen already won the German Junior Kart Championship. In the other classes, everything is still possible before the finale.

107 drivers competed at the third event of the German Kart Championship in Upper Palatine. After the two events in Kerpen, a new track now awaited the participants in Wackersdorf. This time, the weather was a deciding factor, especially on Saturday. Heavy rain and cold temperatures caused a shift in the power balance. On Sunday there were dry conditions again though and the numerous viewers of the live-stream got to see thrilling races. This time the team of the ACV Automobil-Club Verkehr e.V. ensured that everything ran smoothly.

Juho Valtanen, Ben Dörr (DKM), Kris Haanen (DJKM), Jorrit Pex, Stan Pex (DSKM), Tim Tröger (DSKC) as well as Xen Te Ruwe (DEKM) won the ranked races and belong to the big title favorites before the season final in Oschersleben from October 16th – 18th. While Kris Haanen already celebrated winning the DJKM title in Wackersdorf, the remaining decisions of the highest German kart racing series are going to be made at the season final in the Motorsport Arena Oschersleben. 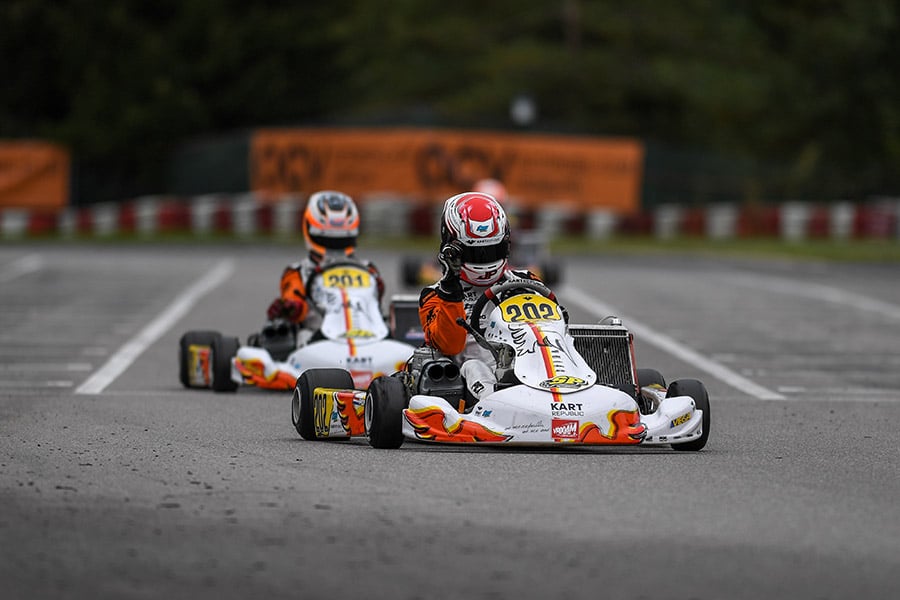 DSKM: Pex-Brüder set the pace in Wackersdorf
Jorrit and Stan Pex (both SP Motorsport) were the standard of all things at the beginning of the second half of the season. Reigning champion Stan Pex was the fastest driver of qualifying in temporary heavy rain. During the later heats, he was replaced by his brother Jorrit. With a victory and a second place, he got ahead and didn’t give up his leading position during the kick-off race on Sunday as well. Pex was in an accordingly good mood in his winner’s interview: “This was a great race, especially because I started on the wet track. I collected valuable points due to this victory.” Fabian Federer (SRP Racing Team) took the role of first pursuer behind the brothers and came close to the leading duo temporarily. There was no serious attack though and so he achieved the remaining place on the podium. Behind him followed David Trefilov (SRP Racing Team) in front of Alexander Schmitz (BirelART KSW Racing).

During the second race, Jorrit and Stan Pex decided the victory between them as well. Until shortly before the end of the race, it looked like a double victory for the older brother. But Stan attacked once more and won in front of Jorrit. Due to this, Schmitz on third place came closer too, but didn’t pose a danger to the two Kart Republic-drivers anymore. Federer came in fourth this time in front of local driver Valentino Fritsch (BirelART KSW Racing) on fifth place. Due to Stan’s victory, things are still exciting regarding the Championship title. “It wasn’t an easy race for us. We were equally fast and didn’t want to risk a collision among brothers. I had some good luck then, attacked once more and won”, Stan commented on the racing result. 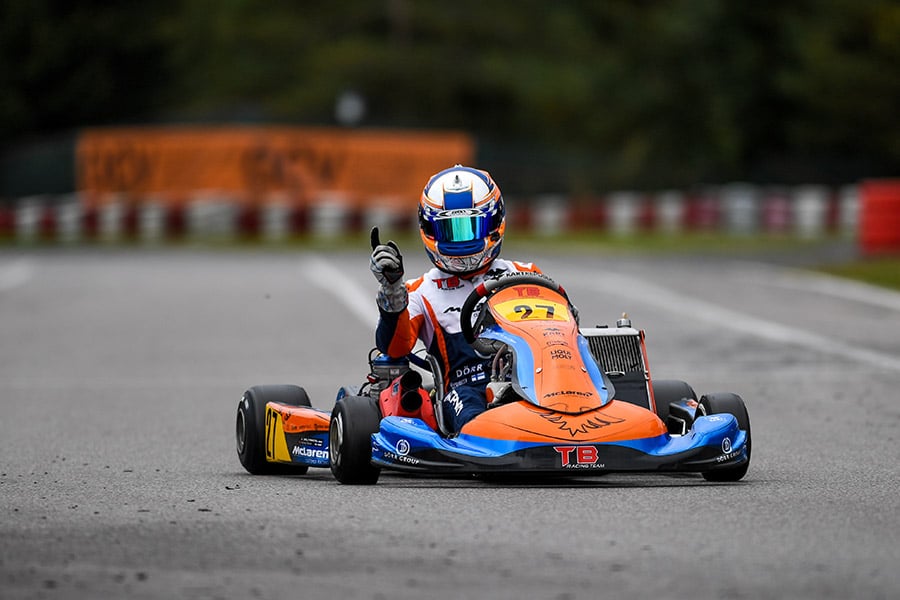 Valtanen then highlighted that he is among the big title favorites this year in the first final race. On the dry track, the pursuers weren’t able to stop him and could only watch him drive away from the field. He was ahead of them by more than four seconds. “I tried to drive away from the field early on and kept my lead. These were valuable points for the Championship”, he summed up his race. The fight for the remaining positions was really close though: Luca Griggs (SFR Motorsport) led the field of pursuers when crossing the finish line in front of Vincent Andronaco (Millennium Racing Team), Georg Kelstrup (TK Racing) and Moritz Wiskrichen (TB Racing Team).

There was a dramatic finish at the second final race. Initially, Valtanen led the field and it looked like a sure victory for the Finn. But Griggs closed the gap from behind and tried to take the lead shortly before the end of the race. This led to a collision which caused both title favorites to drop out of the race. Ben Dörr (TB Racing Team) inherited the lead and the victory in front of Kelstrup and Julie Friis (TK Racing). TB Racing-duo Wiskirchen and Mesch completed the cup ranks on fourth and fifth places. After a difficult season so far, the victory was very freeing for Ben Dörr: “Of course I had a bit of luck, but with all the bad luck I’ve had this year, it’s good that things are turning around for a change. It was a great feeling to cross the finish line as the winner.” 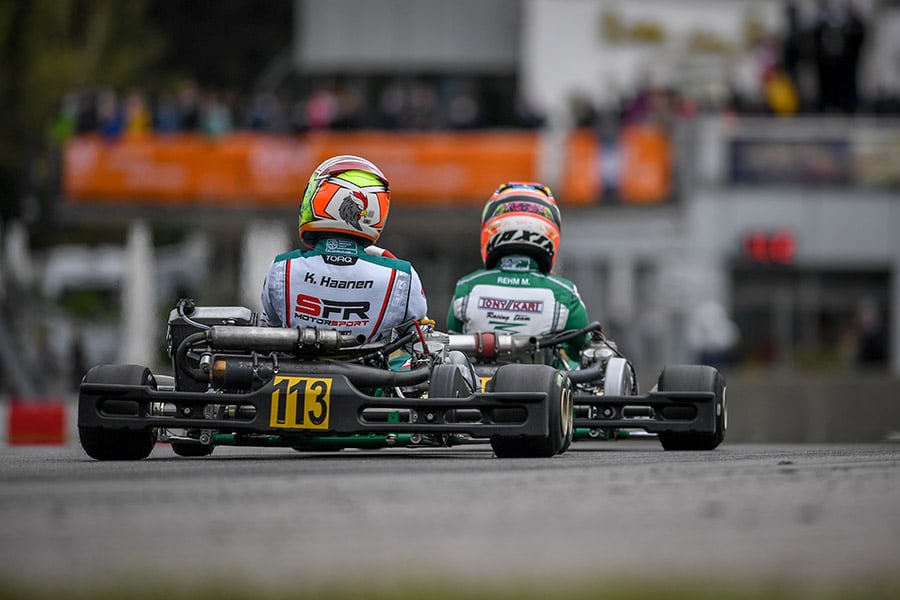 DJKM: Third double victory makes Kris Haanen the early Champion
SFR Motorsport-duo Daniel Guinchard and Kris Haanen drove the exact same time during qualifying and led the field. At the heats, Guinchard achieved pole position and was on the first place of the interim rankings on Saturday evening. The finals of the juniors were close as usual. At the first race, Herolind Nuredini (KSM Official Racing Team) won the start, but wasn’t able to drive away from his opponents. There were several changes at the front during the course of the race. Next to the Schleswig-Holstein resident, Maxim Rehm (Rehm Racing) and Haanen also led the field. The latter came out on top in the end and celebrated his fifth consecutive victory. Kiano Blum (TB Racing Team) drove to second place. Nuredini, Rehm and Mathias Bjerre Jakobsen (RS Competition) completed the top five.

Things were the same at the second final race. Again, as many as seven juniors fought for the top positions. Haanen used his chance at the right time again and celebrated the early win of the Championship due to his sixth race victory: “In six races, I’ve won six times now. That’s just incredible. It’s a great feeling to already win the Championship here in Wackersdorf. I’d like to thank my team and everyone involved in this success.” Kiano Blum from Austria came in second again and thereby strengthened his position in the Championship top three. Rehm came in third and ended up on the podium. The two Danes Marius Kristiansen (HK Motorsport) and Jakobsen followed on fourth and fifth places.

The big final of the German Kart Championship is going to take place in three weeks. The last decisions of the shortened 2020 season are going to be made at the Motorsport Arena Oschersleben. While Kris Haanen already is the winner of the DJKM, everything is still possible in the other grade series.