Powell takes Junior Pole in the European Championship at Wackersdorf 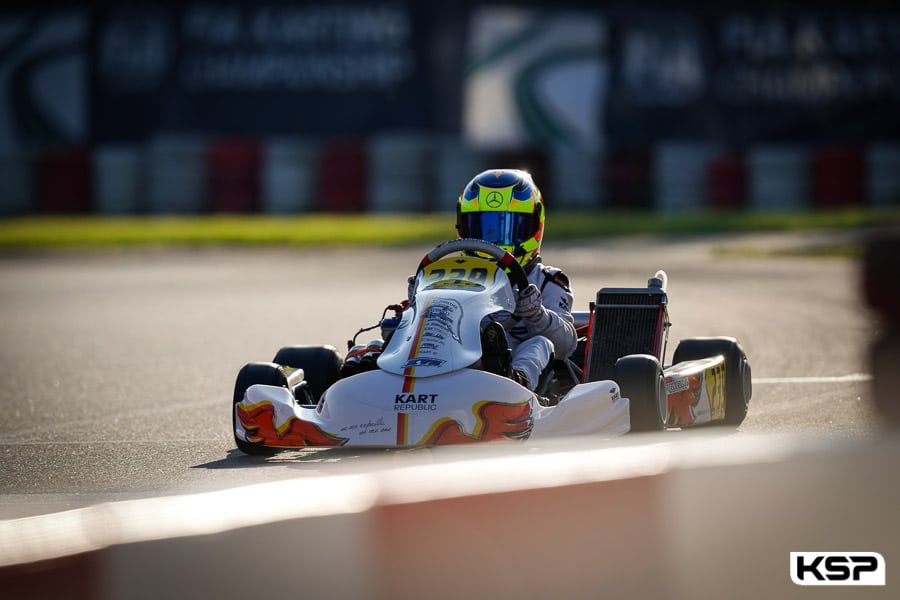 The sky was overcast over Wackersdorf for Qualifying Practice for the last round of the European Junior Championship, but the Bavarian track was dry and the thermometer showed 22°. The conditions were therefore good to start this third round. In the Free Practice on Friday, 11th September, Harley Keeble (Tony Kart/Vortex) was the fastest on 48”129 ahead of Dion Gowda (Kosmic/Vortex) and Ugo Ugochukwu (KR/Iame). The top Frenchman, Arthur Rogeon (Exprit/Vortex) was in the lead by 2 tenths, followed 2 tenths later by Evan Giltaire (Sodi/TM).

RFM driver Dion Gowda confirmed his speed in the first session by finishing with a time of 48”598 on his last lap, 0.121” ahead of Martinius Stenshorne (KR/Iame). Bruno Del Pino followed in 3rd position and Ariel Elkin (KR/Iame) in 4th, with Cristian Bertuca (Birel ART/TM) completing the top five. Antonio Leite (KR/Iame) finished 13th.

In the second session, Alex Powell (KR/Iame) won his duel with his team-mate Arvid Lindblad (KR/Iame) by 39 thousandths with 48”381 on their last lap. Rafael Modonese (Birel ART/TM) finished 3rd by one tenth, followed by Maxim Rehm (Tony Kart/Vortex) and Arthur Rogeon. Maxwell Dodds (Parolin/TM) took only 11th place ahead of Nikola Tsolov (KR/Iame).

Ugo Ugochukwu finished in the lead of the third session with a last lap of 48”475 which allowed him to take an advantage of 0,259” over Harley Keeble. Sonny Smith (KR/Iame) was noticed in 3rd position in front of Karol Pasiewicz (Tony Kart/Vortex) and Wiilliam Macintyre (Birel ART/TM). Maxime Furon-Castelain William Macintyre (Birel ART/TM) was 12th and Alessandro Giusti (KR/Iame) did not enter the track.

Antonelli marks its territory in the OK Qualifying at Wackersdorf