Antonelli marks its territory in the OK Qualifying at Wackersdorf 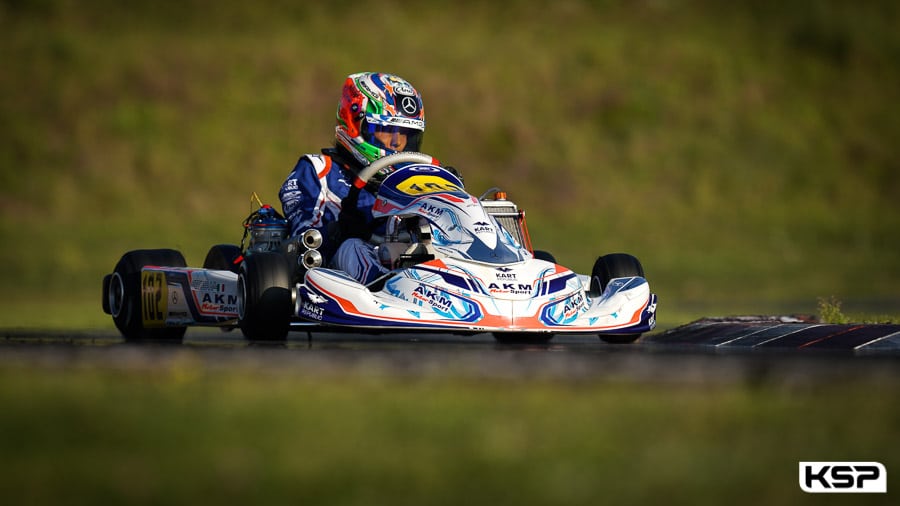 A mild temperature, 22°, and a dry track accompanied the Qualifying Practice for the European Championship OK in Wackersdorf. Divided into four sessions, the 65 drivers alternated their sessions with the Juniors. Andrea Kimi Antonelli (KR/Iame) had clearly distanced his opponents in the Free Practice with a time of 46”775, nearly 2 tenths faster than Luigi Coluccio (Kosmic/Vortex). In the leading group, there were Taylor Barnard (KR/Iame), Juho Valtanen (KR/Iame) and Lorenzo Patrese (KR/Iame), as well as Norton Andreasson (Tony Kart/Vortex), Rafael Camara (Exprit/TM) and Matheus Morgatto (Birel ART/TM). Marcus Amand (KR/Iame) also had a very good speed.

When the Qualifying Practice started, Lorenzo Patrese finished at the front of the first session – 47”240 – followed at 13 thousandths by Nikolas Pirtthilahti (KR/Iame) and at 16 thousandths by Matheus Morgatto. The German Hannes Janker (KR/Iame) was 4th in front of Levente Revesz (KR/Iame) and Dilano Vant’hoff (Exprit/TM) came back to 6th at the last moment. Macau driver Ruben Wang To Yip (KR/Iame) finished in a respectable 8th place.

Unsurprisingly, Andrea Kimi Antonelli quickly took the lead in Session 2 against Joe Turney (Tony Kart/Vortex). The Italian improved to be the only one to pass under the 47″ barrier and finished with the provisional pole – 46”942 – on his last lap. Turney followed him by 0.164”, Juho Valtanen was 3rd by 0.290”, while Taylor Barnard (KR/Iame) was 4th and Noah Degnbol (Tony Kart/Vortex) was 5th ahead of Jamie Day (Birel ART/TM), James Wharton (Parolin/TM), Oliver Gray (Birel ART/TM) and Harry Thompson (Exprit/TM).

Powell takes Junior Pole in the European Championship at Wackersdorf