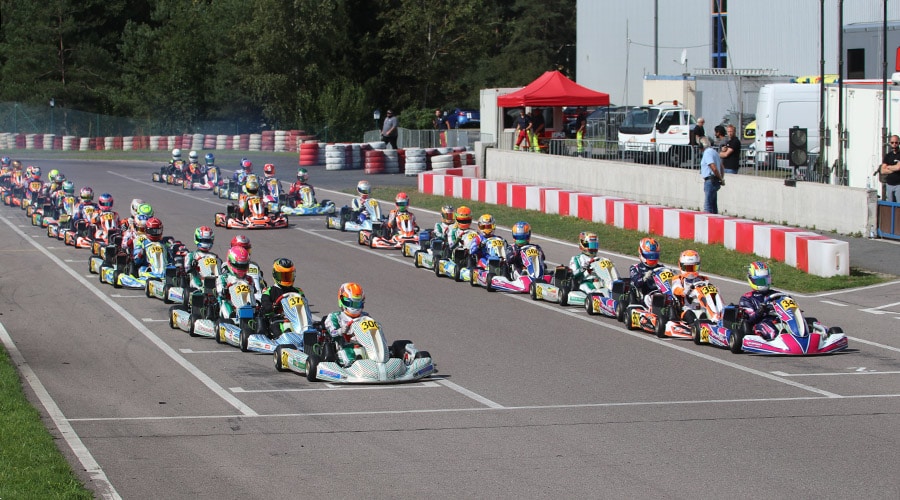 Four weeks after the kick-off of the Rotax MAX Challenge Euro Trophy in Belgium, the European Rotax racers headed for Germany where the second round of the season was held from September 4th to 6th, 2020. Venue was the Prokart Raceland in Wackersdorf which equally hosted the halfway event of the elite RMC racing format. Although the Micro and Mini MAX categories were not part of program this time, over 100 drivers from more than 20 nations entered the second meeting of the year, providing the opening round winners and overall leaders a competitive mid-season event. Late summer weather made for the best racing conditions and an action-packed competition on the 1,190-metre-long circuit in Bavaria.

A remarkable inclusion was the DEKM. The unique German e-karting series made its debut at the event supporting the program of the RMC Euro Trophy. Twelve participants, each equipped with the high performance electric kart “Project E20” from Rotax, contested their second race weekend at Wackersdorf and showcased the potential of the innovative power unit. The two finals were won by Axel La Flamme (ACR Racing) from the UK and Diego Stifter (Millennium Racing Team) from Italy. 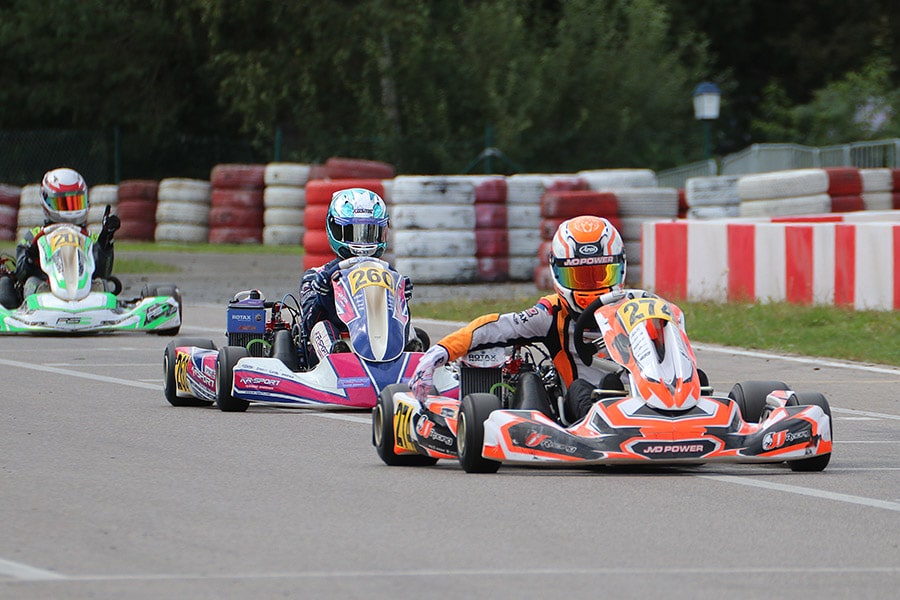 Junior MAX: Kai Rillaerts celebrates second victory in a row
As the weekend got underway it was difficult to make out a favourite in the Junior MAX category: in qualifying, Dutchman Tim Gerhards (SP Motorsport) set the best mark in the field before the Czech Eliska Babickova (TEPZ Racing Team) took the reigns after the heats. But, the pole-sitter would not be able to seize his advantage in the finals and dropped back down the order. Meanwhile, the championship leader Kai Rillaerts (JJ Racing) struck back. The Belgian was in brilliant shape in both finals, although it was not an easy walk for him. Numerous changes in the lead defined the races, which at the end of the day only saw one name on top: Kai Rillaerts. Behind the double winner, who also secured the halfway championship, the German Valentin Kluss (RS Competition) took second place in the day’s classification on home soil, ahead of Freddie Spindlow (KR Sport) from the UK. 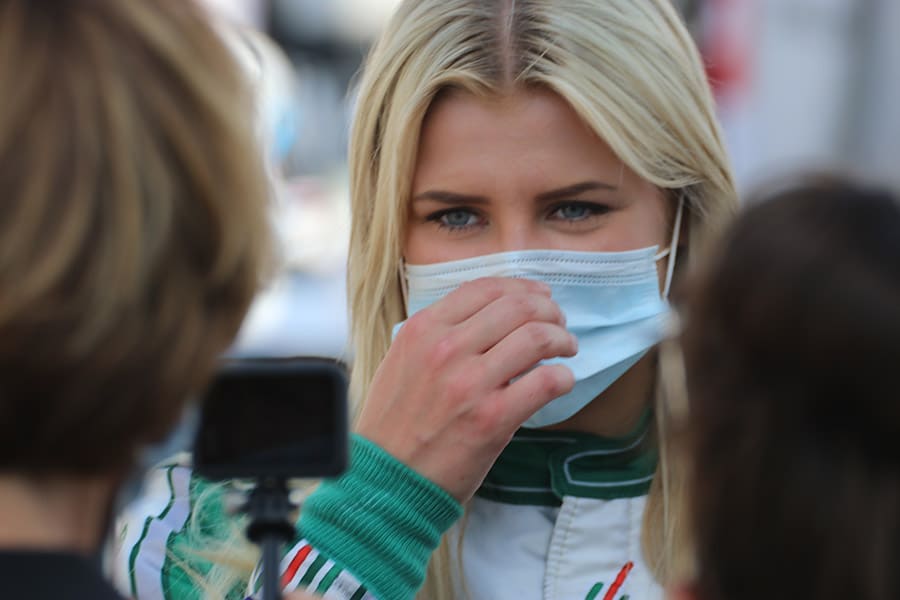 Senior MAX: New winner and new leader
The Seniors represented the largest field of the weekend with 38 participants. In the beginning, Lachlan Robinson (KR Sport) from the Emirates asserted himself at the top in the qualifying. However, in the heats Mathilda Olsson (Strawberry Racing) took command. The defending European champion secured the lead in Saturday’s ranking, gaining the pole position for the first final. And the Swede benefited by another incident when opening round winner and current championship leader Dylan Lahaye (GKS Lemmens Power) had to retire from the event due to a slipped disc after the heats. In the first final Olsson seemed to be driving towards a safe victory, but the Swede made a mistake, got off track and dropped back to fourth positon. Her teammate Mark Kimber (Strawberry Racing) assumed the lead without hesitation and won the race ahead of Lachlan Robinson. In the second final, Mark Kimber repeated his performance. He controlled the field and took a start-to-finish victory, rewarding him with the triumph at round two as well. Lachlan Robinson, who finished P2 in the second final, was runner-up in the day’s standings. Mathilda Olsson completed the podium in third place, thereby taking the overall lead in the championship. 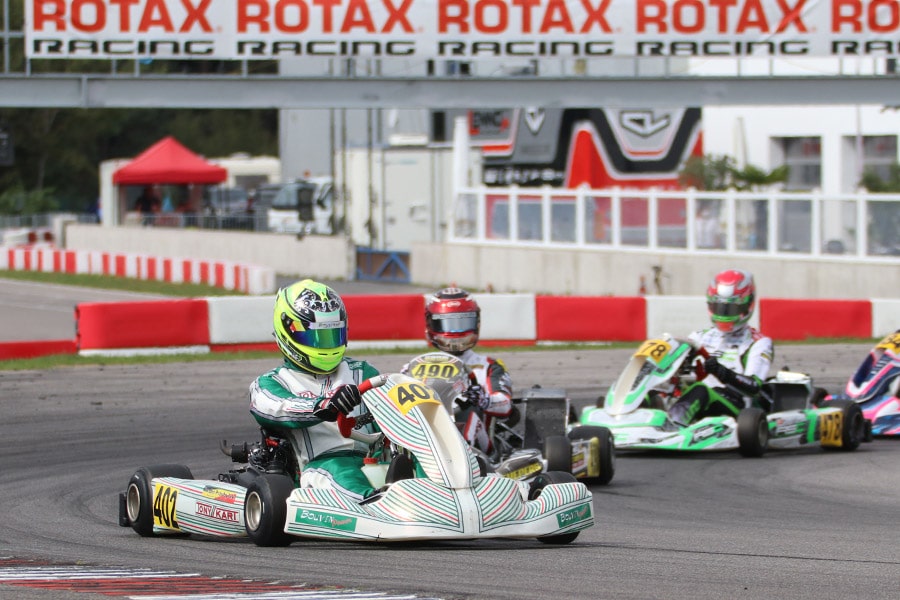 Rotax DD2: Xander Przybylak takes the victory
Sebastian Janczewski (Tony Kart) set the pace during the qualification stage of the DD2 class. Both, in qualifying and after the heats, the Pole was in control. On the day of the final, however, the tide turned; his opponents were able to close the gap and banish the pole-sitter from the top place. To make things worse, a time penalty due to a released front fairing cost Sebastian Janczewski a more competitive result. On the other hand, Xander Przybylak (Bouvin Power) displayed a strong performance. The Belgian got the maximum points in the first final, even though he was not the fastest on track. Instead, it was Florian Breitenbach (Nees Racing) who was setting the race pace. The German did not only post the fastest laptime, but worked his way up from 20th position on the grid to sixth place in the end. And the story did not end there! In the second final, the Maranello driver rocked the boat and took the lead by mid-race distance. He pulled away and ultimately won easily in front of Xander Przybylak. However, this result was enough for the latter to take both – the event’s win and the championship lead. Florian Breitenbach climbed onto the podium in second place, while the Czech Petr Bezel (KSCA Sodi Europe) took third place. 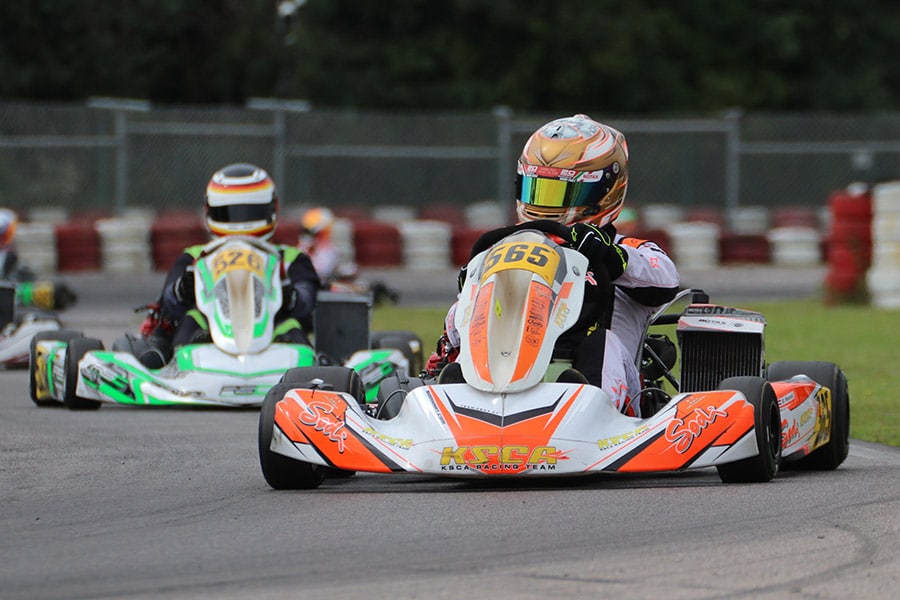 Rotax DD2 Masters: Robert Pesevski dominates
In the DD2 Masters Robert Pesevski (KSCA Sodi Europe) was unbeatable. The defending champion was the benchmark in qualifying, the heats and both finals. With the maximum number of points, he undoubtedly won the day’s classification. The best supporting role was played by Slawomir Muranski (46Team) from Poland, who finished second on the podium and also boosted himself to the top of the championship table. The Swiss Alessandro Glauser (FM Racing) finished the weekend in third place.

Meik Wagner, organizer of the RMC Euro Trophy, made his conclusion at the end of the event: “I am happy with our stop at Wackersdorf. Being a championship of international status, we clearly feel the restrictions caused by COVID-19, which makes it difficult for many drivers to attend our events. If one considers the circumstances, all categories were well-filled and the DEKM has also enriched our program. Apart from the Juniors, we saw new winners and new championship leaders in all classes, which speaks for a balanced season and an exciting show for the upcoming races.”

The next stop of the Rotax MAX Challenge Euro Trophy will be Italy. From October 23rd to 25th, 2020, the series will herald the final spurt of the season on the Adria Karting Raceway not far from Venice. The Micros and Minis will again reinforce the program with an open race. Further information about the Rotax MAX Challenge Euro Trophy is available on the official homepage of the series at www.rotaxmaxchallenge-eurotrophy.com.

140 drivers in Wackersdorf: participation on the rise