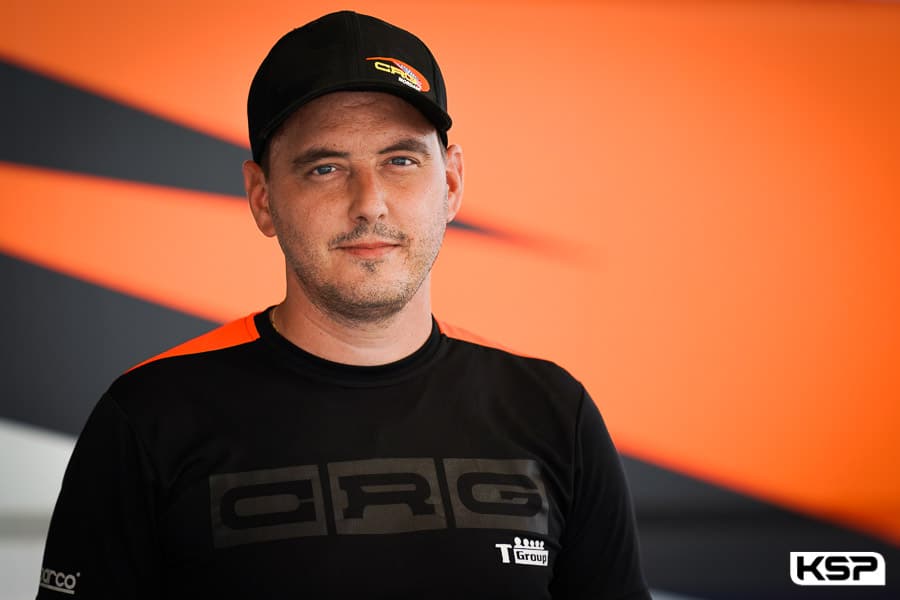 Glenn Keyaert (33 years old) has spent a lot of time in the karting world. From a young Belgian beginner, he reached the highest international level as a driver. Then, he experienced the same climb, but on the other side of the fence in the official CRG team. Glenn Keyaert started out as a simple mechanic and became team manager. A great success! Proof that drivers are not the only ones to climb the ladder.

When did you get into karting?
My father discovered the discipline at an indoor circuit in Belgium with a friend, who then decided to buy a Mini-Kart for his son. I followed the same path and was able to start competing in the late 90s. I raced for several years in Belgium, before discovering international events. I joined the VDK Racing team, which at that time imported CRG chassis. From my first results, Giancarlo Tinini, the factory manager, supported me. In addition to everything he was able to do for me later on, I was always very grateful to him. Thanks to his help, I was able to race in Formula A, then in 2007 and 2008 in KF1, which was the premier class at the time. Only once, I was unfaithful to CRG by taking part in my last big international competition with an Intrepid chassis.

What are your main results?
I have won the Belgian Championship several times, as well as the qualifying event for the European Intercontinental A Championship in 2003. It’s really a very good memory, I dominated the competition from Qualifying to the last Final. After that, I was often fast, but I lacked the aggressiveness in the pack to aim for the podium. The French Championship was also very satisfying.

Did the transition to the technical part happen naturally?
My father made me work on the equipment from a very young age, I was in charge of preparing my kart before the races. I always liked that and I already started helping drivers at the end of my career. I had also reached an age where I had to think about working. That’s one of the reasons why I hung up my helmet. I followed Michelle Gatting from VDK Racing to the official CRG team between 2010 and 2011. That’s when the Italian factory offered me a full-time job and I moved to Italy. At first I was lucky enough to be housed in one of the flats on the CRG premises.

When did you take on more responsibility at CRG?
Team manager Euan Jeffery changed his horizons by taking over the commercial part of the rental karts. Giancarlo Tinini trusted me to replace him at the beginning of the 2015 season. If I look at where I come from, this was a great opportunity for me. The realisation of a dream!

What is your role throughout the year?
I take care of the team’s logistics, establish the work plan at the track and organise the schedule when we are back in the “Racing Team” workshop in Desenzano del Garda. We have to make sure the chassis are ready for each race and make sure we have a sufficient stock of spare parts. Every time there are tests, we have to draw conclusions, to know what was positive or negative. I pass on these technical reports to Giancarlo Tinini and we discuss the decisions to be taken together.

The CRG team is not having its best season in 2020. What is your analysis?
We know that in karting, the wheel is always turning. Until very recently, we have won many international victories. We still have excellent equipment. It is true that the CRG factory has invested in areas other than competition, starting with leisure karting. The group has chosen to diversify to ensure its future. I think it’s a good strategic choice, even if it may have slowed down our progress a little at one time. I would remind you that at a high level, the costs of the racing department are very significant. In addition, we may not have had the right drivers at the right time. Quantity also plays a role. The more drivers you have in the Final, the more likely you are to have one on the podium. We have put our trust in young hopefuls who still lack experience, but whose progress is evident.

Has the impact of the pandemic been significant?
We’re living through a difficult year, Covid-19 hasn’t really helped us get back to our 2016 or 2018 level. However, CRG has a solid structure and the production of chassis and parts remains very strong. At the same time, we continue to manufacture equipment for other brands. The development of equipment will continue to grow in the coming years. It is certain that CRG intends to return to the podium in major competitions very soon. CRG has always won and will win again soon. Our objectives have not changed! For my part, I’m going to fight for that and pass on my motivation to the whole team…