A great competitiveness in the opener of the Italian ACI Karting Championship at the International Circuit in Triscina where the opener has been great despite the very hot weather that challenged drivers and karts alike. In KZ2 the victory went to Lombardo and Palomba, in International MINI to Nakamura and Przyrowski, in 60 Mini to Schillaci and Blanco, in IAME double win in X30 Junior for Scognamiglio, for Comanducci in X30 Senior. 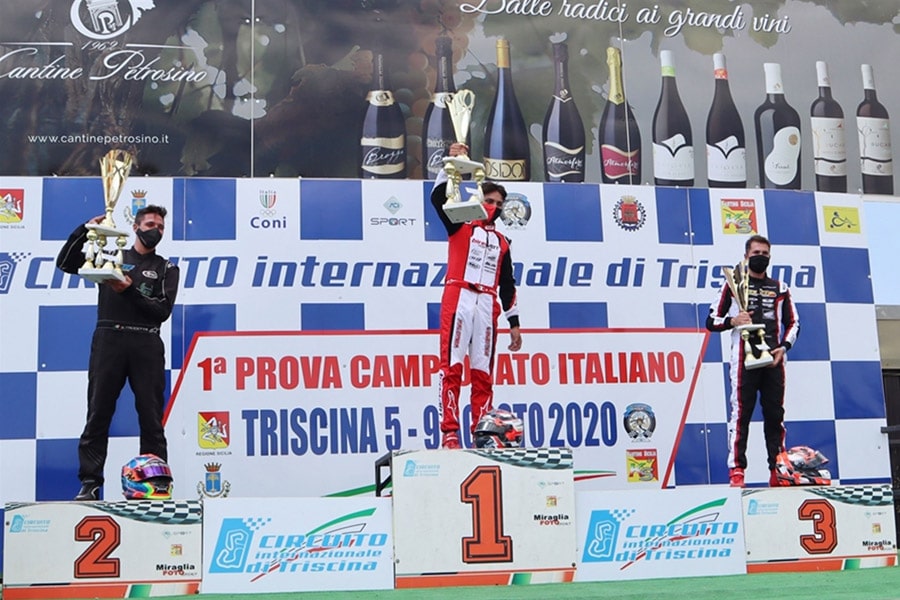 The 2020 edition of the Italian ACI Karting Championship started on a high despite the date change to August 7-9 dye to the Covid-19 emergency with 5 categories gathering at the circuit in Trapani with all their protagonists challenging each other.

Spectacular KZ2: Lombardo on top, exciting Palomba
In KZ2, the duel announced between the exiting champion Simone Cunati on BirelART run by team Modena Kart and two times vice-champion in 2018 and 2019 Giuseppe Palomba on BirelART of team LG Motorsport had the Sicilian Angelo Lombardo on Parolin-TM as the man in the middle that won the first of the two finals. The victory of Lombardo in Race-1 was elicited by an incident involving Palomba and Cunati when they were fighting for P2. Palomba had the worst and retired from the race, but Cunati could not fight for the victory and lost also P2 to a great Davide De Marco (KR-Iame). Cunati had to settle for P3. Race-2 has seen a very strong Palomba started from the last position and climbing all the way up to the victory, overtaking again Cunati who had managed to gain P1. Lombardo had to retire instead due to a contact with Luigi Di Lorenzo of Team Modena Kart. The final overtaking move of Palmoba cost Cunati a few positions, but he managed to recover up to P3 as he was proceeded not only by Palomba but also by Simone Alogna, on Intrepid-TM.

Nakamura and Przyrowski to the fore in International Mini
The two finals of the newly-homologated CIK-FIA International MINI Group 3 have been spectacular. The victory of the first final went to the Japanese Kean Nakamura Berta (Team Driver/KR-Iame), who was followed by the Pole Maciej Gladysz (Parolin Racing Kart/Parolin-TM) and by the American Kai Sorensen (Parolin Racing Kart/Parolin-TM). The closing laps of Race-2 saw the classification being turned upside down and Jan Przyrowski of team AV Racing had the upper hand on Parolin-TM, taking a great win at the end of a lot of position exchanges. P2 went to Antonio Apicella (Team Driver/KR-Iame), while Ukraine’s Luka Fedorenko (Team Kidix/KR-Iame) was third. Sorensen was fourth, Nakamura 21st and Gladysz 24th after being fighting for the podium until the end.

60 Mini dominated by Sicilians
Sicilian drivers came to the fore in the National 60 Mini with Daniele Schillaci (Team Driver/Parolin-Tm) winning Race-1 ahead of Salvatore Sardo (Intrepid-TM) and Sebastiano Cultraro (Parolin-Tm). In Race-2 the other Sicilian Angelo Bruno Blanco (Parolin-TM) led Filippo Sala (Team Driver/Parolin-TM) and the other strong Sicilian Aurora Mistretta (IPK-TM). In the second final Cultraro was fourth, Sardo was fifth and led the very young Edoardo Mario Sulpizio (TK Kart/Croc-TM), while Schillaci had to retire from the race.

Double wins for Scognamiglio (Junior) and Comanducci (Senior) in X30
Category IAME X30 saw both categories, Junior and Senior, ending with two one-twos by Manuel Scognamiglio (Gamoto/Tony Kart-Iame) in Junior and Cristian Comanducci (PKR/Tony Kart-Iame) in Senior. The races of this category have been very nice and hard-fought and it is destined to see more and more drivers joining since the next round in Sarno next August 30th and in Siena on September 13th.

In the first of the two X30 Junior’s finals, Manuel Scognamiglio (Gamoto/Tony Kart-Iame) won from Rocco Mazzola (PRK/Tony Kart-Iame) and Oleksandr Bondarev (CKC Racing/Tony Kart-Iame), who recovered 9 places up to the podium. In Race-2 Scognamiglio recovered well from P8 with the top 8 grid inverted and won again, while Bondarev was second and Mazzola third. Nicholas Pujatti (Team Driver/KR-Iame) had to settle for P4 after leading the opening laps.

The next round will take place at the International Circuit Napoli in Sarno on August 28-30th.

Complete results are available at http://youcrono.it.

F4 Academy: Nogaro opens the festivities with a quality grid