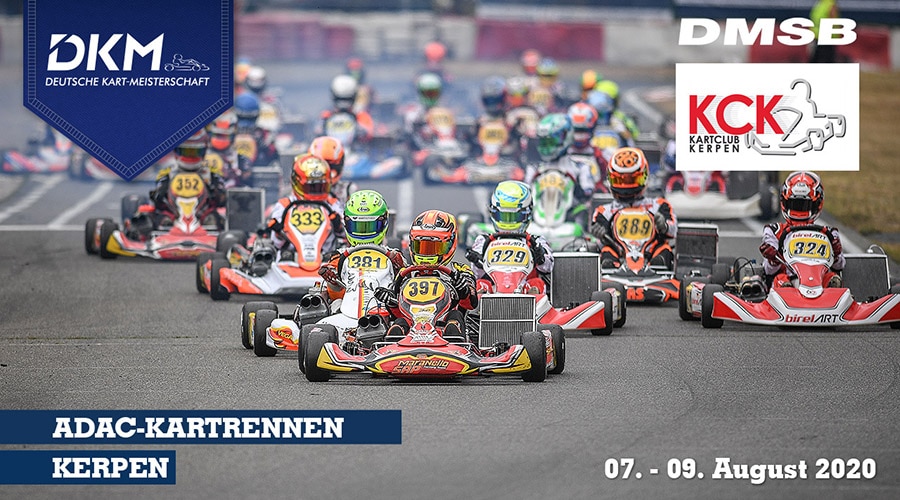 With a delay of three months, the German Kart Championship is now going to start into the new season. Next weekend, 120 participants are going to start on the Erftlandring in Kerpen. The event is going to take place under strict hygiene requirements. The DKM racing calendar 2020 has been shortened to four events.

Originally, the season half-time of the German Kart Championship 2020 was supposed to take place in Kerpen – now it’s the kick-off to an unusual season. The Corona pandemic brought the country to a standstill in mid-March and also caused a mandatory break in kart racing. As one of the last big kart racing series, the DKM is now also going to start into the racing action and is looking forward to a high-class field of participants in Kerpen. The four grade series DKM, DJKM, DSKM and DSKC promise lots of excitement.

The interest in the DKM is continuously high. The people responsible were accordingly motivated to make a racing season possible – this will only consist of four races, but the choice of race tracks is challenging. Next to the event in Kerpen, the kart racing grade series of the DMSB will travel to Mülsen, Wackersdorf and Ampfing. When choosing the new dates, the organizational team tried to avoid overlaps.

„We all had to learn to deal with the situation, but we think that we’ve still managed to find a good compromise. There’s no overlap with the big racing series and the travelling of the teams has also been taken into consideration”, series coordinator Stefan Wagner explains.

The event in Kerpen, which is going to be carried out by the Kart-Club Kerpen e.V., is going to take place in compliance with an extensive security- and hygiene-concept. This takes into account that there will be no more than 600 people on the premises, everyone has to wear a mask that covers mouth and nose and has to adhere to the rules of distance. At the same time, a new distance control system (DCU) will be used, which stores close contacts and makes a complete follow-up possible. Spectetators are not allowed at the track.

Rookie or routine driver – who will prevail on the track?
From a sportive point of view, the races in Kerpen can be awaited with high anticipation. At the juniors, the cards will be dealt completely anew. Current champion Robert De Haan from the Netherlands is not going to participate again and all of his pursuers of the past years have also quit. So the focus is now on new faces that will meet up for the first time in Kerpen.

At the DKM, Harry Thompson and Hugo Sasse, the top drivers of the past years, have said goodbye to the championship. Kas Haverkoort (SFR Motorsport) is still starting though. The Dutchman won the DJKM in 2017 and drove among the front positions in the German Kart Championship as well. His fellow countryman De Haan (Energy Corse) could become one of his strongest opponents. After his junior title he is now aiming for the double in the DKM.

Even though the field of the German Shifterkart Championship is a little less strongly manned with 16 drivers, the strength of the drivers is not affected by this. With Jorrit and Stan Pex (SP Motorsport), Fabian Federer (SRP Racing Team) and Alexander Schmitz (BirelART KSW Racing), four DSKM champions are going to participate and guarantee close duels. Current DMSB Shifterkart Cup Champion Davids Trefilovs (SRP Racing Team) is going to join them. After his success at the Cup, he is now rising to the DSKM.

A completely new balance of power can be seen at the DSKC. Due to the regulations, the five best drivers of the last year rise to the DKM or DSKC and make way for new drivers. In the field consisting of 34 drivers there are numerous participants with chances of winning the title, among them Tim Tröger (Mach1 Motorsport), who won the final of the DSKC in Lonato last year.

Full timetable and lots of live action
The participants are going to start with the free trainings on Friday, August 7th. After that there will be a first inclination of how the fields are going to be balanced. Things are going to get serious on Saturday with qualifying and the heats. These will determine the starting positions for the final races on Sunday. Due to the official requirements, there will be no live audience at the event in Kerpen. But there will be an extensive live-stream again at www.kart-dm.de with more than 16 hours of live images on Saturday and Sunday. Moreover, there will be inside-stores on the social media channels of the DKM.