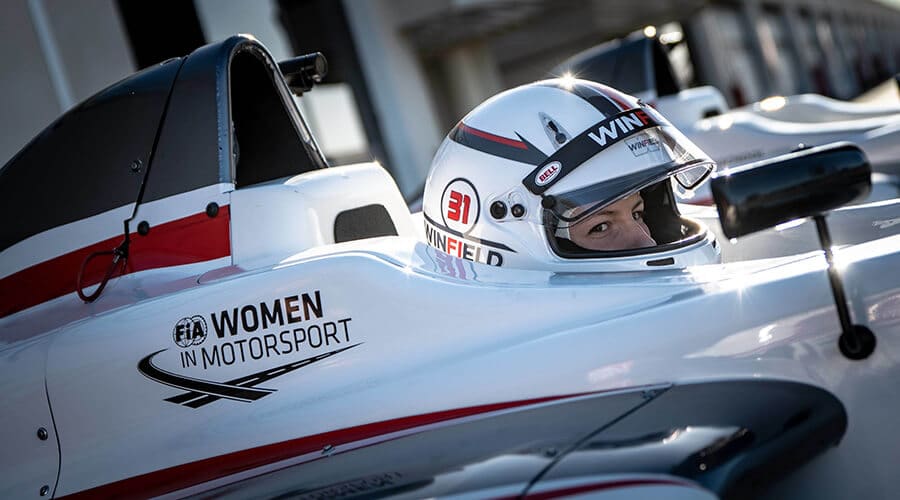 The FIA and its Women in Motorsport Commission are delighted to launch ‘FIA Girls on Track – Rising Stars’, an innovative new project to detect and nurture the female racing talent of the future. The project, in association with its first partner, Scuderia Ferrari, aims to identify the best 12-16 year old female drivers from around the world and help them reach a professional career in motor sport at the most critical age of growth.

With support from the FIA Innovation Fund, which backs new projects intended to generate an enduring legacy for the global FIA community, the Women in Motorsport Commission can realise yet another ambition by partnering with Scuderia Ferrari and its world-famous Ferrari Driver Academy (FDA) to jointly develop a strong and long-term pathway to support young females on their motor sport journey. The collaboration sees both parties commit to a four-year programme resulting in two drivers potentially joining Ferrari for an FIA Formula 4 Championship season.

“FIA Girls on Track – Rising Stars is another immense step forward at the grassroots level of the sport and, with manufacturer partners, we have a really concrete opportunity to find, develop and support young women drivers,” said Michèle Mouton, President of the FIA Women in Motorsport Commission. “To be able to collaborate with Ferrari, our first partner of the programme, is fantastic and real recognition of the progress we continue to make after 10 years of our Commission’s work. It is an incredibly exciting multi-year agreement, which we hope will result in two winning drivers becoming Ferrari’s first-ever female racers. That is a very special thought and would be an historic moment for our Women in Motorsport Commission.”

Scuderia Ferrari’s Mattia Binotto added: “We are really pleased to be collaborating with the FIA in this innovative Girls on Track – Rising Stars programme. We are firm believers in the value of helping youngsters develop in motor sport. The FDA has been operating for over a decade now, not just purely and simply selecting the best drivers, but also working on their cultural, technical and ethical education. With this in mind, we felt we had to make a further effort to expand our area of operation to include female youngsters who want to get on in motor sport. Although there is no actual barrier to their participation, we are aware that it is harder for women to progress in this field. That’s why we have responded enthusiastically to the FIA initiative and we believe that we can help introduce even more young women to this fantastic sport. Who knows, maybe one day we will once again see a woman competing in a Formula 1 World Championship race for the first time since 1976.”

Global brand Pirelli, renowned for its cutting edge technology, high-end production excellence and passion for innovation, has also joined the programme to support the progression of young women in motor sport. “For Pirelli it’s a pleasure to support this initiative that is totally aligned with our tradition,” said Mario Isola, Head of F1 and Car Racing at Pirelli. “In fact, Pirelli has been sustaining young drivers’ programmes for many years and has been involved with the FIA in several campaigns focused on sustainability and safety. FIA Girls on Track – Rising Stars brings together all of the best of these points and has got many characteristics to write an important page on motor sport history.”

The FIA Girls on Track – Rising Stars programme kicked off earlier this year with a worldwide detection among the FIA’s 145 national sporting authorities, who nominated promising young drivers with national or international racing experience. Twenty drivers from five continents have already been selected and will now be invited to a shoot-out in October hosted by the Winfield Racing School, the iconic and historical racing school based at the Circuit Paul Ricard renowned for being the nursery for most of the well-known drivers from the 70s to the 90s. From here, 12 drivers will be selected to undergo two different karting and Formula 4 focused training camps in October and November, also hosted by Winfield Racing School along with kart partner, Praga. Just four drivers will then be selected to attend a one-week course at the Ferrari Driver Academy, also in November. Based in Maranello, Italy, the aim of the Academy is to help shape drivers across different aspects of personal preparation and driving technique, as well as introducing them to the sport’s economic and media world. 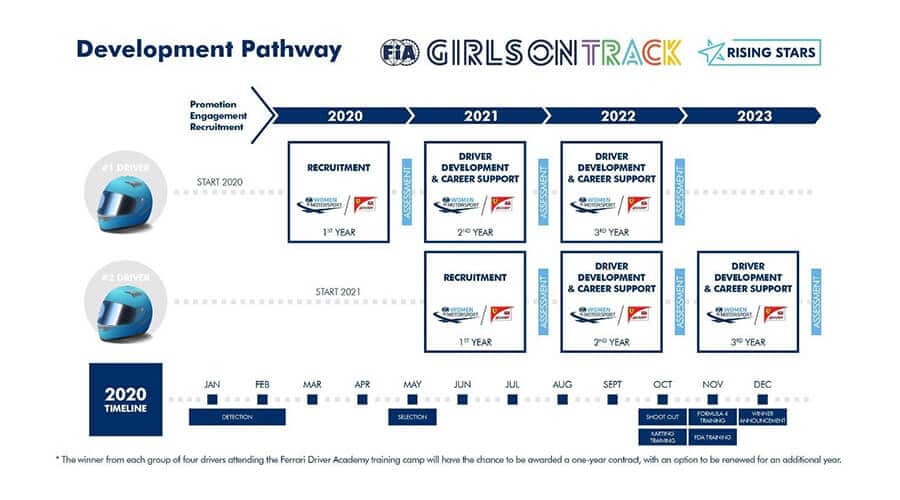 Subject to final assessment of the racing talent, the best of the four drivers could be awarded a one-year contract to join the Ferrari Driver Academy programme for an FIA Formula 4 season in 2021. With Ferrari having an option to renew the driver’s contract for an additional year, its first female racing driver could also compete in 2022. And, as this is a four-year programme, 2021 will also host a second call for talent among the FIA’s ASNs and the same process will result in a second female driver becoming part of the Ferrari Driver Academy.