Qualifying heats at the WSK Final Cup in Adria 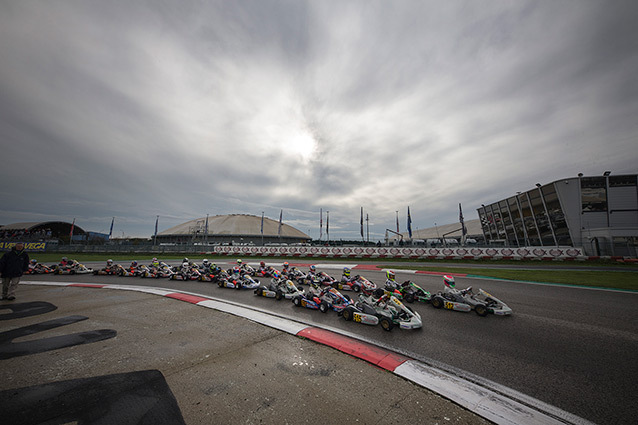 The moment of the Finals of the WSK Final Cup – live in streaming – has arrived.

The grand finale of the event is approaching fast: tomorrow, at the Adria Karting Raceway, the winners of the WSK Final Cup will be celebrated. It is the last event of the international Karting season promoted by WSK. The event can boast over 220 entrants, who have completed the qualifying stage today. Twenty-six qualifying heats (above, the starting procedure of one of today’s 60 Mini races), which came after the six races which took place yesterday. So, it is now time for the most exciting moment of the competition: the finale stage, which starts tomorrow with the series of the Pre-finals – double race for the OK, OK Junior and 60 Mini categories and only one race for the KZ2. All the races will be streamed live from the circuit in Adria; the coverage will finish in the afternoon, with the Finals. The races will be streamed live on wsk.it and on the official Facebook page of WSK Promotion.

Jean Luyet is now the frontrunner in KZ2.
Jean Luyet (CRG-TM-Bridgestone) is the surprise of the day in KZ2: the Swiss won today’s two heats, closing the gap with the two Italian drivers Leonardo Bizzotto (Formula K-TM) – yesterday’s pole sitter – and Matteo Zanchi (GP-TM) – winner of the first heat -. Tomorrow Luye will start from the first slot of the grid; next to him the French Jean Nomblot (Sodikart-TM), who finished today’s races always close to the Swiss. second row for Zanchi and the Swedish Benjamin Tornqvist (CRG-TM), who recovered lots of positions in today’s races.

Lorenzo Travisanutto keeps the lead in OK.
The Italian Lorenzo Travisanutto is really aiming at victory in this edition of the WSK Final Cup in the OK category. He won two heats today, after the second place achieved yesterday in the first heat. The British Joseph Turney (both the drivers on Tony Kart-Vortex-Bridgestone), however, kept the pace of the Italian driver, winning the heat in the morning after the victory he achieved yesterday evening. Eventually, Travisanutto had the upper hand thanks to a second place and he is the pole sitter of the Pre-final A, while the Brit will occupy the first slot in the Pre-final B. Second place, next to Travisanutto, for the Russian Kirill Smal (Tony Kart-Vortex), who achieved two second and a fourth place; two good placings allowed the British Taylor Barnard (KR-Iame) to grab the second position in the Pre-final B. The German Hugo Sasse (Parolin-TM) and the Dutch Dilano Van’t Hoff (Exprit-TM) had some troubles during the race: they won a heat each, but they will start from the back rows of the grid tomorrow.

Andrea Antonelli still unbeaten in OKJ.
Four victories out of four heats: the Italian Andrea Kimi Antonelli (KR-Iame-Vega) replied to the Russian Nikita Bedrin (Tony Kart-Vortex), yesterday’s pole sitter and the winner of a race today. Antonelli will be the pole sitter in tomorrow’s Pre-final A, with the Russian next to him in second position. Good performance for the Dutch Rober De Haan (Energy-TM), who succeded twice today and will be in the first slot of the grid of the Pre-final B, with the British Arvid Lindblad (KR-Iame) next to him. The Australian James Wharton, the Polish Tymoteusz Kucharczyck (both on Parolin-TM) and the Norwegian Martinius Stenshorne (KR-Iame) won a heat each.

Dmitry Matveev takes the lead in 60 Mini.
Great battles in 60 Mini, with the Russian Dmitry Matveev (Energy-TM-Vega) who won four races and took over the leadership of the category. Matveev will be the pole sitter in the Pre-final A, while his fellow countryman, Kirill Kutskov (Energy-TM), thanks to a consistent performance which allowed him to win twice and to score two second places, will occupy the pole position in the Pre-final B. Excellent performance for the Chinese Yuampu Cui (Tony Kart-TM), who will start next to Matveev in the front row thanks to his two victories; Rashid Al Dhaheri (Parolin-TM), from the Arab Emirates, was the fastest yesterday and won twice today, but he has to settle for the second position in tomorrow’s Pre-final B. The Russian Maksimilian Popov, the Danish August Therbo, the Polish Jan Przyrowski, the Thai Enzo Tarnvanichkul (all on Parolin-TM) and the Russian Gerasim Skulanov (IPK-TM) won a heat each.