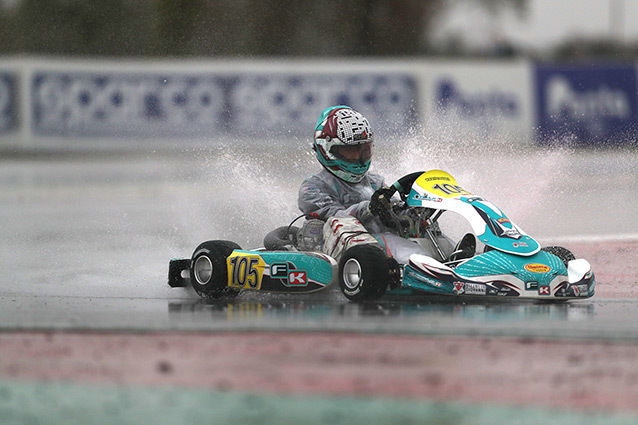 Adria tests the over 220 drivers taking part in the WSK Final Cup.
The WSK Final Cup is proving, once again, how challenging the WSK competitions are. It is the last 2019 event, at the Adria Karting Raceway in Adria (northern Italy); more than 220 entrants, coming from 40 countries from all around the world, battled on the wet asphalt of the track. The qualifying stage and the first series of heats took place under the rain. The event of Adria, a single race competition, allows drivers to give their best looking for the best performance: they don’t have to score points, their only concern is arriving ahead of their rivals in the finals on Sunday 17th. For many drivers is the last occasion to get their payback on the top drivers of the season.

Leonardo Bizzotto is the pole sitter in KZ2.
The KZ2 opened with the outstanding performance of the Italian Leonardo Bizzotto (on top, Formula K-TM-Bridgestone), the fastest in qualifying thanks to his 1’04″903. Behind him another Italian, Matteo Zanchi (GP-TM), and the Swedish Jesper Sjoberg (CRG-TM). The result of the first heat was completely different, with the victory of Zanchi, followed by the Italian Lorenzo Giannoni and the French Jean Nomblot (both on Sodikart-TM). Great performances are expected in tomorrow’s heats.

Lorenzo Travisanutto leads in OK.
The Italian Lorenzo Travisanutto was the best in OK: he stopped the clock at 1’05″079. Behind him, the British Joseph Turney, followed by the Spanish Josep Marti Sobrepera (all on Tony Kart-Vortex-Bridgestone). In the afternoon, Turney proved that he is the driver to beat: he won the first heat of the weekend, with Travisanutto in second position. In the following race the winner was the German Hugo Sasse (Parolin-TM), who won ahead of Marti.

Best time for Nikita Bedrin in OKJ.
The Russian Nikita Bedrin (Tony Kart-Vortex-Vega) had a great start in OK Junior: he set the best time with 1’06″276. However, if the Russian aims at victory, he will have to deal with Christian Ho (KR-Iame) from Singapore, second ahead of the Dutch Robert De Haan (Energy-TM). Other drivers joined the list of the frontrunners: among them the Italian Andrea Kimi Antonelli (KR-Iame), who beat De Haan, while in the second race the winner was the Australian James Wharton (Parolin-TM) and Ho was the runner-up.

In 60 Mini Rashid Al Dhaheri is the fastest.
In 60 Mini, the pole position went to Rashid Al Dhaheri (Parolin-TM-Vega) from the Arab Emirates: he stopped the clock at 1’15″089. Behind him the Russian Kirill Kutskov (Energy-TM) and the French Luis Iglesias (IPK-TK). The first heat went to Kutskov, who beat Al Dhaheri, the runner-up. The second heat was won by another Russian, Dmitry Matveev (Energy-TM), who won ahead of Iglesias. The last scheduled race went to the Chinese Yuampu Cui, who won the third heat ahead of the French Jules Caranta (both on Tony Kart-TM).

Excitement is building for the video coverage of the WSK Final Cup.
There are all the conditions for a gripping weekend of kart racing. Fans will be able, as usual, to follow all the stages of the event: the live timing is always available on wsk.it, while on Sunday 17th the live streaming will be a further reason to go to the official WSK website from 9:50 a.m., for the start of the Pre-finals (two races for the OK, OKJ and 60 Mini categories). Following the Pre-finals, the 4 Finals: 11 races in total, all streamed live on wsk.it and on the official Facebook page of WSK Promotion.