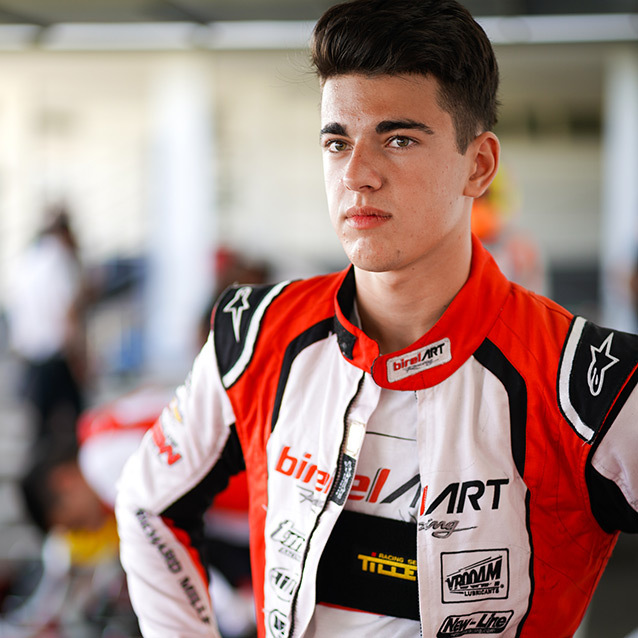 “The discovery of KZ2 was a revelation for me”

Noted for his recent performances in the FIA Karting European Championship – KZ2 and in the German Championship (DSKC), Valentino Fritsch is a driver progressing fast. Now 17, he started kart racing in 2016 and is trying to make up for lost time by driving as often as he can at Wackersdorf, where the circuit manager is none other than his father, Stefan Fritsch.

When you grow up at a track, like you have at Wackersdorf, is becoming a kart driver natural?

For me, not necessarily immediately! When I was younger, my father was so busy developing the circuit business that he did not have time to take me racing at all. Also, during my first laps in a kart, it was not much fun. At first, I was not particularly interested in karting, I preferred other sports like tennis, football and table tennis. Finally, I tested an OK-Junior kart one day in 2016 and then I wanted to persevere. I gradually became more interested. In 2017, I participated in a few races in OK, before contesting a full season in this category in 2018. Then, a little later on, I found myself driving a KZ2. It was love at first sight. I immediately knew that my future was here!

Do you lack experience at this level?

Yes, completely. I had everything to learn. From then on, I was happy that my father was the circuit manager. I was able to test a lot and close my performance gap against my rivals. I wanted to be competitive from the beginning of the 2019 season. I admit that this proximity to Wackersdorf is an advantage. Today, I race on a Birel ART chassis, which is the brand sold in the store located at the circuit, and I can test almost whenever I want.

Are you happy with your progress?

The last few months have been positive. We did a very good job, both with the KSW team with whom I race in Germany, and with the factory team at the European Championship. I have recently had some encouraging results, especially in the DKM. And at the FIA Karting European Championship in Sarno, the 4th fastest time allowed me to fight at the front in all the races. It’s motivating!

What are your next goals?

I still want to improve myself. I think I have a good margin of progress in front of me. I want to fight for the podium in every race and I want to finish the 2019 season. Today, I am not thinking specifically about cars, I am focused on my career in karting. It’s such an exciting sport, so exciting: I love it!

Do you help your father at the circuit often?

My education remains the priority and I try to organise myself by managing my karting trips. I have to catch up when I’m away. But indeed, I try to support my father as much as I can. It’s interesting to see how it goes on the other side of the fence. I am proud of what he has built with his team in Wackersdorf, as it has become a popular circuit for drivers and teams. The complex hosts the most spectacular competitions, with excellent grids. Every year, all the people in charge of organisation work really hard to set up some nice events, especially in FIA Karting. For example, the World Championship in 2017 was a great success. In 2019 the CIK-FIA trusted us again with a European Championship and Academy Trophy event. This is obviously done with the support of the associations and federations that govern our sport.

Is Wackersdorf your favorite circuit?

Yes, along with Sarno and Lonato. Wackersdorf is a very rhythmic circuit. It generates great races, always interesting to watch, because the gaps are often reduced between the drivers. It is very satisfying for me to see my family involved in this circuit, which is to me the most beautiful in Germany.

What are your qualities as a driver?

I am immensely committed in improving my performance with the tools we have in the team. I think to be consistent, which is useful to properly analyse the successive situations we experience. My will to progress is strong and constant.

What do you think of KZ2?

It’s a great category! The equipment is very competitive and the on-track battles are incessant, at all levels of the pack. We never have time to breathe, to rest, or we immediately lose places. You have to stay focused and incisive. Between speed, strategy, physics and technique, balance is never easy to find in KZ2 and you can quickly lose the pace. It is a demanding category. Off the track, there is a huge amount of work to be done by the team.

Final race day at the WSK Open Cup at Castelletto

The Memorial Carlo Fabi : in the history of the Trofeo delle Industrie