The duels of the WSK Open Cup kicked off in Castelletto 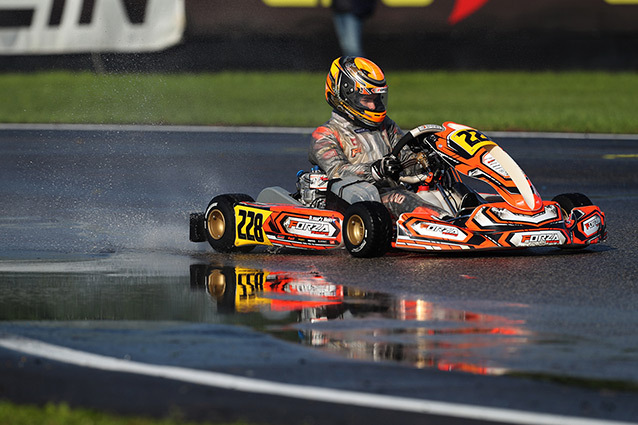 The sprint to the line of the WSK Open Cup is now underway: the International Karting Series will name its winners on Sunday, November 10th at the end of the tough challenge of the second round. The second and decisive weekend kicked off today with qualifying practice and the initial heats at the Settelaghi Kart Circuit in Castelletto di Branduzzo (PV). The provisional leaders set the benchmark for all the drivers present that are split into the three entitled categories: the Brit Taylor Barnard (KR-Iame-Bridgestone) is leading the pack in class OK, the Italian Andrea Kimi Antonelli (KR-Iame-Vega) in OK Junior and the Bulgarian Nikola Tsolov (Parolin-TM-Vega) in 60 Mini. This exciting challenge will take place on the 1256 meters of the circuit located in between the lakes of the Oltrepo Pavese region. The final qualifying heats will take place tomorrow, while the Grand Finale will take place on Sunday with Prefinals and Finals.

Van’t Hoff charging in class OK.
The attack to the leader of OK Taylor Barnard has already been moved, courtesy of the Dutch Dilano Van’t Hoff (in the photo on top, on Exprit-TM-Bridgestone), who went quickest today in 55″375s. He was followed by the Finn Matias Salonen (KR-Iame). Van’t Hoff repeated his performance in the heats, winning the first from Barnard, as the latter bounced back from the ninth place of qualifying practice. The second race went the Brit Joseph Turney’s ways (Tony Kart-Vortex), who led his Italian team-mate Lorenzo Travisanutto. 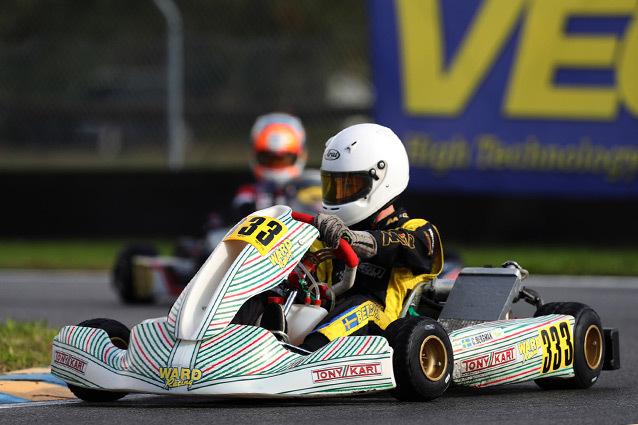 Bergman launched the challenge in OK Junior.
Antonelli has been challenged by the Swede Calle Bergman (above, Tony Kart-Vortex-Vega) in class OK-Junior. The latter posted the quickest time in qualifying completing his best loop in 1’02″983s and was followed by the classification leader from Italy. The Dutch Robert De Haan (Energy-TM) slid in winning the first qualifying heat leading the Czech Igor Cepil (KR-Iame). Antonelli bounced back straight away though and won the second heat from the Norwegian Martinius Stenshorne (KR-Iame). 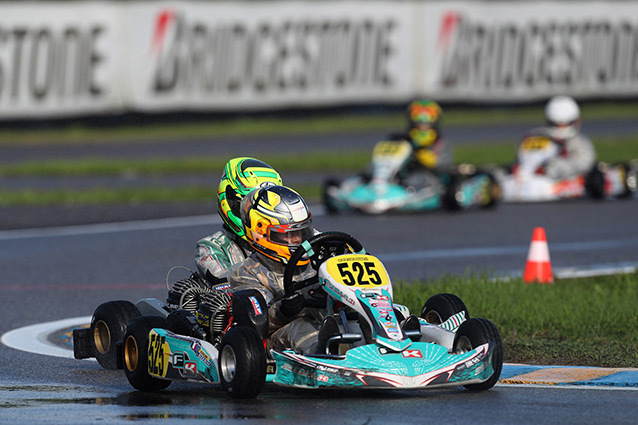 Iglesias trying to pull away in 60 Mini.
The French Louis Iglesias (above, IPK-TM-Vega) challenged the 60 Mini’s leader Tsolov, setting the benchmark time in qualifying in 57″860s. He was followed by the Chinese Shimo Zhang (Parolin-TM). Ukraine’s Oleksander Bondarev (Tony Kart-TM) won the first of the heats leading the Austrian Kiano Blum (Parolin-TM). Tsolov came back to the fore in the second heat, when he took the win from the Thai Enzo Tarnvainchkul (both on Parolin-TM).

The duels in live streaming, a treat not to be missed.
The battles on track can be followed by the welcoming grandstand of the circuit, that provides a good visual on the whole circuit. The spectacle is granted also far from the circuit though, as WSK Promotion’s video production will cover all the racing action of the closing day. The usual live streaming coverage will take place on Sunday, November 10th to bring the racing action to the devices of all fans through the official website wsk.it and WSK Facebook’s fan page. The appointment is for 10:20 with Prefinals and will then continue with the Finals starting in the afternoon at 14:00.