Home News Bradshaw, David, Hays and Mettetal in Winfield Volant Finals Four podiums including a victory for Winfield at Lédenon

The American anthem echoed Lédenon, as more competitive in each race, Nicky Hays was indisputably the best performer of the fourth round of the 2019 FIA French F4 Championship. With two podiums, including a magnificent victory, the young American has returned to the leading group in the provisional classification. 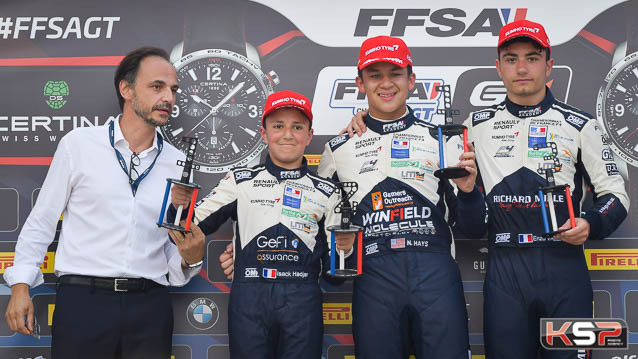 “Nicky impressed us in his handling of the races and his superb incisive manoeuvres in which he was also very clean,” said Cyrille Sauvage, the Winfield Racing School coach. “Each time, his starts were decisive, he gained places in all three races at crucial moments of the event. Of all the drivers, he was the most effective and the most combative on this difficult circuit of Lédenon over the whole of the meeting.“

“Race 1 was really good,” Nicky continued. “I was able to get on the third step of the podium after starting from 5th place. I also gained a position in Race 2 which was played with an inverted grid. Race 3 was even better. My start was perfect, I tried several passes in the first corners. I was already 2nd on the first lap and I was able to pass the leader on the second lap and then widen the gap.“

Throughout the race, Nicky Hays was clearly the fastest on the track, as evidenced by his fastest lap in the race and his really significant lead of 15 seconds at the finish! “I really wanted to show my performance this season and I thank all the people who support me and especially the Winfield Racing School. I came back to 3rd in the Championship and I intend to continue this momentum to fight for the title at the end of the season.“

The two other F4 Mygale-Renault cars with Winfield colours were also able to make progress. Jules Mettetal set the second fastest lap in Race 3, but the Winfield Volant winner’s weekend was marred by a tough Qualifying session and an incident with another driver in Race 1. Although fast, Jules knows he still needs to work at his racing to become a regular contender for the podium.

Isack Hadjar, winners of the Winfield Volant last February, confirmed his position as leader in the French F4 Junior Championship. His progression continues on an ascending curve for its young age. At the age of 14, Isack Hadjar completed his performance with a remarkable comeback from 7th to 2nd place in Race 3, with a brilliant sense of attack. With the points scored in the other two races, he is currently very close to 3rd place overall.

“There are still three races left and I hope the Winfield drivers will finish the season in style. The outcome of the Championship is more than ever uncertain and we remain confident in the abilities of Jules, Nicky and Isack to give us new successes and podiums,” concluded Anne-Charlotte Remy, General Manager of the Winfield Racing School.