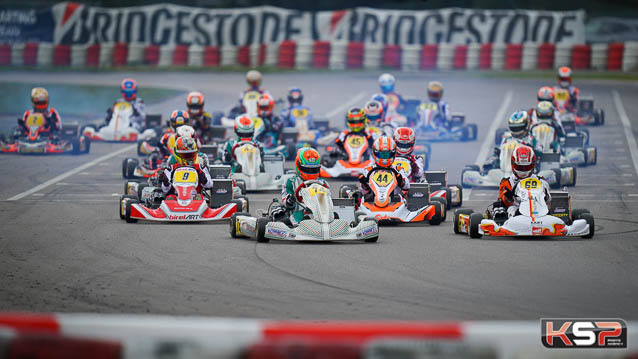 The weather was cloudy at the start of the third KZ heat at Wackersdorf, but there was still no rain. Matteo Vigano (Tony Kart / Vortex) stayed ahead of Jorrit Pex (KR / TM) while Anthony Abbasse (Sodi / TM) attempted several attacks on Alex Irlando (Birel ART / TM), but to no avail. Lorenzo Camplese (Tony Kart / Vortex) and Simo Puhakka (Tony Kart / Vortex) passed the Frenchman. Jérémy Iglesiais (Formula K / Iame) spun and Pedro Hiltbrand (CRG / Iame) had retired due to a technical problem. Abbasse was 6th in front of Bas Lammers (Sodi / TM), Adrien Renaudin (Sodi / TM) was 14th. Vigano won with Pex, closely followed by Camplese and Puhakka. Holder of the fastest lap, Abbasse remained 6th in front of Lammers and Marco Ardigo. Renaudin finished in 13th place before ending up 17th because of a penalty.

Jorrit Pex finished at the front of the heats of the European Championship – KZ ahead of Abbasse and Vigano, then Irlando 4th and Camplese 5th. Ardigo was 7th, Lammers 9th and Renaudin 10th.

Superb win for Skaras in KZ2 at Wackersdorf