The only single-seater class racing at the traditional Easter Cups, the FFSA Academy F4-FIA has produced a magnificent show on the 3636 metres of the Nogaro circuit. Winner of his duel with Enzo Valente, Hadrien David won the Race 1 with panache. 1st on the starting grid of Race 2, according to the principle of the reverse grid, Ugo Gazil beautifully resisted Reshad De Gerus, already 3rd in the morning, to win the race. Gillian Henrion completed the second podium of the 2019 French Championship, which is already forecasted to be a vintage year. Isack Hadjar and Victor Bernier shared the two victories of the day in Junior. 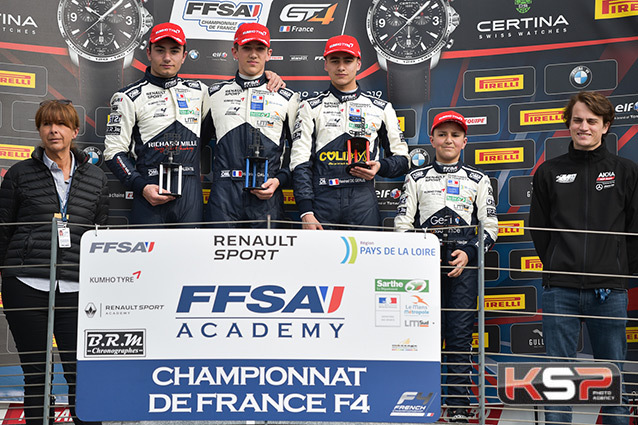 After taking pole position on Saturday, Hadrien David had to make a big attacking run to recover his 1st place, which had been stolen by Enzo Valente at the start. “I felt I was faster than Enzo,” Hadrien said after the finish. “By putting pressure on him, I pushed him to make his braking later and I ended up passing him at the exit of a bend while he was trying to protect himself.” After this splendid manoeuvre, which took place after having achieved the lap record, Hadrien was heading for victory in Race 1 in front of Valente.

Due to a slight skid when the lights went out, Jules Mettetal lost three positions on the first lap at the expense of Reshad De Gerus, Evan Spenle and Nicky Hays. Although Spenle was to give up with regret, De Gerus completed the podium in front of the fast American and Mettetal. A short distance away, the South African Stuart White then Gillian Henrion ranked 6th and 7th.

Despite the progress by Victor Bernier, Isack Hadjar confirmed his encouraging Qualifying performance and triumphed in the Juniors.

As the French F4 Championship rules require, the top 10 in Race 1 decides the starting order of Race 2, but in reverse. Ugo Gazil therefore recovered the best place on the starting grid and exploited this advantage perfectly. “It was an intense race because I first had to watch Victor Bernier in my mirrors, and then I saw Reshad De Gerus come back after the halfway point,” said Ugo. “A few drops of rain started to fall and made the track a bit slippery. It was really difficult to contain Reshad, we even touched, but I was able to keep the lead of the race. I was disappointed to miss my Qualifying session and the goal was really to get back on track in Race 2. I’m very happy I won.“

Already 3rd the day before, De Gerus appreciated this new podium. “It was a very good day overall. In the morning, I was missing some performance so couldn’t worry David and Valente. With the engineers, we pinpointed the two places where I could still improve and it paid off, as evidenced by this rise from 8th to 2nd place. I scored significant points for the Championship, which is the most important thing, because the season will be long,” admitted the driver from Reunion Island, who is on his second season in F4 and is clearly aiming for the title.

Behind, nothing was given away and there were numerous contenders aiming for the 3rd step of the podium. Gillian Henrion ended up passing Victor Bernier to secure the last place in the top three. Brilliant on the slippery track in the final laps, Hadrien David stood out with another fastest time in the race and a superb return to 4th place just ahead of the American Nicky Hays. 6th overall, Victor Bernier had the satisfaction of taking the Junior victory.

Race 3 will take place on Monday, 22nd April at 12:05 pm, with a starting grid defined according to the second best time of each driver set during the Qualifying Practice session.