On the Adria Karting Raceway, the third and final round of the WSK Final Cup took place in rainy weather. Despite the poor grip conditions, the three drivers of the Rosberg Young Drivers Academy achieved well on a tricky track. Dominating OK throughout the meeting, Lorenzo Travisanutto won the series despite a retirement two laps from the finish. Taylor Barnard kept his cool in OK-Junior and ensured his victory in the Championship with a 4th place finish, just ahead of his young team-mate Andrea Kimi Antonelli, whose potential is confirmed race after race. With two titles to celebrate the end of its first season, Rosberg Racing has fully achieved its 2018 goal. 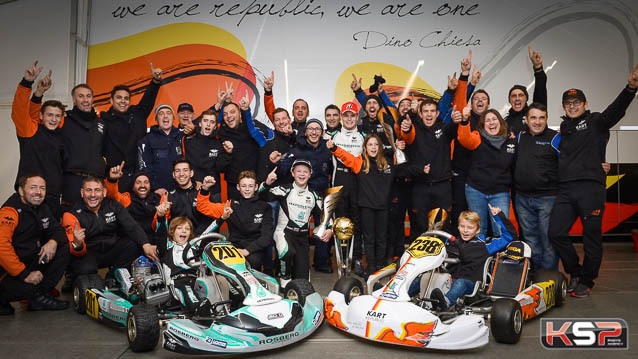 Travisanutto at the peak of his skills

The reigning FIA Karting World Champion was keen to prove that he had complete control of his excellent Parilla-powered KR chassis. He won three great victories with fastest laps in the Qualifying Heats despite some tough opponents. With a steely mind, Lorenzo managed his races perfectly and was unstoppable in the rain. The scenario was repeated during Prefinal A where he finished masterfully as winner with another fastest time. He was again fastest in the Final, this time widening the gap far ahead of his rivals. However a technical incident deprived him again of a well deserved victory, while he had two laps remaining and his lead was 5″. Fortunately, the points scored previously allowed him to win the WSK Final Cup in OK. The demonstration was more than convincing for the driver, but also for the Rosberg Young Drivers Academy and its partners Petronas, Arexons and KR Motorsport.

Great success for Barnard
Disappointed with his previous result at Castelletto, Taylor Barnard did everything to erase that bad memory. From his 6th place in the Qualifying session, the young Briton made some great runs, winning twice and taking the lead of the OK-Junior category in the intermediate classification. He confirmed his potential by winning Prefinal A, while taking the fastest time. Delayed on the outside line at the start of the Final, Taylor finished strongly in 4th place, a result more than enough to ensure him victory in the WSK Final Cup standings with a lead of more than 40 points.

Competing in his third OK-Junior race on a wet track is not an easy task. Yet Andrea Kimi Antonelli was up for it the whole weekend of Adria. He began by regaining five places during the heats after his 12th place finishes. He continued with a 3rd position in Prefinal A and raced a superb Final which ended in 5th place in the wheels of his team-mate. He brilliantly finished his first Junior Championship in the top five of a category with more than 100 drivers, a very encouraging performance for the rest of his career.

In just a few months, the Rosberg Racing has marked its territory in karting’s highest level. After Travisanutto’s World title in OK, Travisanutto’s and Barnard’s double success in the WSK Final Cup mark a very positive end to the 2018 season.

“For the Rosberg Young Drivers Academy, Petronas, Arexons and Kart Republic, the year could not be better,” said team manager Dino Chiesa. “The performance of our KR / Parilla karts allows us to give our drivers every opportunity and they have used it to reveal their talents. Our goal has been achieved, especially as the youngster Antonelli impressed in his first appearances in Junior. These successes encourage us to expand our action with the youngest members in 60 Mini from 2019“.

Barnard and Antonelli close to the podium

First win for Antonelli with the Rosberg Racing Academy

Barnard and Antonelli close to the podium