At Nogaro, the final race of the meeting confirmed the particularly high level of the 2018 French F4 Championship. After the Belgian Ugo de Wilde and the Monegasque Arthur Leclerc, the Frenchman Adam Eteki opened his portfolio of victories, dominating Monday’s Race 3, organised as part of the famous Easter Cups. De Wilde and Eteki are tied for first place in the Championship. Here to encourage the young hopefuls of motor sport, the Formula 1 driver Charles Leclerc did not miss any of the spectacle, before presenting the trophies on the podium. 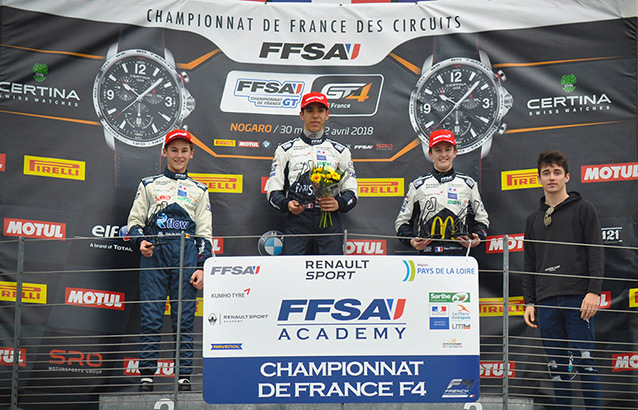 The 19 drivers entered in 2018 embarked on Race 3 again on a perfectly dry track. The analysis of data acquisition, video viewing and numerous debriefings with the FFSA Academy engineers allowed everyone to make progress. The pack remained even tighter than the day before, with intense duels at all levels.

Decided by the second best lap of each driver in the Qualifying session on Saturday, the starting grid saw Adam Eteki take pole position with Theo Pourchaire at his side. At the first corner, Eteki narrowly kept his lead. Stuck outside at the start of the second corner, Pourchaire could not stop De Wilde from overtaking him.

Tight positions in the lead quartet

Behind the leading trio, Caio Collet quickly started to harass Ulysses De Pauw and found the opening on the sixth of 14 laps. The Brazilian then kept up a very fast pace, to the point of returning to the leaders neck and neck. Very strong, Eteki continued his effort in the lead. “I saw that De Wilde was close in my mirrors, which motivated me to improve my lap times even more and to protect myself from an attack. It’s great to be on the top of the podium at the opening of the season,” commented the winner.

However, his rival also maintained a steady pace, especially as at the same time he had to contain the very pressing Theo Pourchaire. “I pushed to the end to recover the place lost at the start, but Ugo did not make a mistake and I did not manage to overtake him,” said Theo. “However, I am doing a good job in the Championship by confirming my place as top Junior.“

De Wilde and Eteki side by side at the championship

At the foot of the podium, Collet consoled himself with the fastest time in the race. On the last lap, Arthur Leclerc surprised De Pauw to steal 5th position. Unlucky since the start of the meeting, Stuart White had a great attacking run to return from 11th to 7th place. Behind, Reshad De Gerus spared no effort to contain a compact pack consisting of Theo Nouet, Shihab Al Habsi, O’Neill Muth, Esteban Muth, Gavin Aimable and Baptiste Moulin. Going well since his 7th place on the grid, Pierre-Louis Chovet unfortunately couldn’t take advantage of the start after engine cuts.

At the end of this first meeting, De Wilde and Eteki emerge jointly at the top of provisional rankings of the 2018 French F4 Championship, but only six ahead of Pourchaire and eight from Collet. As one might expect, the hierarchy is already very undecided, putting an extremely competitive season in prospect.

“This first race has undoubtedly met our expectations, which arose after seeing this high quality entry list,” said Christophe Lollier, the National Technical Director. “The drivers we saw recently on the podiums of international karting events are today at the forefront in F4, which is rewarding for the FFSA Academy and our French Championship. Many of them were highlighted during the three days, and the podiums were different at each of the three races, which promises a great show this year. I would like to thank Charles Leclerc for his presence on the podium alongside our young prodigies.”

De Wilde and Leclerc are the opening winners of 2018 F4