Franco-Belgian duel in prospect at Nogaro?

Ugo De Wilde secured a magnificent pole position for the inaugural round of the 2018 French F4 Championship, organised by the FFSA Academy as part of the Easter Cups at Nogaro. On a drying track, the 15-year-old Belgian had to wait for the last lap of the Qualifying session on Saturday to set the fastest lap ahead of his compatriot Ulysse De Pauw. Although the race on Sunday morning will feature a 100% Belgian front row, Monday will be 100% French with Adam Eteki and Theo Pourchaire, after taking into account the second fastest lap for each driver. 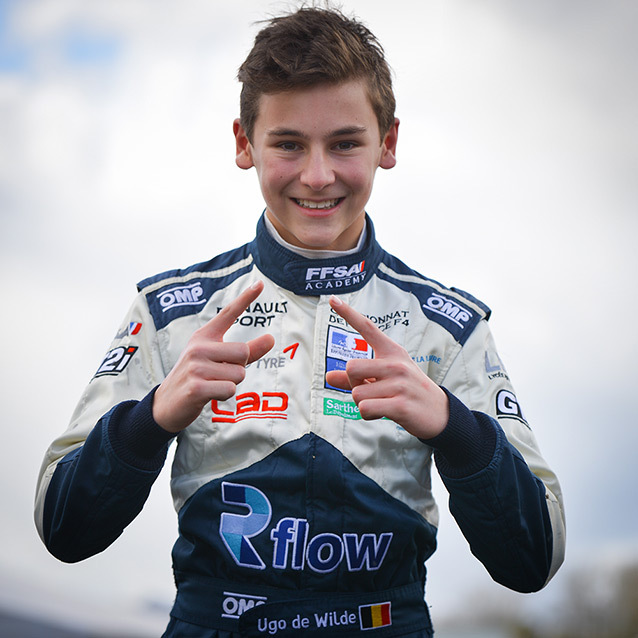 A particularly strong 2018 French F4 Championship has opened at Nogaro, as Christophe Lollier, National Technical Director, immediately acknowledged. “This first Qualifying session has set the tone for the season,” he said. “In 2018 the FFSA Academy has gathered a field of high quality drivers. I think it will be the most prestigious F4 championship to be held in Europe this season. Many drivers who have raced at the highest level of international karting have chosen our French Championship, it’s a sign”.

On track, the new Mygale F4 cars, built to FIA standards, and equipped with Kumho tyres, have been very satisfactory. No technical incidents disrupted the Qualifying session, proof of the meticulous preparation by the entire FFSA Academy team.

De Wilde on pole in difficult conditions
The drivers had to deal with a Saturday disturbed by changeable weather. In the morning, Adam Eteki was the fastest in free practice on a wet track. The 19 academicians kept the rain tyres on for the 25-minute afternoon Qualifying session, but the track was to dry up as the laps progressed. A small run out by a competitor caused the Race Director to put out the red flag. Everything was decided a few minutes later during the “restart”, with lap times that continued to improve until the chequered flag.

Long leader, Théo Pourchaire was overtaken at the end by Ugo De Wilde, Ulysse De Pauw and Adam Eteki. “I took a few laps to find my bearings, then I managed to use the driest parts of the track to be very fast at the end of the session,” said Ugo De Wilde, who is racing in his second French F4 season.

Good work by Adam Eteki
Delighted to make the front row for his great debut in single-seaters, Ulysse De Pauw gained nearly seven tenths between his last two timed laps! “I knew it was going to be decided at the end of the session and I really gave everything to get the most out of the grip,” explained the RACB Volant winner.

“After my fastest time in the morning, I was hoping to achieve pole position overall, especially as I was leading before the red flag. But overall it was a good qualifier, as I’m going to start 3rd on Sunday morning and 1st for Monday’s race. The weather looks better for both events and it may be different in the dry, but I feel ready to take on the challenge,” said Adam Eteki.

Ranked 4th and disappointed at not having been able to improve his time in the last minutes, Théo Pourchaire nevertheless won his place on the front row for the last race of the meeting, which is determined by the second best laps of each driver. With an ambush by the Brazilian Caio Collet, the Monegasque Arthur Leclerc, the younger brother of Charles, Pierre-Louis Chovet or Reshad De Gerus from Reunion Island, the races promise pitched battles …

Starting grid for the three races
Race 1 (Sunday, 1st April at 9:15am): according to the fastest time by each driver in the Qualifying session

Race 2 (Sunday 1st April at 4:25pm): according to the classification of Race 1, in reverse order for the top 10

Race 3 (Monday, 2nd April at 11:35am): according to the 2nd fastest time by each driver in the Qualifying session

De Wilde and Leclerc are the opening winners of 2018 F4