Home News International The second round of WSK in Lonato: a chance to bounce back

The second round of WSK in Lonato: a chance to bounce back 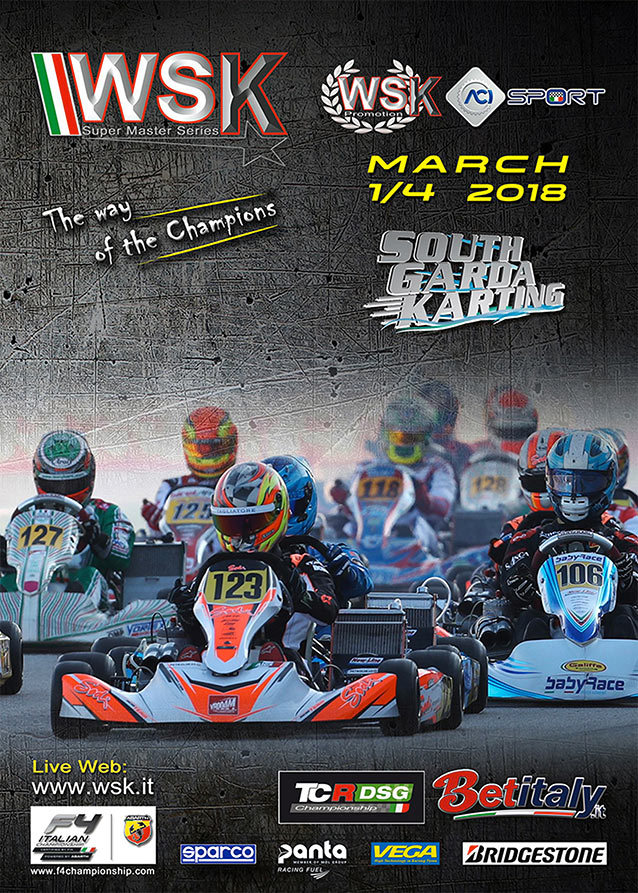 More than 300 drivers are ready to challenge each other in the second round of the WSK Super Master Series, fighting for the early classification leads of the season: next weekend, from March 1st to 4th, the South Garda Karting circuit in Lonato (Brescia, Italy) will host an event that will provide a lot of drivers with the chance to bounce back one month after the double event that kicked off international karting in Adria. The points awarded in Adria’s qualifying heats, Prefinals and Finals launched the drivers on the top step of the podium to the classification lead. By the look of the classifications, several changes on top are quite likely in the categories KZ2, OK, OK Junior and 60 Mini.

The fights for the classification lead in the second round.
Following the cold days expected for the first half of the week, the weather in Lonato is expected to improve, with higher temperatures on Saturday and Sunday. The German Hannes Janker (KR-Parilla-Bridgestone) will have to defend his classification lead in OK, as he currently stands on top at 89 points, leading the Italian Lorenzo Travisanutto (KR-Parilla) at 60 points, and the Spanish driver David Vidales (Tony Kart-Vortex), who is third at 45. In KZ2, the Italian Alex Irlando is on top at 77 points, while the French Adrien Renaudin (both on Sodi Kart-TM-Bridgestone) is second at 59. The third place is currently occupied by the Italian Leonardo Lorandi (Tony Kart-Vortex) who totaled 47 points so far. The OK Junior classification is led by the Russian Kirill Smal (Tony Kart-Vortex-Vega), while the Italian Gabriele Minì (Parolin-Parilla) is second. The two rivals respectively hauled 87 and 60 points in Adria and lead the Estonian Paul Aron (FA Kart-Vortex), who scored 38 points. The Norwegian driver Martinius Stenshorne (Parolin-TM-Vega) leads 60 Mini with 80 points and is followed by the Polish Tymoteusz Kucharczyk (Parolin-TM), who scored 48 points, and the Italian Francesco Pulito (IP Karting-TM), who stands third at 42 points. Classification changes in Lonato will be favoured by the second step in the increasing scoring system specified by WSK regulations.

Racing action from Lonato in live streaming.
In order not to miss the exciting fights for the classification lead in Lonato, the appointment with all fans is the usual of all WSK racing weekends. The live streaming feed will cover Prefinals and Finals on Sunday March 4th from the official web page wsk.it.