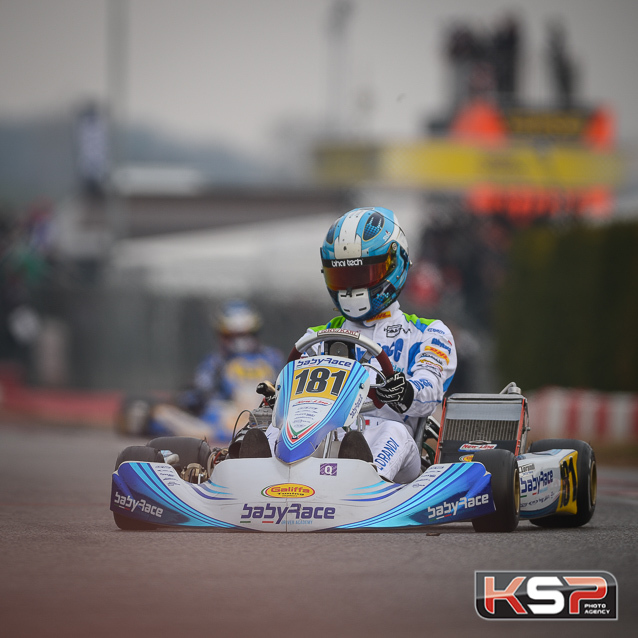 At Lonato, a very light rain disrupted the last three KZ2 Qualifying Heats on Saturday, February 17, when the battle was already very tight among the 94 participants of the Winter Cup. The extreme closeness in performance of these powerful machines as well as the standard of the top competitors and the many penalties were the cause here. There are two races to go on Sunday morning for groups B / E and D / F, before the decisive Super Heats for access to the Final. The unofficial intermediate ranking from Kartcom gives an idea of ??the situation before the end of the qualifying phase.

Already the poleman from Qualifying, Leonardo Lorandi (Tony Kart / TM) is sure to stay ahead at the end of the heats, as he is followed by several drivers who have not finished their Qualifying programme. Fabian Federer (CRG / TM), Ben Hanley (Drago Corse / TM), Anthony Abbasse (Sodi / TM), Giuseppe Palomba (Intrepid / TM), Francesco Celenta (Praga / TM), Jorrit Pex (CRG / TM) and Pierre Loubère (Praga / TM) are however in a good position. Riccardo Longhi (Birel ART / TM) has been very fast, but penalised for one of his starts, and should go back up the rankings not far from the top five. Adrien Renaudin (Sodi / TM) also completed a beautiful run, followed at a distance by Nicolas Gonzales (Maranello / TM), while Jérémy Iglesias (Formula K / TM) can expect to rise after his last great races.