The 2017 CIK-FIA European Junior Championship took place over five Competitions for Drivers in the OK-Junior category aged between 12 and 14 during the year. Although the engine had already proven itself in 2016, the rejuvenation of the field caused a new experience this season, as did the new format eliminating the Prefinals between the Qualifying Heats and Finals. 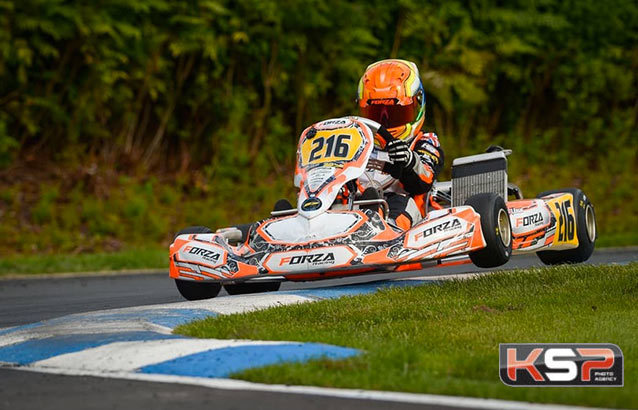 Once again, the youngest Drivers confronted their more experienced opponents without difficulty, as the hierarchy progressively took shape over the course of the Races. The circuits selected and the not always favourable weather increased the difficulty of the Championship. The last Competition in Sweden confirmed the revelation of a promising young talent with the crowning of the Briton Jonny Edgar against his compatriot Harry Thompson and the Australian Jack Doohan, who had made impressive progress in 2017.

Edgar already at the top of the ranking at Sarno (ITA)

Victory for Michelotto at Oviedo (ESP)

On the difficult route of the Fernando Alonso circuit in Spain, the races were particularly bitter. Edgar again won the Final on the track, after an exceptional comeback, but lost his victory because of a badly positioned front fairing penalty. Very good also, Mattia Michelotto (Zanardi / Parilla / Vega) won against Christopher Lulham (Tony Kart / Parilla / Vega) and Thompson, who took the lead of the Championship.

Hadrien David of France (Zanardi / Parilla / Vega) was at the front of the Qualifying Heats on his home turf, followed by Edgar and Muth. The Final kept this top three, but in a different order with Muth’s victory over Edgar and David. Thompson, who had to retire, gave up control of the provisional classification to Edgar and Muth.

Edgar takes off at Alahärmä (FIN)

Jack Doohan (FA Kart / Vortex / Vega), however, dominated the start of the Finnish Competition ahead of Edgar and Thompson in the title fight. Edgar showed his determination by securing his decisive victory a few laps from the finish. Russia’s Ilya Morozov (Tony Kart / Vortex / Vega) took a fine 2nd place ahead of Thompson and Doohan. Edgar strengthened his leadership in the Championship against Thompson.

Revenge of Doohan and title for Edgar in Kristianstad (SWE)

Doohan maintained his grip in Sweden until a tricky Final on a slippery track after rain. He scored a nice win while Edgar fell from 2nd to 4th because of a penalty. Thompson was on the podium with the German Hugo Sasse (CRG / Parilla / Vega).