Pulito and Stenshorne win the 60 Mini Prefinals at Adria

The sun warmed the Adria track for the final stages of the WSK Super Master Series, but the tarmac was still slippery when the 60 Mini entered the scene.

Alan Czyz (Parolin / TM) dislodged leader Tymoteusz Kucharczyk (Parolin / TM) from 1st place with Francesco Pulito (IP Karting / TM), Coskun Ifran (Tony Kart / TM) and Federico Rossi (CRG / TM) in his wake from the fourth lap of Prefinal A, while Andrea Kimi Antonelli (Energy / TM), last on the first lap was trying to move up. Pulito then settled in the lead and won the race well in front of Rossi and Czyz. Kucharczyk finished 5th, Ean Eyckmans (Energy / TM) 10th. Antonelli could not qualify, nor could Jimmy Helias (Tony Kart / Vortex), delayed in the battle on the second lap. 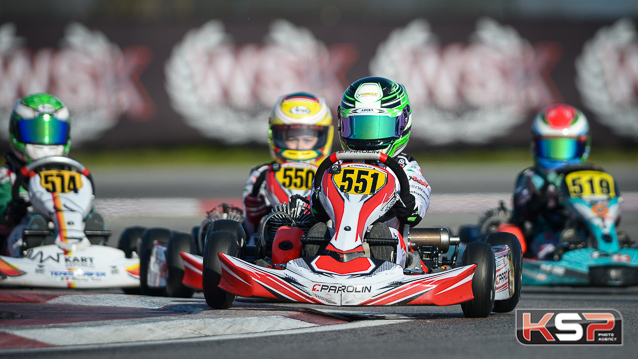 The slick tires were mounted for Prefinal B, which caused some incidents in the pack on the first lap. Martinius Stenshorne (Parolin / TM) returned quickly and fought against Igor Cepil (Parolin / TM) before winning, while Brando Badoer (Parolin / TM) was finally ahead of Joel Bergstrom (IP Karting / TM) on the line for 3rd position. Rocco Mazzola (Evokart / TM) was 5th, and Andrea Filaferro (Birel ART / TM), fighting in the leading group at the start of the race, finished 10th.