The track of Adria was drying quickly in the sun, with the slick tyres on for the first time of the weekend. The OK-Juniors were fighting for their qualification in the Final. 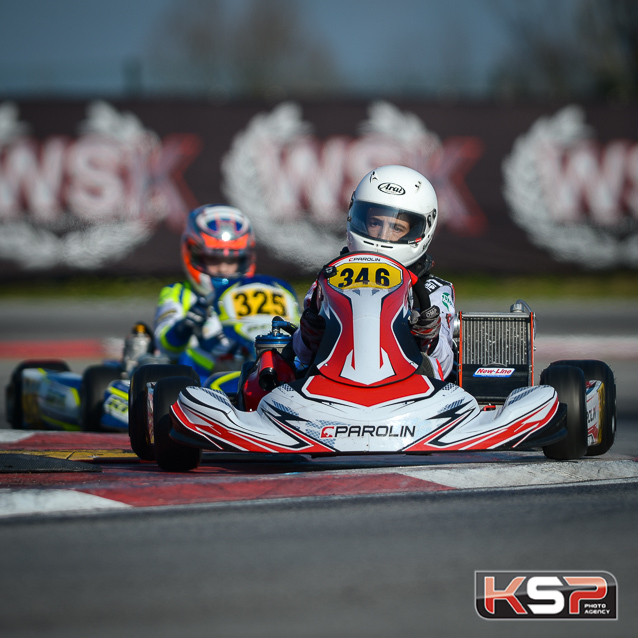 Harry Thompson (FA Kart / Vortex) and Zak O’Sullivan (FA Kart / Vortex) immediately took the lead over Dario Isidoro Vezzaro (Tony Kart / LKE) in Prefinal A. Dilano Van T Hoff (Exprit / TM) was delayed, Evann Mallet (Kosmic / Parilla) spun at the first hairpin, Dino Beganovic (Tony Kart / Vortex) fell to the back of the field. O’Sullivan escaped, Thompson was harpooned by Vezzaro and retired. Gabriele Mini (Parolin / Parilla) was quick to get back to the leader and took the lead before half-distance, while Luca Griggs (Exprit / Vortex) was 2nd in front of Vezzaro, later penalised down to 15th, then Hugo Sasse (KR / Parilla). Marcus Amand (KR / Parilla) was fighting at the top 10. Mini won the race with a comfortable lead of 3.8′ ahead of Griggs and O’Sullivan, Vezzaro and Sasse. Amand crossed the line in 10th place, but finished 12th after a 3” spoiler penalty, Van T Hoff finished 14th and Mallet took 17th.

Kirill Smal (Tony Kart / Vortex) got the better of Paul Aron (FA Kart / Vortex) when the lights went out for Prefinal B, while we watched the very good start from Taylor Barnard (KR / Parilla). Hadrien David (Kosmic / Vortex) conceded some places in the leading group. Sami Meguetounif (Formula K / TM) climbed to 10th position before going off the track and giving up on lap 5. Victor Bernier (Kosmic / Parilla) followed Loris Cabirou for the top 10, while Macé Capietto (KR / Parilla) was back on track after a difficult start to the race. Meanwhile, Barnard took 2nd place ahead of Gabriel Bortoleto (CRG / TM), Aron and Luca Bosco (Tony Kart / TM), Smal led the way until the end of the race despite the return of Barnard, Bortoleto ended up 3rd, Aron 4th, Bosco 5th and David 7th. Cabirou had been 10th but finished 12th just behind Bernier.