WSK Super Master: Abbasse takes off in the KZ2 heats 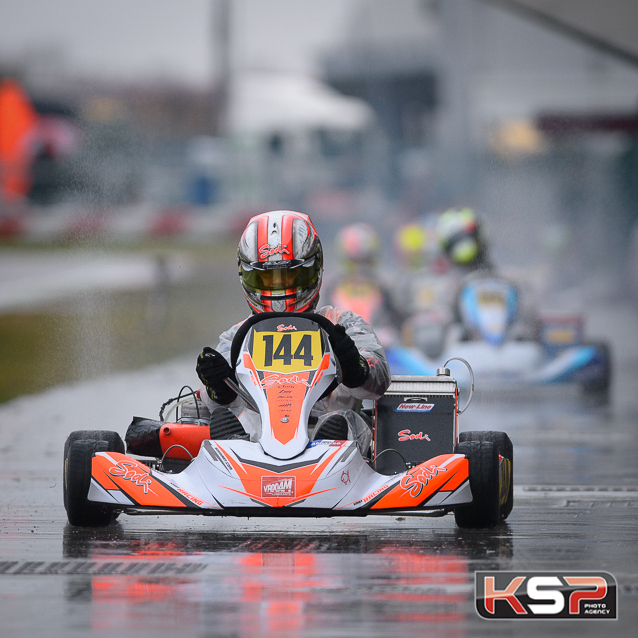 The Adria track was constantly wet to varying degrees, during the three KZ2 Qualifying Heats of the WSK Super Master Series. Starting from 11th place in Qualifying, Anthony Abbasse (Sodi / TM) did not give any quarter by winning all three races. He had something of a hard time with Adrien Renaudin (Sodi / TM), leader at the beginning of the first before imposing himself without any possible argument. Twice 2nd, Renaudin earned his 2nd place on Saturday night, while Leonardo Lorandi (Tony Kart / Vortex) returned to 3rd position ahead of Alex Irlando (Sodi / TM), from 18th to 4th. The scores were then significantly higher according to the misadventures of the other drivers, Matteo Vigano (Tony Kart / Vortex) managing to rise from 24th to 5th position. Like Riccardo Longhi (Birel ART / TM), Tom Leuillet (Sodi / TM) was struggling in the last two and was only 17th behind the Italian, but in front of Simo Puhakka (Tony Kart / Vortex), a victim of a retirement. Yohan Soguel (Luxor / LKE) in 21st is ahead of Oliver Rasmussen (Kosmic / Vortex). In 26th, Jean Nomblot (Sodi / TM) was starting to join the pace before dropping out in the last. Also a beginner in KZ2, Hugo Arnaud (Sodi / TM) is ranked 28th and Emilien Denner (Kali Kart / TM) 31st.