Adria: Vezzaro keeps the lead after the OK-Junior heats 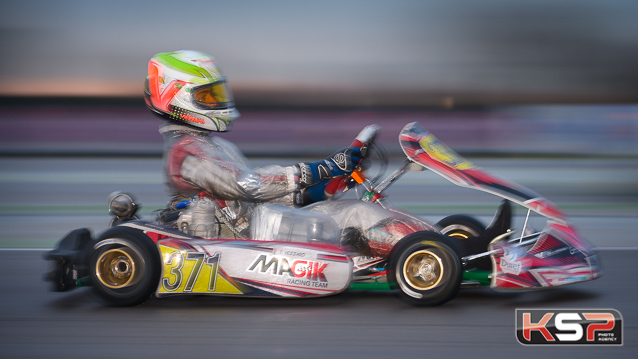 The task was not easy for the OK-Junior drivers because of the cold, and also the rain that drenched the Qualifying Heats of the WSK Super Master Series at Adria. Argentine poleman Dario Isidoro Vezzaro (Tony Kart / LKE) did not hesitate in winning four consecutive victories in four races, creating a surprise in the category. Paul Aron (FA Kart / Vortex) was a solid 2nd ahead of the return from 20th to 3rd position for Harry Thompson (FA Kart / Vortex), his teammate at the RFM team. Kirill Smal (Tony Kart / Vortex) and Dilano Van T Hoff (Exprit / TM) completed the top five while Hadrien David (Kosmic / Vortex) secured a solid 6th place ahead of Zak O’Sullivan (FA Kart / Vortex). Evann Mallet (Kosmic / Parilla) brilliantly came back from 29th to 9th position, while Gabriele Mini (Parolin / Parilla) dropped to 13th because of his retirement in the last heat. Similarly, Luca Bosco (Tony Kart / TM) was 18th after an incident at the end of the day. Sami Meguetounif (Formula K / TM) started out well in the first, then moved up the field with good performances until he was 22nd, just behind Thomas Dijkstra (Birel ART / TM). In 28th position, Victor Bernier (Kosmic / Parilla) was on an upward slope after his catastrophic 80th in Qualifying. A positive start for Loris Cabirou (Energy / TM), sadly impeded by his last run which pushed him back to 30th position. Macéo Capietto (KR / Parilla) had two good races out of four for his Junior debut and was 44th. Marcus Amand (KR / Parilla) was 57th after a similar run.