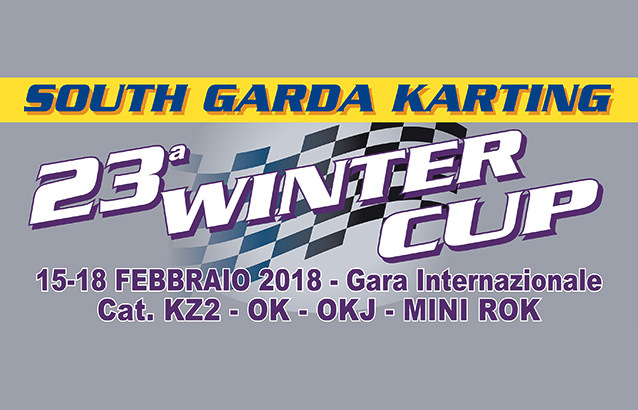 Heading a new record
The 23rd edition of the Winter Cup scheduled for next February 15-18 is bound to set a new participation record, as it is fully packed in all categories: Mini Rok, OK-Junior, OK and KZ2. This year’s 300 drivers (still provisional figure) is certainly going to set another important record for the Winter Cup.

On track also Montoya, Trulli and Alesi’s sons
All the strongest drivers in the world will be present, as the sons of several motorsport champions like Sebastian Montoja, Enzo Trulli and Giuliano Alesi. Alongside them, the rising stars of motorsport that decided to challenge each other again on karts, like Antonio Fuoco, the brothers Alessio and Leonardo Lorandi, and Callum Ilott.

A lot of big names at the start
Among the big names in the highest categories, two times World Champion Paolo De Conto and World Champion Jorrit Pex will be present in KZ with CRG, the winner of the KZ2 International Super Cup Alex Irlando will defend Sodikart’s colors, while Francesco Celenta Praga’s, Anthony Abbasse Sodikart’s, Jeremy Iglesias Formula K’s and Ben Hanley Croc’s. Lorenzo Camplese will compete for Maranello, Simo Puhakka for Tony Kart, Riccardo Longhi for Birel, Bas Lammers for the new team Lion, while Tom Joyner will be present in OK with Sodikart, and the new OK-Junior World Champion Dexter Patterson with Forza Racing, 2016 World Champion Pedro Hiltbrand will race for CRG and Niklas Nielsen for KSM Schumacher Racing Team. Due to the high number of requests for class KZ – that will contest the European Championship in Lonato on July 15th, the participation has been extended to 108 drivers. OK-Junior is also going to be quite crowded with about 90 drivers, while Mini Rok currently counts 70 entered drivers.

Entry procedures are available at www.southgardakarting.it.
All categories will employ Bridgestone tyres, with tyres check done through barcode and scanner. The fuel used is Tamoil 100% octanes.