A veritable success story, the Belgian Karting Championship Series will already reach it’s epilogue on this third weekend of August . Whereas all the titles are still to be decided in each of the seven categories , nearly 200 drivers from the four corners of Europe and even further afield will come face to face on the famous Limbourg track . There can be no doubt , to enable this 2017 campaign to conclude like a huge sporting fireworks, the Organization has gone to great lengths to put on a great spread !

After two stages at Mariembourg and Francorchamps ,both as well disputed as they were successful ,the 2017 Belgian Karting Championship will conclude this weekend at the International Circuit of Genk. In the region of Limbourg, almost 200 drivers – something never seen in our country ! – coming from 12 different nations will cross swords within the seven categories supervised by the RACB, the KNAF (the Dutch Federation for automobile sport) and IAME Belgium. The epilogue of this 2017 campaign will be more than ever worth it’s weight in gold as no national crown has yet been decided before this final rendezvous ! In this extremely competitive context , and following some snags observed at Francorchamps, the organizers wish to remind at the same time that they have reinforced their observation team to ensure the respect of the sporting and human values to which they adhere. Somet hing which should calm the fervour of some and ensure a great spectacle tinted by fair play during all the weekend.

X30 Super : De Pauw on the heels of Collignon
If not the biggest field in terms of quantity, the catégory X30 Super, that of Élites, will offer a plateau qualitatively high and homogeneous ! Very fast since the satrt of the season, Ulysse De Pauw has hardly been well served by success…Betrayed by mechanicals at Mariembourg and at Francorchamps, the young lad from the Brabançon region hopes that luck will smile upon him this time to be able to fight with equal arms to the end with Corentin Collignon from France. Leader of the competition , the latter knows that he certainly may not rest on his laurels this weekend. Crouching in the shadows of these two, William Godefroid is ready and waiting to rise to the occassion at the smallest opportunity. 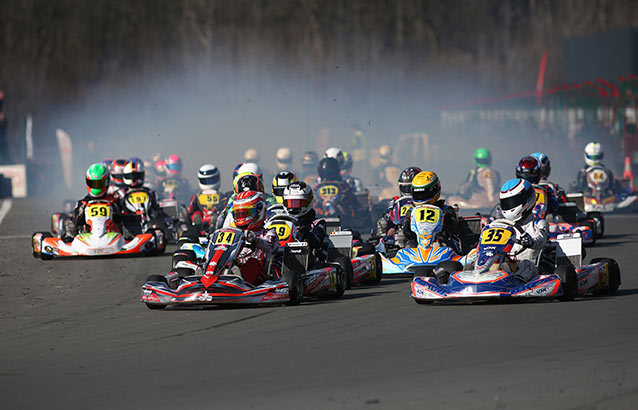 X30 Senior : Total indecision !
Explosive ! Bringing together no less than almost sixty drivers from eight differents countries, the category X30 Senior (accessible as of 14 years) promises a great spectacle during these two days of racing. Briefly leaving the reins of the competition in the hands of his compatriot Xavier Dias after the qualifying heats in the Ardennes, the French driver Franck Chappard recovered his provisional throne in the Final even although he did not particularly shine in it . Finishing only fourth, the young driver from the Ile-de-France region had to make the most of the mechanical disappointements of his rival henceforth distanced in the race to the title. Winner at Francorchamps, the Dutch driver Daan Steenman has climbed to third place and now joins Belgian drivers Ries Viverette et Hugo Tessarro in the chase behind Chappard.
As if the indecision was not great enough, some ex-hopefulls having shone the Belgian colours at international level will come to play it out with the young pretenders . This will be the case for Sébastien Bailly, Jérémy Peclers and Mathieu di Giacomo.

X30 Junior : Goldstein puts the pressure on Lomko
The proceedings will be equally passionate in X30 Junior where over 40 drivers between 12 and 15 years of age will come face to face. Authoritative winner at Francorchamps, the Russian Vlad Lomko will have a hard job keeping Elie Goldstein in check. Very regular,the grandson of François Goldstein from Brussels, five times World Karting Champion between 1969 and 1975, will want to give a last winning strike on the track at Genk to be able to take another national title after the one he won in X30 Cadet two years ago . Those who have moved up an age category since the beginning of the season, the rookies Valon Janssen (winner at Mariembourg) and Arthur Ronvaux, would like to finish this national campaign with flair and, why not, create a surprise.
In a very international peloton, it will also be extremely interesting to follow the performances of the Belgian hopefulls Antoine Potty and Xavier Handsaeme, the British drivers Zach Rippley, Jamie Rogers and Jeremy Walker, the Germans Josh Dufek and Dean Mussenbroek, the French Enzo Leveque and Jules Mettetal, the Spaniard Mari Boya, the Finn Leevi Litukento, the Danish driver Daniel Trager as well as the American Alejandro Jaramillo. 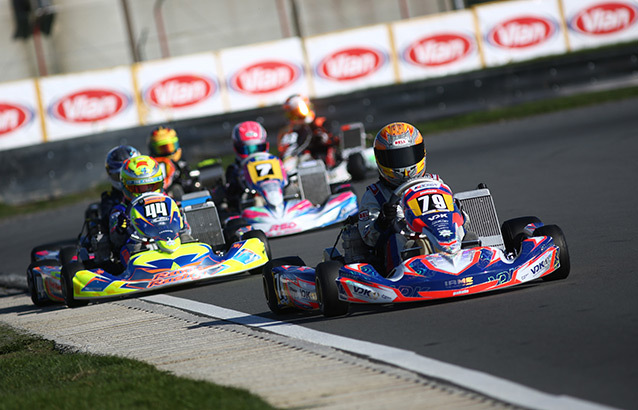 Already three times champion of Belgium in Mini, Johan Sinty has begun well in X30 Cadet (11-14 years). Growing intelligently in force during each race weekend, the young driver from Lahamaide has made the habit of surprising his rivals when the tension mounts. This is why he reigned as master in the Finals at Mariembourg and Francorchamps. As the saying goes « things always come in threes », but a certain Noah Maton, also excellent in his discovery of this category, would like to belie le proverb !

Even if the title will probably play out between these two, Alessandro Tudisca, Behhan Danhier and Darek Egyed will offer a battle with daggers drawn to gain the smallest step of the podium.

Mini : Ploeg as referee in the duel Abraham-Louis
Proof of excellent form in national karting, the category Mini is one with the most entries since the start of the season . At Genk, almost thirty future stars aged between 8 and 11 years will have rendezvous on a track who’s perfect trajectories remain in the memories of Max Verstappen and Stoffel Vandoorne. With this in mind, we are directed towards a three way match : all three authors of a “without fault ” at Mariembourg and Francorchamps, Kimmy Abraham and the Dutch lad Bart Ploeg dominate the top of the general classification. But these two must be aware of Victor Louis : showing excellent speed which notably allows him to dominate the Belgian ASAF Karting Series in front of Abraham, the lad from Rochefort hopes to surprise everybody on the line, especially as the suppression of the worst result will allow him to efface his worst result in the Final at Mariembourg. 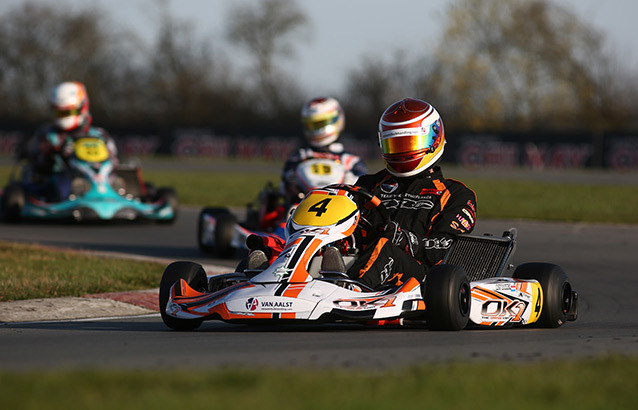 Completely opposed to the small chassis Mini propulsed by a motor Parilla 60cc ,on the scale of performances, the karts in the category X30 Super Shifter will delight the public lovers of extreme sensations in Limbourg. At the wheel of these machines équipped with a 6 speed gear box and a 175cc motor, the drivers don’t have time to be bored, especially when the national title is on the line ! Separarated only by one point (and perfect equality if we deduct their worst result), the Dutch driver Roy Bakker and the BelgIan Olivier Palmaers have shared the victories during the first two stages of the championship. This weekend, the sums are therefore very simple: he who finishes in front of the other will be champion !

Mathematically, Frederik Op de Beeck and the Dutch driver Jesse Smeets may still hope to win the title, but they would have to count on a big failure from the two leading men to emerge.

X30 Shifter : Grégoire … logically
Yet again with gear boxes,but equipped with a motor 125cc this time, the way seems to be open for Corentin Grégoire. Imperial at Mariembourg as well as Francorchamps, the young driver from Namur should, without disaster, take the crown Sunday afternoon. Especially as the category X30 Shifter will have no more than five drivers at the start : Cédric Collaers having moved to X30 Super Shifter, the top spots will be played out between Thomas Vansteenberghe, Youri Haumont, Raphaël Baertsoen and Anthony Marpaux.

X30 Master : Kieltyka still green
Ex Belgian hopefull, Fabio Kieltyka made a great come back in X30 Master this year. Amonst these drivers of 25 years or more and weighing more than 80 Kg, the driver from Liege is unbeaten since the first event in Mariembourg. His lead of 11 points in the championship (before deduction) gives him a bit of a margin against the competition , but he should be aware of David Jacobs particularly at ease at Genk, a circuit where the driver from Brussels took his first national title one year ago.
The nice surprise this season, the Frenchman Jonathan Wemaux who has always had his word to say and will always take the opportunity to shine if possible when present. Behind, in the absence of some regulars, the Luxembourg driver Alain Bazard and the Dutchman Wilco Schaaphok should be able to regain some places in the final classification of the championship.

Titles, but not only that !
Apart from the national crowns, various « carrots » are also in play this weekend. The first three in each category will receive a free entry to the IAME International Final which will take place at Le Mans from 9th to 15th October. The first ten Belgian drivers in X30 Junior, X30 Senior and X30 Super, as well as the six first Belgians in X30 Master, the three first Belgians in X30 Super Shifter and X30 Shifter, as well as the first five in Mini…will automatically be qualified for this event. Concerning the qualifying places for the Dutch drivers, these will be awarded at the final of their own championship at Emmen, at the end of the month of September.
Also, as part of the Monoplace Wheel programme organised by the RACB National Team, we would like to remind you that the two best Belgians in the championship X30 Super as well as the best Belgian in X30 Senior, will automatically be qualified for the second part of the selection which will take place at the wheel of a 4- and 2- stroke kart on a circuit to be decided on 27th September.

27 starts in the programme
With the X30 Senior peloton divided into 4 groups and X30 Junior into 3, no less than 27 starts will be given this weekend at Genk. The qualifying sessions will begin Saturday at 2.45pm and will be followed by the first eight qualifying heats…then the Drivers’ Presentation at 6.40 pm. . On Sunday after the Warm-Ups, eleven qualifying heats will take place as of 9.50 am . Then as of 2pm the start will be given for the first Final . The Prize Giving Ceremony will take place as of 5.20pm, a geat occassionn to give applause to the winners of the day, and at the same time, the new 2017 Belgian Champions !