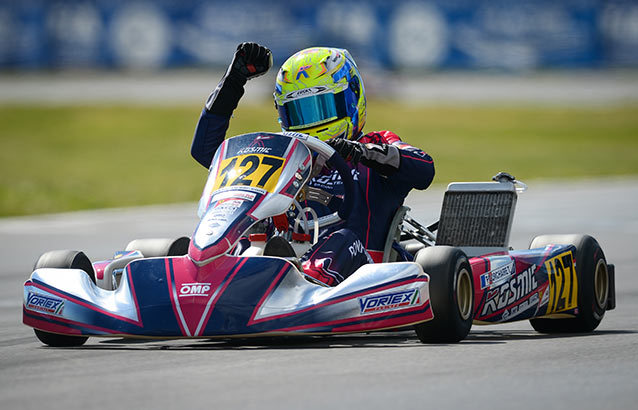 Théo Pourchaire is still only 13 years old but he achieved an an indisputable victory to start the European OK Championship in Italy among the best international karting drivers. Having recently joined the France Espoirs team, he confirmed his talent and ambitions in the Kosmic Racing team.

From the official timed session, with 70 drivers involved, Théo took pole position on the Sarno circuit. With three victories and a 2nd place in the qualifying heats, he made breathtaking progress at the wheel of his Kosmic-Vortex. Despite the pressure on his shoulders from his place in pole position on the grid of the Final, he succeeded in making an impeccable start and quickly widened the gap on his opponents. 20 laps later, he crossed the finish line as a great winner.

“I confess that he impressed me since the beginning of the season,” admits Olivier Maréchal, team manager of the Kosmic Racing Dapartment. Théo managed to manage brilliantly all the parameters: tyre wear, racing strategy, engine temperature to be monitored, carburettor adjustment …At Sarno, he took maximum points and is at the top of the overall standings. It has given the French team driver confidence.