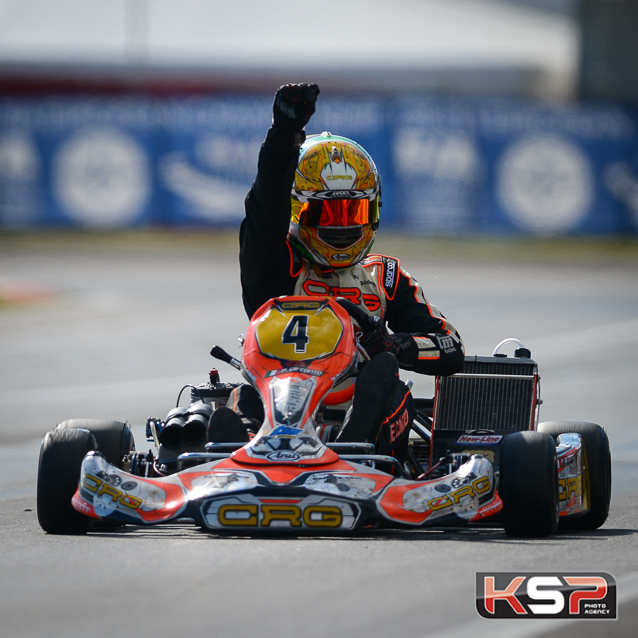 Anthony Abbasse (Sodi / TM) made a superb start to take the lead, Paolo de Conto (CRG / TM) lost places in favour of Simo Puhakka (Kosmic / Vortex) and Stan Pex (CRG / TM). Puhakka attacked the Frenchman under braking at the end of a straight, but the two drivers made slight contact. Abbasse fell to 6th ahead of Bas Lammers (Sodi / TM) who seemed to let him pass, while Puhakka retired shortly after, with a bent axle. De Conto swiftly took the lead from Stan Pex, and Patrik Hajek (Kosmic / Vortex) was 3rd in front of Jorrit Pex (CRG / TM). Meanwhile, Douglas Lundberg (Sodi / TM) was back in the top 10, followed by Felice Tiene (Birel ART / TM).

At the halfway point, Abbasse had managed to reach 3rd position, but he loosed his carb on the 12th lap. Lammers found himself behind Stan Pex, always quick to close the door and Jérémy Iglesias (Formula K / TM) was back in the fight with the fastest lap. Lammers finally found the opening on the 17th of the 20 laps to take 3rd place. Iglesias then tried to pass Stan Pex under braking, but the latter did not give anything away and kept his 4th position. De Conto won the race 2.4” ahead of Hajek and Lammers accompanied them on the podium after a 7-place climb. Mirko Torsellini (CRG / TM) struggled for 6th position. Lorenzo Camplese (Parolin / TM) saved a tough weekend with a remarkable comeback to 7th place with no less than 15 places gained. Tiene finished 9th and Pierre Loubère (Zanardi / Parilla) finished well in the 12th position (+11 pl). 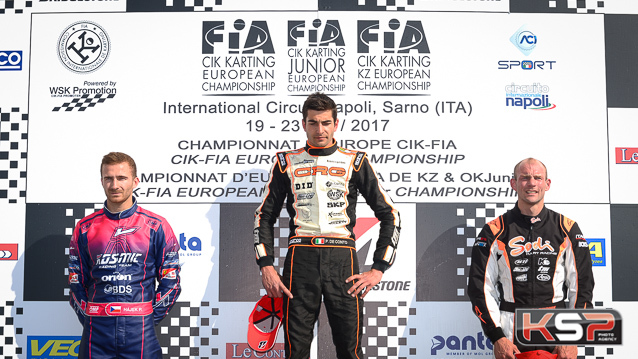