Two KZ qualifying heats were scheduled for Saturday afternoon in Sarno, the last being scheduled for Sunday morning. The fight was fierce from the outset between drivers and machines which are very close in terms of performance. Only Marco Ardigo (Tony Kart / Vortex) missed out. Kartcom’s unofficial intermediate ranking gives you an idea of ??the positions. 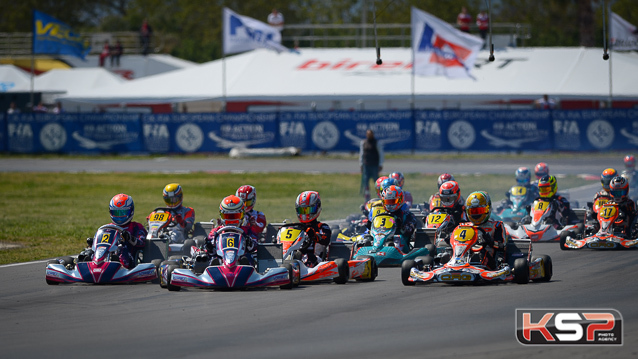 Patrik Hajek (Kosmic / Vortex) won the first heat, but his retirement in the second dropped him to 11th. His team-mate Simo Puhakka (Kosmic / Vortex) – 3rd and 1st – took the lead in the provisional standings, but Anthony Abbasse (Sodi / TM), 2nd twice finished each time in the wake of the Kosmic winner. Still on the limit, Paolo De Conto (CRG / TM) threw all his strength into battle in 3rd position, while Jérémy Iglesias (Formula K / TM) went up to 4th place ahead of Ben Hanley (Croc Promotions / TM). Bas Lammers (Sodi / TM) struggled to move up in the first heat after his troubles with Stan Pex (CRG / TM) at the start of the race. Dropping to 6th after a superb start in heat 2, Lammers placed 6th in front of his compatriot Jorrit Pex (CRG / TM). Douglas Lundberg (Sodi / TM) suffered a mechanical problem but still finished up 10th.