The European CIK-FIA season is on the starting grid 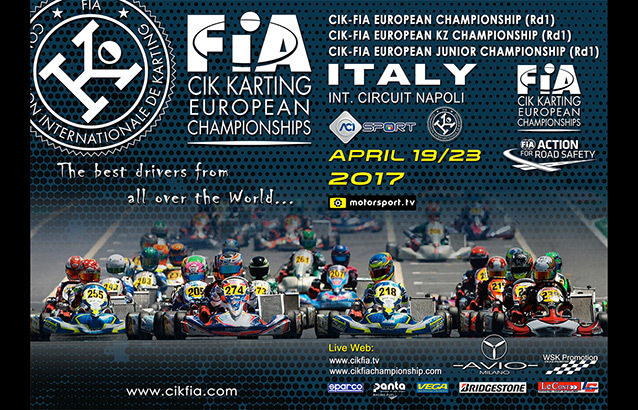 The European CIK-FIA Karting Championship is about to get its start. The first round is going to be hosted by the International Circuit Napoli of Sarno (near Salerno in Southern Italy), from next 19th to 23rd April, with the categories KZ, OK and OK Junior. After the Italian season-opener, the European tour will continue in Belgium, then Spain, France, Finland. The last round of the Championship will take place in Sweden, at the end of July. In those 6 appointments there will be five rounds for the OK and OK Junior categories, four for the KZ and three for the KZ2; these races will take place alongside with the CIK-FIA Karting Academy Trophy, a competition on three rounds. The venue of the first appointment will be the recently renewed facility of Sarno, with its 1,547 metre-long track. There will be around 179 entrants in the three categories.

WSK promotes the event on video.
WSK Promotion, as usual, will promote the World and European CIK-FIA Championships on video. The live streaming of the Championship will be available on cikfia.tv and cikfiachampionship.com. The broadcast from Sarno will start on Sunday 23rd April at 10:00 am and it will continue until the end of the programme at 04.40 pm. The following week don’t miss the appointment with the special TV report on Motorsport TV.

The protagonists in Sarno.
The reigning European KZ Champion is Marco Ardigò (Tony Kart-Vortex-Bridgestone) and he is ready to fend off the attacks of his rivals who have already put in outstanding performances in the first international events of the 2017 season. Among them, special mention for the Dutch Bas Lammers and his team-mate, the French Anthony Abbasse (Sodi Kart-TM); also the Czech Patrik Hajek (Kosmic-Vortex) stands a good chance. The 2016 OK Champion, the Spanish Pedro Hiltbrand (Tony Kart-Vortex-LeCont), is the driver to beat in his category. His main rivals, according to the results of the beginning of season, are the English Clement Novalak (Tony Kart-Vortex), the Polish Karol Basz (Kosmic-Vortex) and the British Tom Joyner (Zanardi-Parilla). The OK Junior is going to be rather unpredictable, given that the 2016 Champion, the British Finlay Kenneally, moved to the upper category as well as lots of the protagonists of the last European Championship.