The WSK Super Master Series waits for its winner 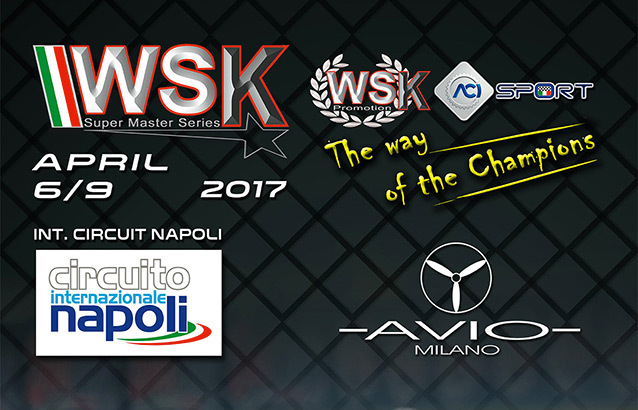 Next weekend in Sarno (Salerno. Italy), the International Circuit Napoli is hosting the last round of the WSK Super Master Series. The round follows the season-opener which took place in Adria (near Rovigo) at the end of January, and the events in Castelletto di Branduzzo (near Pavia) and Muro Leccese (near Lecce). This international series, promoted by WSK Promotion, ends in Campania with outstanding figures in matter of participation of drivers.

The over 260 entrants in Sarno show how much drivers yearn for the final victory, which will be awarded at the end of the four rounds. Next week’s appointment, moreover, takes place just before the beginning of the European CIK-FIA season, due to start two weeks after the WSK event at the very same facility of Sarno. All the phases of the race, which is going to be as heated as ever, will be available on the official website www.wsk.it, which will provide news and results from the 1547-metre-long track. The high point of the whole event will be on Sunday 9th April, with the live streaming of the event finale, from the Pre-finals to the prize-giving ceremony in the afternoon.

More points to be awarded in Sarno.
Drivers will start their racing weekend during free practice on Thursday 6th April. Just after the qualifying on Friday 7th, heats will take place, until Saturday 8th; it will be then that the first points will be awarded, according to the standings of the first two days of competition. The final output of the race is even more uncertain and unpredictable thanks to the overall amount of points; there are, in fact, 153 points to be awarded, thanks to the incremental scoring system, which allows a great number of drivers to aim at victory.

The leaders of Muro Leccese defend themselves in Sarno.
The current leaders of the standings are ready to defend themselves against a numerous pack of dangerous rivals. In KZ2 the Dutch Bas Lammers (Sodi-TM-Bridgestone) has to defend his leadership against the attacks of his team-mate, the French Anthony Abbasse, and of the Czech Patrik Hajek (Kosmic-Vortex). The British Clement Novalak (TonyKart-Vortex-Bridgestone), winner of the OK Final in Apulia, has to keep at bay the Belgian Ulysse De Pauw (Kosmic-Parilla) and the Spanish David Vidales (TonyKart-Vortex). In OKJ, the Italian Andrea Rosso (Tony Kart-Vortex-Vega) is still the leader after his victory in Apulia; Leonardo Marseglia (Zanardi-Parilla) is in second position ahead of the English Harry Thompson (FA-Vortex). In 60 Mini, first position for the Russian Nikita Bedrin (Tony Kart-TM-Vega), ahead of the two Italian drivers Gabriele Minì (Parolin-TM) and Andrea Antonelli (Tony Kart-Vortex).