Last weekend (July 15th-17th), the 1.360m long track in Belgian Genk was the location of the German Kart Championship’s half-time event and welcomed a record field of participants. 189 drivers from more than 25 nations showed thrilling races in best weather, with numerous new winners. 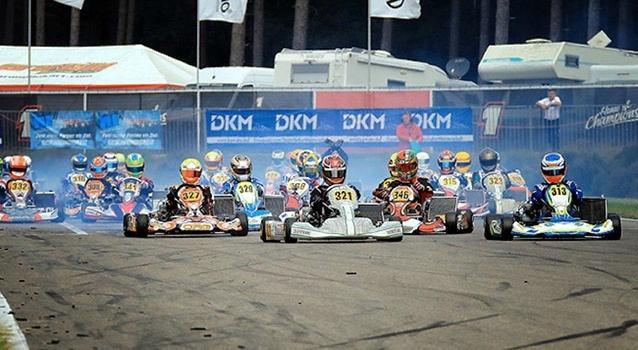 After Wackersdorf and Ampfing, the four grade series of the German Kart Championship travelled to Genk for the third of overall five events. The 1.360m long track was on the DKM racing calendar for the sixth time and welcomed a record field of participants. 189 top-class drivers started in the classes DKM, DJKM, DSKM and DSKC. Two weeks before the CIK-FIA European Kart Championship finale at the same location, numerous teams and drivers used the races as preparation – which made the ranked races accordingly exciting.

Under best weather conditions the races were peppered with numerous overtaking maneuvers and new winners. In the evening, Enrico Prosperi, Patrick Kreutz (both DSKC), Marco Ardigo, Paolo de Conto (both DSKM), Dennis Hauger, David Vidales (both DJKM), Hannes Janker and Paavo Tonteri (both DKM) ended up on the top positions of the winners’ podium.

The DMSB Shifterkart Cup impressed with thrilling kart racing in Genk as well. The field was filled to the last place with 34 drivers. Fastest driver of qualifying was Max Tubben (CRG Holland), but he had to pass on his lead to Enrico Properi (Renda Motorsport) during the course of the heats. The Spaniard had the best starting position after the heats and was able to use this during the first ranked race.

This began with a beat of the drum though: Max Tubben dropped out of the race after the initial lap and became an involuntary spectator. At the front, Properi was able to tie in with his strong performance of the heats and secured the first victory. “I’m very content and happy about my first victory at the DSKC. Towards the end of the race the pressure from behind became a bit stronger, but I was able to hold my position”, the Spaniard summed up. Regarding the second place, Andreas Johansson (CRG Holland) and Tobias Mähler (Kartshop Ampfing) showed a thrilling fight. During the sixth lap, the duo collided though and both had to end the race prematurely. Nico Jöcker (Kartshop Ampfing) took the position of the first pursuer in front of Christoph Hold (Maranello Kart), Maximilian Paul (NKS for Racing) and Patrick Kreutz (RS Motorsport).

Just like at the kick-off in the morning, Prosperi achieved the best start during the second race as well. Instead of driving away from the field the Spaniard became pressurized though and had to drop out of the race after four laps due to a technical difficulty. Kreutz took the place at the front in the meantime: The Hessen resident wasn’t able to take it easy though – his pursuers David Detmers (MSR Motorsport) and Max Tubben got closer. Kreutz didn’t let anyone take away his first DSKC victory though: “This is an unbelievable feeling. After taking the lead I was able to drive away from the field easily. In the end it got really close again though and I had to fully attack.” Man of the race was Tubben. After his falling out during the first race, he fought his way forward from the end of the field to second place. Detmers came in third in front of Christoph Hold (Maranello Kart) and Maximilian Paul (NKS for Racing).

The world elite of shifterkart drivers started at the ranked races five and six of the DSKM. Maranello Kart factory driver Tommaso Mosca (Maranello Kart Srl.) got the best time during qualifying. Czech Patrik Hajek (Kosmic Kart Racing Departement) won the heats though – with three victories he was accordingly content on Saturday evening: “This was a really good day for us. The speed is right and fills me with confidence for tomorrow.”

From pole position, Hajek continued his success drive during the first final race. After a perfect start the Czech drove into the first bend as the leading driver and didn’t give his opponents any chance for attacks. He didn’t win in the end though. Towards the middle of the race he had to drive into the off due to a defect. Anthony Abbasse (Sodi Kart Racing Team) took his place, but the Frenchman held the top position only for a short while too. Marco Ardigo (Tony Kart Racing Team) rushed forward and took the lead. During the remaining laps the multiple Kart World Champion was the fastest driver of the field and drove away from his opponents. “Our tactic worked. My new tires were the fastest of the field and secured the second victory of the season”, the Italian rejoiced. Abbasse achieved a safe second place followed by Davide Foré (Gold Kart Racing Team), Jorge Pescador (Praga Kart Racing Team) and Tommaso Mosca.

Paolo de Conto (CRG Holland) had the right tire tactic during the second race. With four new tires he rushed passed his opponents and won his first DSKM final of the year. “We knew that the tires would be an advantage for us and wanted to use this. It was a great race and everything worked. The result fills me with confidence regarding the European Championship in two weeks as well. All the top drivers started here”, the Italian summed up. The rest of the places were taken quickly as well. Frenchman Abbasse finished second again in front of Jorrit Pex (CRG Holland). The former DSKM-four-time Champion fought his way forward on his home track from the field of pursuers to third position. Local driver Bas Lammers (Sodi Racing Team) followed on fourth place in front of Marco Ardigo.

The 64 world-beating young drivers started at the German Junior Kart Championship. The two guest drivers Isac Blomqvist (WARD Racing) and Victor Martins (VDK Racing) dominated the events during qualifying and the heats. On Saturday evening Martins was in the lead with two victories and a fourth place.

The first final race of the juniors started spectacularly as usual. Numerous favorites already dropped out during the first bend. In the meantime Dennis Hauger (CRG Holland) fought his way to the front position. The Norwegian overtook Oscar Piastri (Ricky Flynn Motorsport) and drove towards a safe victory. “I’m driving in Genk for the first time, which makes it even better to win immediately. Thereby I’ve collected important points regarding the Championship”, the CRG-protégé rejoiced at the finish line. Behind him, the two guest drivers Martins and Piastri held their grounds and ended up on the remaining podium positions. The leading driver of the Championship Chales Milesi (Tony Kart Racing Team) narrowly missed this on fourth place. David Vidales (KSM Schumacher Racing Team) from Spain achieved fifth position.

Vidales showed a sensational start from the third starting row during the second final race and already drove to the front of the field during the first lap. While his pursuers fought hard fights for positions, the KSM Schumacher Racing Team’s driver achieved a considerable lead. An accident in midfield interrupted his victory course though. The race was interrupted and undid Vidales advance. He kept his nerves though and drove away from his opponents again. The youngster’s first victory causes new excitement regarding the fight for the Championship title. “This was the first race on this track for me. I immediately felt comfortable and would like to thank my team and my family for their outstanding support. I still have all chances regarding the Championship with my third place.” Hauger followed on second place in front of Theo Pourchaire (Kosmic Racing Departement), Martins and Kas Haverkort (CRG Keijzer Racing).

The field of the German Kart Championship was pleasantly strongly manned as well. 30 international top drivers started there. Alexander Smolyar (WARD Racing) from Russia dominated the events on Saturday. After pole position at qualifying he was able to defend his lead during the heats with a victory and a second place.

At the beginning of the first final race everything went in favor of the Tony Kart driver. From behind, German Hannes Janker (CRG TB Racing Team) put pressure on him though and took the lead after only two laps. Until crossing the finish line he didn’t let anyone take it from him then. “We used this weekend as Euro-preparation and are in the best mood after the victory”, the Franconian commented on his success. With a secure distance Smolyar followed on second place. Third winner Paavo Tonteri (CRG TB Racing Team) was the best DKM regular. Fourth place went to Tony Kart-factory driver Clement Novalak followed by reigning Kart World Champion Karol Basz (Kosmic Racing Departement).

After achieving third place at the first race, Tonteri came out on top during the second final of the German Kart Championship. Together with his team mate Janker he drove away from the rest of the field during the first few meters and took the lead. Janker lost some ground though and fell back to fifth place during the remaining course of the race. Tonteri was unstoppable and increased his overall lead with his second victory of the season. “The team did a great job again. The Championship stays interesting despite my small advance”, the Finnish rookie rejoiced at the finish line. Second winner Basz drove a calm race as well in front of Smolyar, Bent Viscaal and Janker.

In the upcoming weeks the DKM is taking a short break. Things are going to continue from September 9th-11th at the Motorsport Arena Oschersleben. The fight for the title stays exciting in all classes and promises top-class kart racing in the Magdeburger Boerde. “We’re very content with the course of the season so far. The fields of all four classes are strongly manned and of a world class level. Drivers, teams and organization have done great jobs in Genk. The narrow Championship rankings make everyone want more”, DKM series coordinator Stefan Wagner sums things up positively after the season half-time.