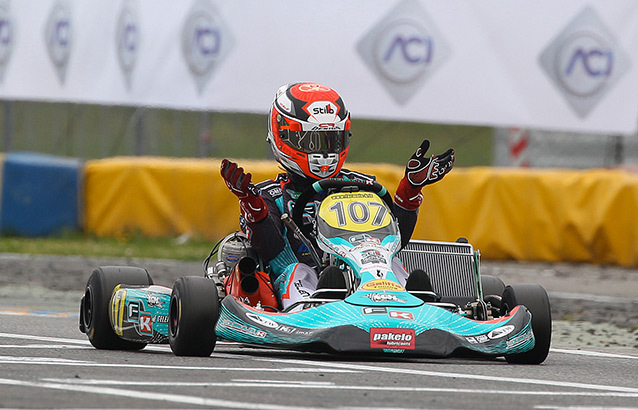 KZ2. The most performing category, KZ2, saw an intense battle to name the 34 finalists out of the 55 entered drivers. Race-1 was won by the quick Francesco Celenta (Formula K-Tm) who was victorious since the opening of the weekend as he set the pole position and was first after the heats too. In Final 1 Celenta took the win leading Massimo Mazzali (Croc-Tm) and 2015 Italian Champion Riccardo Longhi (CRG-Tm), while Mirko Torsellini (Exprit-Tm) was stripped of the fourth place due to a penalty in consequence of the mispositioned front fairing after a contact, slipping down to the tenth place. Tommaso Mosca (Maranello-Tm) inherited the fourth place proceeding Matteo Viganò (Top Kart-Parilla).

Race-2 was run with top 8 grid inverted and Mazzali got the lead bu the Final got inflamed by Torsellini’s comeback who managed to get back all the places up to the second position, crossing the finish line in the slipstream of Mazzali. Great comeback for Celenta, who ended on the podium from the starting P8. Federico Pezzolla (EKS/TK-Tm) obtained a great P4 after a troubled qualifying, similarly Mosca was fifth, while Longhi had to settle for P6 in Race-2. 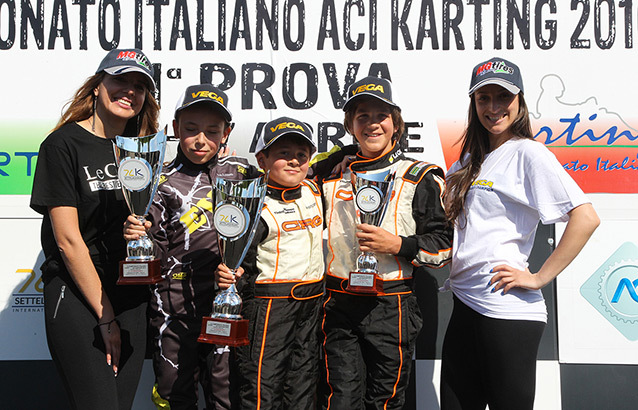 MINI. A great battle has been fought in 60 Mini, where the high number of entrants (70) required a lot of heats. In total, considering also the other categories, 24 heats have been run on Saturday. The first Final was won by Gabriele Minì (Energy-Tm) who proceeded Nicolò Cuman (Tony Kart-Tm) at the sprint to the line and the French Evann Mallet (CRG-Tm), while Alfio Spina won the second Final at the debut on CRG, proceeding the Spanish Moar Maestro Urbeliz, as Mallet was third again.

OK JUNIOR. In OK Junior, the victory of the first Final went to Nicolò Genisi (Formula K-Tm) at the end of several overtaking moves on the main contenders of the category, Marzio Moretti (Exprit-Vortex) and Alessandro Giardelli (Tony Kart-Tm) that ended behind Genisi in the order. Moretti and Giardelli went off the second final at lap one due to an incident. The race was characterized by Giuseppe Fusco’s comeback (Lenzo-Lke) who started from the back and got the lead in the closing laps. Behind Fusco, poleman Leonardo Papalia (Tony Kart-Tm) and the Indonesian Perdana Minang (Tony Kart-Vortex) rounded up the podium. Genisi was fourth.

ACI KART. The two new categories with Iame engines, ACI Kart and ACI Kart Junior (the latter reserved to 11yrs old drivers) produced a great spectacle despite the not so high number of drivers in this first round. In ACI Kart, Alessandro Di Cori won both Finals leading Simone Favaro, both on Tony Kart-Iame. Matteo Zamporlini (Tony Kart-Iame) was third in Race-1, while former Italian Champion Tino Donadei (Top Kart-Iame) rounded up the podium in Race-2.

PRODRIVER UNDER. Prodriver Under’s races were characterized by a lot of competitiveness. The victory in Race-1 went to Federico Centioni (EKS/TK-Tm), as Filippo D’Attanasio (Tony Kart-Tm) was second and Fabrizio Da Brutto (Maranello-Modena) third. Francesco Temperini (Tony Kart-Tm) won Race-2 from the pole position – due to the grid inversion. Behind Temperini, Francesco Alfiniti (CKR-Modena) and Andrea Fortuna (Tony Kart-Tm) completed the podium.

PRODRIVER OVER. Paolo Scagnelli (Energy-Tm) led the Prodriver Over race-1 from lights to flag after Pasquale Feola (LH-Tm) and Claudio Tempesti (BirelArt-Tm) had an incident, while fighting for P2. On the podium, behind Scagnelli Davide Colombo (CRG-Tm) and Daniele Cirelli (EKS/TK-Tm). Luca Giannecchini (Parolin-Tm) won race two instead, as Cirelli was second and Tempesti third recovering from the back.

All results are available atwww.acisportitalia.it

RECORDED BROADCASTS AND SPECIALS ON TV. Recorded broadcasts of the races will be aired by RAI Sport1 and AutoMotoTV, while specials will be housed in the Magazine ACI on AutoMotoTV, Nuvolari, Sportitalia, San Marino TV, Shakedown and some further specials will be broadcast by 50 local networks covering the whole Italian territory. The complete media schedule is published on www.acisportitalia.it.

GAZZETTA DELLO SPORT. The sports magazine Gazzetta dello Sport will dedicate a special commentary page with pictures to the round of Castelletto next Thursday April 21st.

The next round of the Championship will take place next 27-29 May at the International Circuit Napoli of Sarno (Salerno).