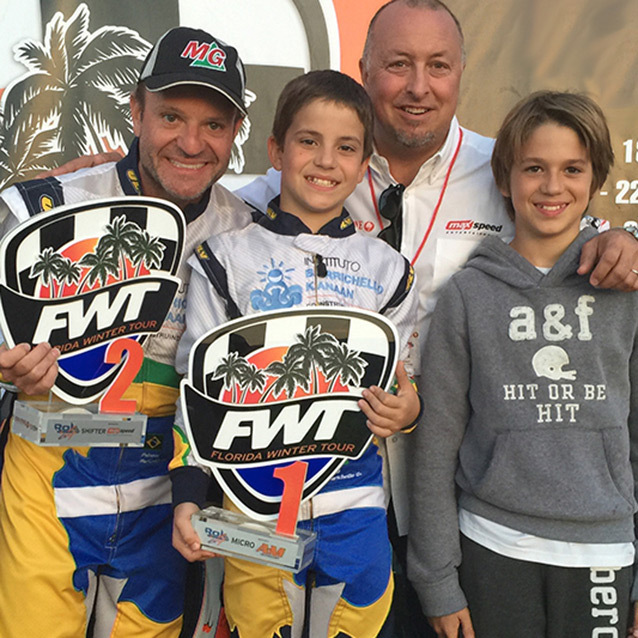 Formula 1 and IndyCar star Rubens Barrichello will again return to his karting roots and contest the 2016 Sofina Foods Florida Winter Tour Powered by MAXSpeed Entertainment. Confirmed for both the ROK Cup USA and Rotax weekends for the Homestead rounds, the popular Brazilian driver will team with the potent Ocala Gran Prix squad in ROK Shifter and Rotax DD2 MAX. Barrichello’s sons Eduardo and Fernando have also confirmed participation in Homestead, with the trio certain to be a threat in their respective classes.

“We welcome Rubens back to the Sofina Foods Florida Winter Tour. He is a great supporter of karting and an avid fan of the winter series,” explained MAXSpeed Entertainment’s Garett Potter. “Rubens showed well at the 2015 Rotax MAX Challenge Grand Finals in Portugal and is eager to compete during both the ROK and Rotax weekends of competition.”

“The Florida Winter Tour is a great place to race and provides the perfect setting for me to do what I love, spend time with my boys and compete at a high level,” said Barrichello. “I could not be happier to once again be with Ocala Gran Prix and have all three of us aboard Tony Kart chassis.”

Coming off a fourth place finish at the prestigious Rotax MAX Challenge Grand Finals in the DD2 MAX division, Barrichello placed second overall in the 2015 Florida Winter Tour ROK Shifter Senior standings, on the strength of several podiums and one main event victory. Adding more DD2 competition for the 2016 edition of the FWT, Barrichello is looking to bring his experience to the top as he competes against competitors nearly half his age.

Barrichello continued, “I like competition. I would rather finish fifth in a field of thirty talented and fierce competitors than dominate in a field of five, and I want my kids to have the same motivation that I do and the competition that is present at the Florida Winter Tour allows for this. I can’t wait until we get on track.” Barrichello currently holds the record for competing in the most number of Formula 1 races, with 326 starts.

Eduardo and Fernando both saw action in the ROK Cup USA weekend at the series opener in Homestead, as well as the Orlando events in 2015. Fernando swept the Micro ROK class last year in Homestead, scoring both final wins in commanding fashion. The youngest Barrichello will move up to the Mini ranks in both ROK and Rotax, while Eduardo will again see action in the hotly contested Junior divisions.

The 2016 Sofina Foods Florida Winter Tour Powered by MAXSpeed Entertainment is set for the season opening weekend at Homestead Karting, January 14-17 for ROK and January 21-24 for Rotax.

Live event streaming will be available starting Friday of each event weekend at: http://maxspeedentertainment.com/mse-live